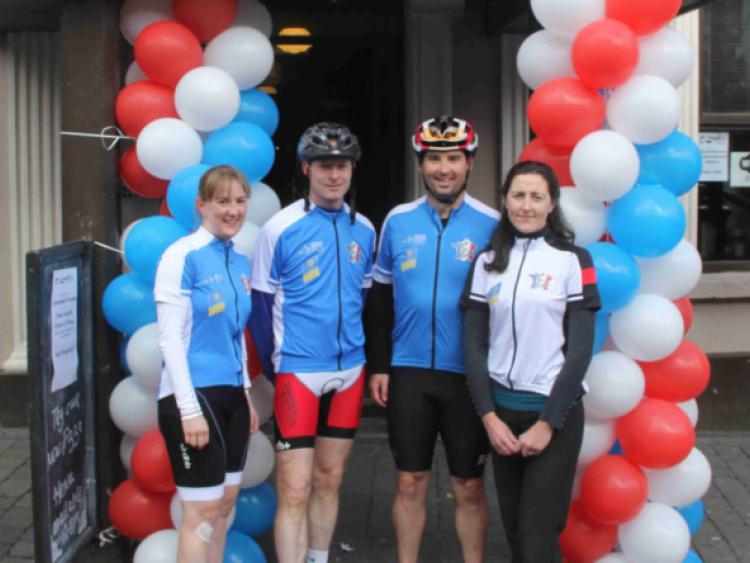 After a marathon 750km cycle from La Rochelle on the west coast of France, the three members of Portlaoise Rotary Club who undertook the ‘Cycle for SID’ arrived back in Portlaoise last Wednesday to a hero’s welcome.

After a marathon 750km cycle from La Rochelle on the west coast of France, the three members of Portlaoise Rotary Club who undertook the ‘Cycle for SID’ arrived back in Portlaoise last Wednesday to a hero’s welcome.

French flags were waved as Mary Callanan, Brian Bonham and Andrew Cremin crossed the finish line on the Main Street in Portlaoise escorted by local cyclists who had joined them for the last leg of their journey from Tullow.

Along the route on their final day they were cheered on by school children in Arles and Stradbally while a large crowd gathered in O’Loughlin’s Hotel in Portlaoise to welcome them home.

On their journey they encountered torrential rain, hailstones and biting Atlantic winds, and that was even before they got back to Ireland. Throughout the journey they were joined by Sarah Cooney who drove the support vehicle and was on hand to help whenever needed.

The cycle was organised to raise funds for the Sports Inclusion Disability (SID) Programme run by Laois Sports Parntnership. The programme is co-ordinated by local man and four time Paralympian Garrett Culliton. Piloted by Laois Sports Partnership in 2005, it has since been rolled out nationally due to its success in Laois.

Over 400 people with disabilities in the county directly benefit from the SID programme by joining in the wide range of different sports and physical activities made available. However due to funding cutbacks, Laois Sports Partnership currently needs to raise €25,000 annually to sustain the programme. The Cycle for SID fundraiser is a major aspect of the fundraising programme.

On their seven day marathon cycle, the intrepid trio visited many notable cities on the west coast of France including Rennes, Nantes and Granville before taking the ferry from Cherbourg to Rosslare.

When they arrived back in Portlaoise, they stopped in O’Loughlin’s Hotel where friends, family and supporters gathered to welcome them home.

Laois Sports Partnership Chairman John Finn thanked the cyclists for their efforts and outlined the importance of the fundraising for the SID programme.

Although this year’s event has just finished, plans are already being put in place for next year’s Cycle for SID.