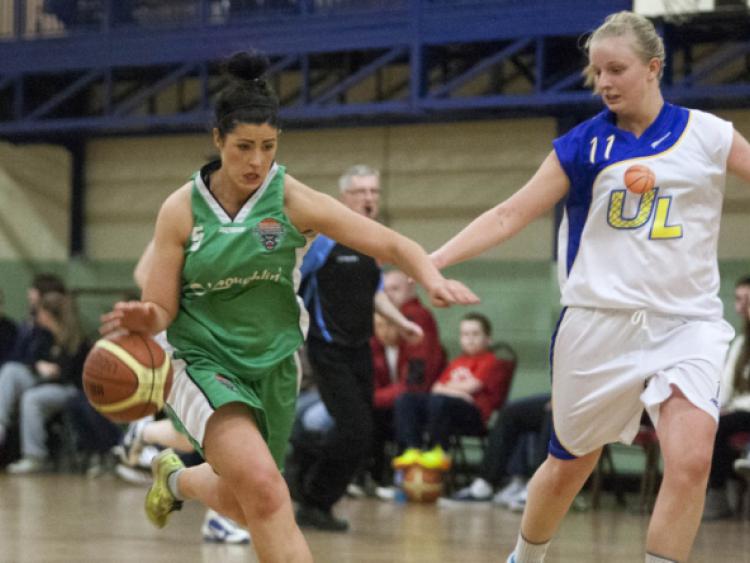 O’Loughlins Panthers played host to UL Huskies on Saturday night in what was a meeting of the top and bottom of the league.

O’Loughlins Panthers played host to UL Huskies on Saturday night in what was a meeting of the top and bottom of the league.

The difference was notable early on as the home side took control of the game and by half time Portlaoise had already accumulated a twenty four lead which they never relinquished. With other results going their way this weekend it now sets up a top of the table clash with NUIG Mytics next Saturday in Galway with the winner taking first spot outright.

Portlaoise started this game at an amazing pace with all five players getting out on the break following their dominant play under their own boards. UL Huskies were struggling to get back on defence quick enough to stop Portlaoise breaking out and baskets from Nicola Farrell and Maeve O’Sullivan helped Panthers to build a lead.

The home side tried hard to close out the inside on defence and their tight zone was keeping UL’s post players at bay. UL worked the ball well in their offensive play and hit some nice long range shots through Owen and Murphy. With UL sitting back in a zone defence Portlaoise worked through their offences and picked off Limerick both inside and outside.

The second quarter saw Portlaoise step up their intensity on defence and switch to man to man. This put massive pressure on the UL team and this showed throughout the quarter with the visitors registering only one score from play along with a free throw.

With the Huskies changing up in defence also to counteract the Panthers shooting game, the home side changed up their point of attack by working the ball inside. The visitors were under severe pressure and resorted to fouling Portlaoise’s post players and the home side continued to punish this indisipline with eight points from the free throw line Jackie Coleman and Sharon Melia getting off the mark.

A further four points from Nicola Farrell finished off the half and gave Portlaoise a commanding lead on a scoreline of 35-11.

The third quarter was rather frustrating for the Portlaoise coaching staff with UL outscoring Portlaoise by eight points. Although the game was over as a contest at halftime Portlaoise were looking at pushing on and working hard both ends of the floor.

Portlaoise were find it very hard to get back into a rhyth, amd looked to have switched off after an excellent first half display. Although the full panel saw great minutes throughout, coach Peter O’Sullivan would’ve been looking a full game performance. Sharon Regan got her name on the scoresheet with a brilliant three pointer from the corner.

This got the home team going again and captain Catherine O’Sullivan stepped up to score a further six points coming off the picks to take her opportunities. Sinead Nihill was rewarded for her great work under the boards as she added another two points with a put-back basket to keep her side out of reach.

Portlaoise went back to basics in the final quarter and focussed on keeping Huskies to another low scoring ten minutes. Again it was the Panthers break play that was proving the difference between the sides as UL continued to be undone on the counter attack with Nihill and Tracey Fallon scoring six points on the break between them.

In reply Huskies could only score seven points in the quarter as Portlaoise knuckled down to the task in hand. Maeve O’Sullivan was again controlling the game from the point position for the home side and added a further seven points to her game high tally of nineteen in the quarter.

Deirdre Tomlinson rounded off proceedings with a lay-up on the break to give her side a convincing twenty seven point lead on a scoreline of 64-37. Portlaoise will now travel to Galway next Saturday in the hope of cementing their place at the top of the table against NUIG Mystics.