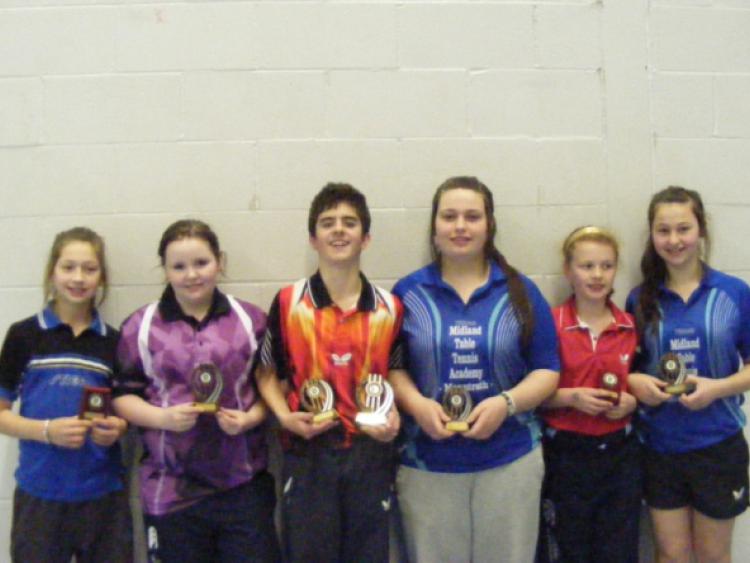 Dylan Grace and Kate Whelan both continued long winning streaks to capture their events in relative comfort. This was no disrespect to other players but more the fact that Grace and Whelan are in tremendous form right now.

Grace continued his form from U-15 to U-18 where he and Scott Jestin both produced excellent table tennis skills to reach the last four. Here Jestin was up against eventual winner Charlie Fitzgerald who had the edge on him in three sets, while Grace was overcoming a difficult opponent in Conor Gallagher. In the final the experience of UCD’s Fitzgerald carried him through to take gold.

Many other fine performances on the day saw Tiegan O’Connor reach U-13 final where she took silver and Jessie Hayes while not at her best still managed to take bronze. Amylou Hayes took bronze to whelans gold at U-18. Bronze also on the day for Ross Handcock who performed well.

Amy Jestin and Corinna Hayes also got in on the act of collecting silverware as did Alex Sisko from Newbridge who was entering his first Leinster event. Well done Alex. Claire Handcock was also in fine form over the weekend and only came unstuck when she lost to clubmate Jessie Hayes in the three-place playoff in U15.

In both matches Mountrath came out 6-0 winners. Thanks to fine performances from Jessie Hayes, Sarah O’Connor, Nadia Krawczun, Leanne Delaney, Claire Handcock and Hailey Hayes. They have an upcoming trip to Clondalkin to play Deansrath in the coming weeks before return visits to Mountrath from their city rivals.