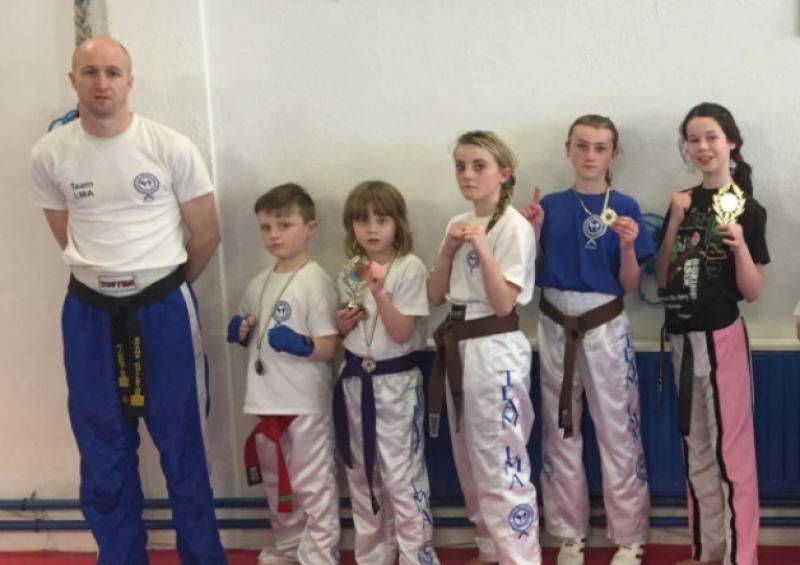 Laois Martial Arts have been busy as usual, with the Mountmellick based club in action since late January at the New Year’s Open.

Laois Martial Arts have been busy as usual, with the Mountmellick based club in action since late January at the New Year’s Open.

The team of nine fighters competed at various levels, with six competing at the Advanced level. First up for the team in the novice section was Ryan Millard who fought very well on the day and was unlucky not to take home a medal.

Stephen Lynch and Ronan Dunne competed next for the club, with Stephen taking home a third-place trophy on the day. Coach Shane Culleton commented “The novice fighters have come on a lot over the past numbers of months and did very well at a competition of that level.”

The Elite members of the team were next to take to the mats. Brothers Byron and Corey McGuirk both fought well on the day and were unlucky not to come away with a top spot. They both faced new opposition on the day which was good for their development as fighters.

Chloe Shortall-Culleton fought the WOMMA World gold medallist in her first fight losing out to a close decision. “Some of the decisions can be disappointing” admitted Shane Culleton afterwards. “Team LMA fighter fighter Rachel McInerney fell on the other side of a bad decision on the day but she fought to her full potential. The team always handle the decisions on the day with the respect that the sport deserves. I was very proud of them all on the day.

Senor fighters Thomas Horan and Mick Horgan were competing in the Novice Mens Section. Thomas had trained hard leading up the competition and walked away with third place on the day.

Next up was Mick Horgan, who was on the mats for the second time this year and after a long wait, he had a hard fight and gained some great experience.

The club took a break from competition till late February due to Black Belt Gradings at the club. Juniors Byron McGuirk (11) and Martine Daly (9) who have both been training at the club for over six years passed their grading after five hours of an examination which consisted on fitness drills, coaching, sparring and padwork.

Leading up to the exam the Junior Black Belts had to commit to training 3 – 4 times a week for a year or so, which impressed their coach “Their focus and determination, for two young kids, was a great inspiration to all the members in the club and indeed all the young kid in the local area.”

The club now has eight black belts, five of which are under twelve years old which is amazing considering the work and dedication it takes to become a black belt.

The team competed next on the 22nd of February in the Black Dragons IKF Interclub in Galway . This was the fighters first ring show of the year and they all got off to a great start.

A tough day of fights which saw Odhran Dunphy, James McInerney , Stephen Lynch, Corey McGuirk, Ryan Millard and Jason Lee in the ring for the first time was a big learning curve for all involved.

Elite Team fighters Byron McGuirk and Joeleen McInerney were also in action on the day, Byron coming away with a draw and Joeleen winning in stunning fashion with constant pressure from the start of the bout.

In total on the day we came away with three top spots on the day and some valuable experience.

The team are in action next in the Junior All Irelands Kickboxing Championships in Leixlip, Co. Kildare at the end of March. A huge thank you to our main sponsor Moloneys Gaelic Bar for their constant support.

For details on Kickboxing In Co. Laois contact 086-3399287 or find us on Facebook at Laois Martial Arts.