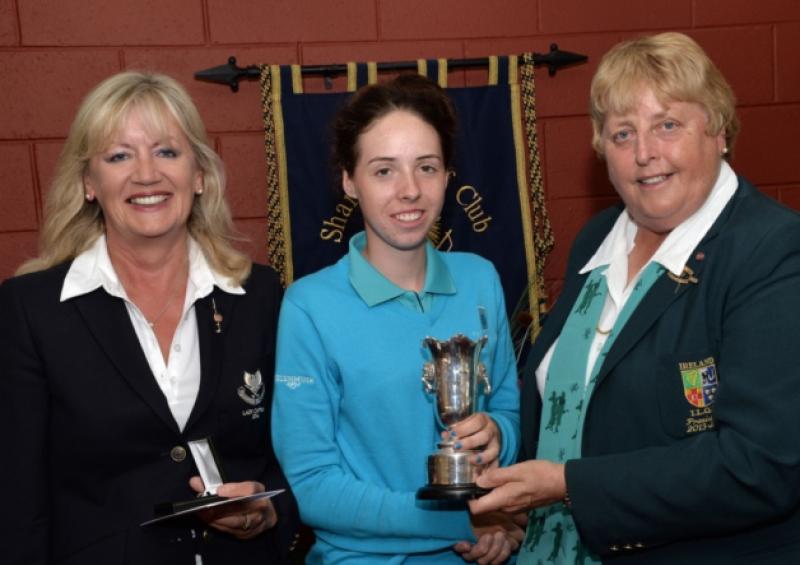 Portarlington GC golfer Meadhbh Doyle was toast of the club over the weekend after she claimed the Pat Fletcher trophy at the Irish Girls Close Championships.

Portarlington GC golfer Meadhbh Doyle was toast of the club over the weekend after she claimed the Pat Fletcher trophy at the Irish Girls Close Championships.

Meadhbh had to hold her nerve to claim the win in the plate final, as she was taken to an extra hole by Caitriona Griffin from Killarney, but she eventually broke Griffin’s resistance.

Another Laois golfer, Mary Doyle from The Heath, who claimed the Irish Ladies Close title earlier this year, was beaten in the final here 4&3 by Annabel Wilson from Lurgan.

The competition was played at Shannon GC, starting on July 16 last week. Meadhbh Doyle lost her opening round game to local golfer Lisa O’Shea, from Shannon GC, which saw her enter the plate final.

Rather than focus on the loss, Meadhbh regrouped and beat Rachel McDonell from Elm Park 3&2 to qualify for the quarter-finals.

There, she had a test of character against Molly Dowling from Lucan, but she held on to win 1up.

In the last four, she had here most comfortable win of the competition, as she proved far too good for Elisa Corcoran from Grange, claiming a 6&5 success.

That set up a final appearance against Caitriona Griffin, with the Killarney golfer trying to defend her title. Meadhbh ws looking good for most of the round, as she went 3up, but Griffin dug in and managed to square the game in the regulation 18.

Undaunted, Meadhbh secured the victory at the first extra hole to seal her victory after three days of intense competition.

In the Irish Girls Close championships, Mary Doyle from The Heath entered the competition as the leading qualifier, having already won the Women’s Close this year. She opened with a 3&2 win over Maeve Cummins from Lurgan.

That winning scoreline was repeated against Clare Calvert (RCD Ladies) in Round 2, and Ciara Casey (Hermitage) in the quarter-finals.

Down to the last four, Mary needed an extra hole before getting past Gemma McCarthy from Clonmel to qualify for her second national final of the summer.

Unfortunately, things’s didn’t go her way against Annabel Wilson, a 13 year old prodigy from the Lurgan club. Annabel got the par she needed on the 15th to claim a 4&3 win.