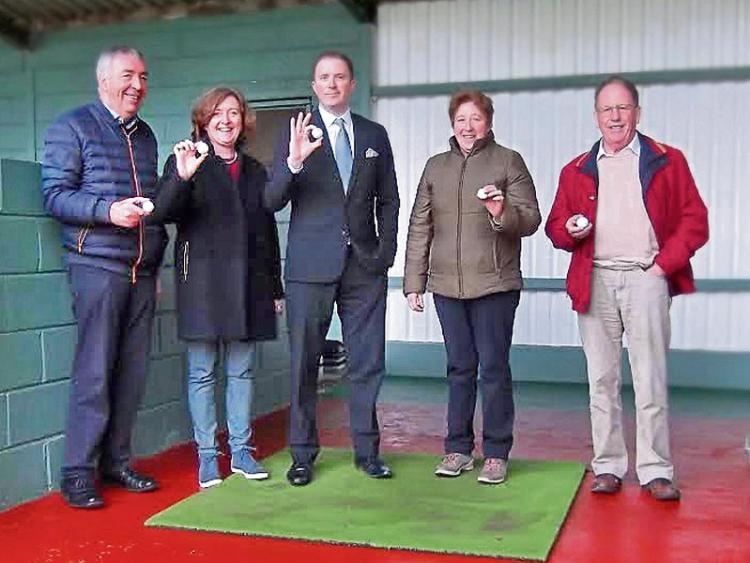 Coaching of the Leinster Elite Panels commenced on Saturday, 6th February at the Heath Golf Course under Provincial Coach, Eamonn O’Flanagan, who was a former professional at the club.

This is an U-18 Development Programme for promising young golfers and is being run for a period of ten Saturdays until early May. A panel of 30 players from midlands clubs includes golfers from The Heath, Mountrath, Portarlington and The Heritage.

This coaching course coincides with the recent upgrade of the 10 bay floodlit driving range under the supervision of Bob Roche and volunteering members. New mats and golf balls have been sourced and the range is open each day until late. Visitors and beginners are most welcome and tokens can be purchased at the bar in the clubhouse.

Resident Golf Professional is Mark O’Boyle. Mark served a four year apprenticeship under Andrew Gilbert at Carlow GC. He attended Birmingham University and qualified at the Belfry in 1995. In 1996 he took up the position of Head Professional at Cill Dara GC and in 2002 was appointed Professional to The Heath GC. Since then he has completed CPDs (Continuous Professional Courses) and attended coaching seminars. He plays on the Irish Regional PGA Circuit.

In 2012 Mark and local member John Farrell won the Irish Qualifiers Section of the PGA National Pro-Am Championships and represented Ireland in the overall finals in Cancun in Mexico. As well as running a well stocked shop, Mark organises demonstration days at the driving range which is attended by the top suppliers of golf clubs and where golfers can avail of custom fitting with launch monitors.

He organises junior coaching at Easter and this continues during the summer months. Adult lessons can be booked by contacting Mark at the Proshop or the Club Office.

Billy O’Connor was appointed head greenkeeper in 1982 by a committee which included Captain Gerry McCarthy and Course Manager, the late John Coughlan.

In those early days greens were cut with hand lawnmowers. No mowing was done from November to March and the fairways were not cleaned at all. Since then all has changed utterly.

Billy begins work at 5.00am during the summer months to get the course ready for competition. From April onwards the greens are mowed with ride-on mowers 7 days a week, tee boxes twice a week and all fairways once a week. Fairway sweepers were purchased in the late 80s and now sweeping is done 7 days a week.

Weekly duties can also include treating the greens and tee boxes, hollow tining, bunker maintenance, machinery maintenance and repair etc. He regularly attends green keeping courses in Kinsealy, Botanic Gardens and Croke Park. This enables him to comply with strict regulations in the management of The Heath’s unique landscape. Due to the recession, course staff has been reduced from 5 people in 2005 to the present 2 (1 full-time and 1 part-time - Fintan Dempsey is employed during the summer months).

Despite the cutbacks, Billy has maintained the course in great condition throughout the year and the superb condition of the greens has attracted widespread acclaim. He has been hugely assisted by the trojan work done by Course Manager Gerry Kavanagh and his course committee and also by the countless voluntary hours given by members.

This was most evident during the hosting of the Irish Under-16 Boys Amateur Open Championship last August which attracted golfers from all over Ireland and Europe.

Pat Finn, CEO of GUI, in his report to the Executive Committee remarked. "The Heath Golf Club was a tremendous venue on all fronts for this event - the golf course was in superb condition, the clubhouse provided a warm and friendly atmosphere and the club, supported by an army of volunteers, got behind the event in every way imaginable."