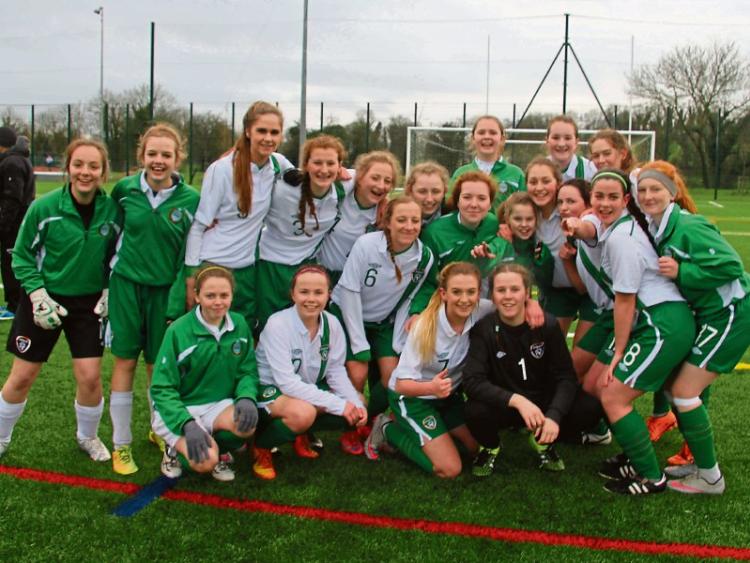 Having claimed their Leinster crown in extra-time the week before, the Portlaoise girls still found more in the tank to see off a brave challenge from a physically strong and hard-working Carndonagh team.

With both sides arriving on the back of a three-hour bus trip, they could have been forgiven for a lethargic start but they both equipped themselves very well early on. However, it was the Portlaoise side who got off the mark first after when team captain Colleen Rickard reacted quickest to poke home the loose ball following a great save from Emma Lawlor’s low shot.

Erone Fitzpatrick put in a tireless display on the day and she was unlucky not to double her side’s advantage but her low shot was brilliantly cleared off the line by the strong Donegal centre-back. Chriost Ri continued to dominated, aided by a gentle but icy Monaghan breeze, however they couldn’t add to their tally before the break and had Aimee Keane to thank for their lead at the break. Keane somehow got down to make a super fingertip save after a rare Carndonagh attack.

The Donegal girls began much brighter after the restart and it came as no surprise when they finally managed to get back on terms. A long ball over the top was only half cleared down the right wing and the Donegal striker surged forward to place an unstoppable shot beyond Aimee Keane.

That was the last real action of normal time as both sides battled hard to restrict any scoring chances, and nothing much materialised in the first half of extra time either. Marshalled by the superb centre-back partnership of Zoe Keegan and Maeve Phelan, and with Jenny O’Neill and Gillian Keenan and Elaine Daly working tirelessly in midfield, the Portlaoise girls soaked up the pressure and with four minutes left before the dreaded penalty shoot-out, Emma Lawlor once again popped up to send the Portlaoise side into the national final.

The talented striker barged through the centre and managed to stay on her feet despite the oncoming Carndonagh keeper’s hefty challenge and was left with the task of slotting the ball into an empty net.

The Portlaoise school now advance to the All-Ireland decider on March 2nd against Munster champions Presentation College Thurles who oversaw the Connaught winners Westport in the other semi-final.