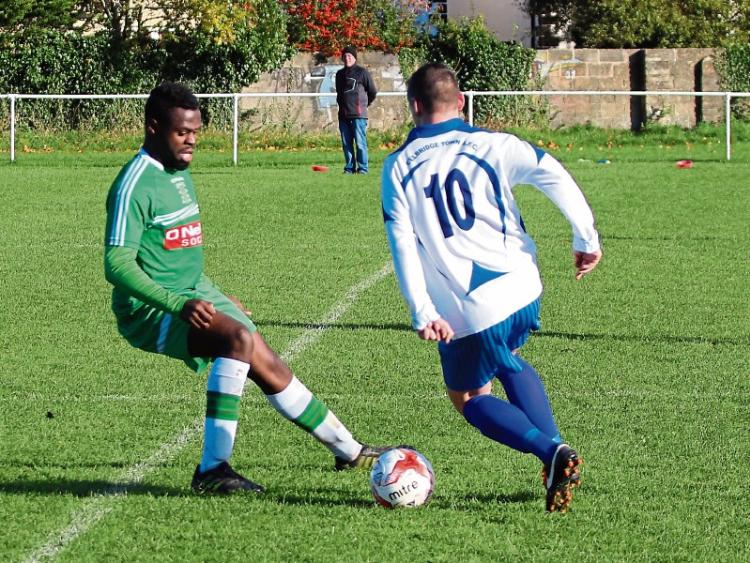 Portlaoise AFC first team secured a comfortable 4-2 win away to Celbridge Town on Sunday morning to stay in third place in the LSL Senior 1B table.

The visitors got off to a flying start and could have taken the lead on a number of occasions but a combination of off target shooting and brilliant goalkeeping by Damien Curley kept the scores level following efforts by Jason Murphy, Aaron Rafter, Colm Poole and Paul Cahillane.

The home side had two good chances to take the lead but Portlaoise went ahead on 16 minutes following a brilliant team move when Rafter side footed home a Jimmy Dermody cross.

On the half hour mark Curley again came to the rescue when flying full stretch to tip over a Martin Staunton header, but from the resulting corner Portlaoise went further ahead with a stunning goal.

Colm Poole’s delivery was met by a Jason Murphy overhead kick from 12 yards that flew into the top corner for one of the goals of the season.

The home side settled into the game and Portlaoise goalkeeper Graham Brody saved twice brilliantly then Staunton cleared off the line under pressure while at the other end Curley continued his heroics with a great save from Cahillane.

Brody save again early in the second half from Sean Moore as the game started to open up more, and Celbridge got a goal back when Adam Shaw finished at the back post after another great Brody save.

This stirred Portlaoise and Staunton went close after another superb team move then his left footed cross was volleyed home brilliantly by Rafter on 68 minutes. Mark Brennan then saved off the line after Niall Ferry had gone around Brody.

Portlaoise could have gone further ahead on 73 minutes when Jody Dillon's shot was saved. Rafter clipped the ball back to Cahillane but his volley cannoned off the crossbar. Moments later Cahillane and Poole linked up well for a corner and Eoghan White got free to finish at the back post for his third of the season.

The last 15 minutes were end to end as both side created more chances as Celbridge got a late consolation when Shaw’s free kick flew into the top corner.

Portlaoise welcome fourth placed Skerries Town to Rossleighan Park this Wednesday at 8pm as they look to move into second place.