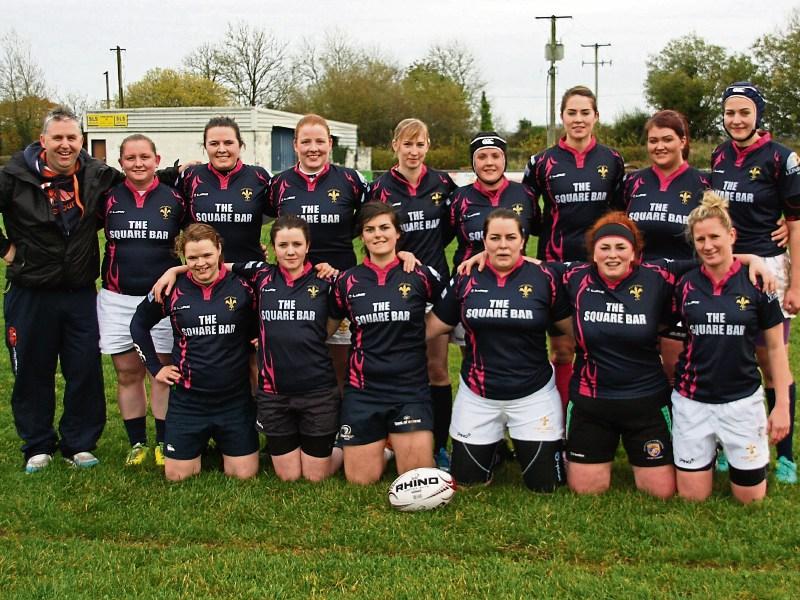 Portlaoise women played Longford RFC at home in the first of the return matches of the season.

Portlaoise were 12-0 winners in the first leg and fancied their chances in the rematch. The return of Éadaoín Griffin at scrum-half added an extra spark to an already energised back line of Louise Cody, Breda Kenny, Sarah Murphy, Emma Brophy, and Liz Brophy.

Portlaoise dominated play in the first quarter, but with staunch defence from a well-conditioned Longford side, scores were not easy to come by. Fennelly won eighty percent of Longford line-outs, effectively cutting of that set piece as an option for an opposition attack. Cody was impressive but was the target of a number of high tackles, eventually leading to a yellow card for Longford.

It was Liz Brophy who broke the deadlock with an incisive diagonal run that cut through the Longford defence and allowed her to score in the corner. The half finished with a 5-0 score line.

Longford pressurised in a well-matched contest in the second half but could not breach the Portlaoise defence. Portlaoise were more disciplined and their patience led to a five metre scrum.

The ever-sharp Éadaoín Griffin, emulating her Blackrock and Leinster sister Niamh, picked and out-foxed Longford to crash in un-opposed to score Portlaoise’s second try. The game ended with a 10-0 score confirming the Laois side’s position at the top of the table.

On Saturday Portlaoise U-18 girls met a well-drilled Clane side eager for a contest. In what proved to be an exciting encounter Portlaoise ran in five tries with three in reply from Clane. Aoife Bracken, Áine Camphuijsen, Dervla Breslin, and Alice Dunne were stalwarts in the forward line while Emily Horgan, Shannen Dunne, Charlie Walsh, and Sarah Miller provided a dynamic back line.

Emily Horgan, Alice Dunne and Charlie Walsh put their names on the score sheet while Shannen Dunne impressed as a play maker and first receiver. Camphuijsen was at her best in every department, while Breslin and Bracken gained ground going through the phases. Miller’s explosive runs contributed to the scores. Emily Horgan emerged as the Girl of the Game in which every player put in a sterling performance.

Meanwhile Portlaoise U-15 Girls had their first competitive encounter of the season with Athy. While the score line was not flattering the action on the pitch was most rewarding for the girls and the coach.

The level and intensity of tackling was superb and a tremendous improvement on the pre-season performance. Line formation of the backs was excellent and ball handling was impressive. The use of the rolling maul was a surprise and the discipline of staying bound was notable.

Portlaoise had no answer to the wide fast wingers of Athy and this proved decisive. Lessons will be learned from this encounter with a well-rounded opposition.

Portlaoise RFC welcomes new-comers to womens and girls rugby each Tuesday and Friday evening at 7:30pm. Why not give it a try.