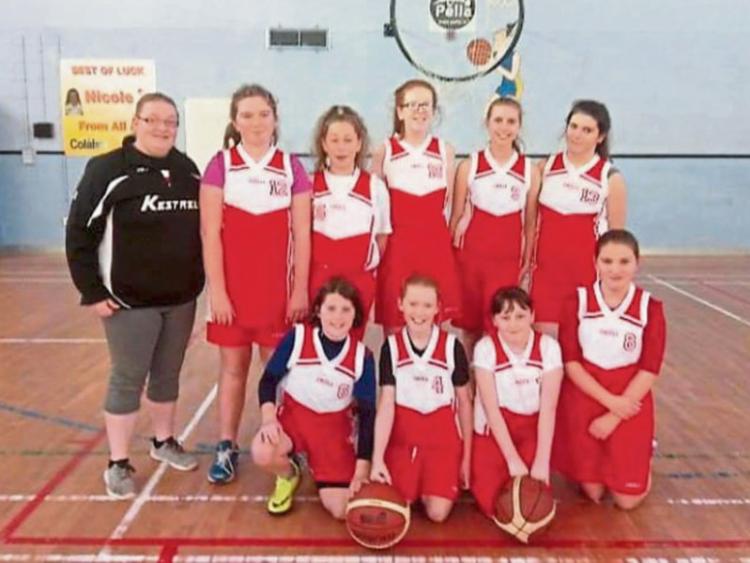 Kestrels U-14 girls red team played host to Portlaoise last weekend in their first round of the Midland Area League.

Portlaoise started the better team with Niamh Friel putting her name on the scoresheet more than once in the opening minutes of the game. Kestrels Kathlyn Delaney and Holly Hanway put in some excellent defence, while Dominika Reploska was the first to put a score on the board for the home team.

The second half saw Kestrels come out fighting with Sophia Higgins getting her name on the scoresheet for the first time for the home team while Mairead O'Byrne scored for Portlaoise.

Kestrels Neala Byrne and Steffie Lawlor played some excellent defence with point guard Micheala Moore driving to the basket to score the final basket of the game. While Portlaoise went away with the win Kestrels girls showed some great fight and spirit for their first game of the season.

Kestrels U-14 black team played host to Portlaoise last weekend in their first round of the Midland Area League.

Portlaoise started very strong with some great early baskets from Sinead Murphy, while Kestrels Ciara Maher replied for the home side. While Kestrels Aine Duffy, Aoife Fenlon and Ella Molloy put in some excellent defence they struggled to put scores on the board, giving Portlaoise the early lead at half time.

The second half saw Kestrels fight hard as Molly McCormack and Jessica Whelan both managed to get their names on the scoresheet. Portlaoise continued to score well through Aoibha Mulhall who managed to get a couple of unanswered baskets.

Bronagh Wearon, Eimear Hanlon and Nikola Marcel put in some great work on and off the ball for Kestrels. Portlaoise continued to score well through Grainne O'Reilly while Kestrels Megan Donagher, Amy Kelly and Montse Cruz played some excellent defence, however Kestrels narrowly lost out to a strong Portlaoise team.