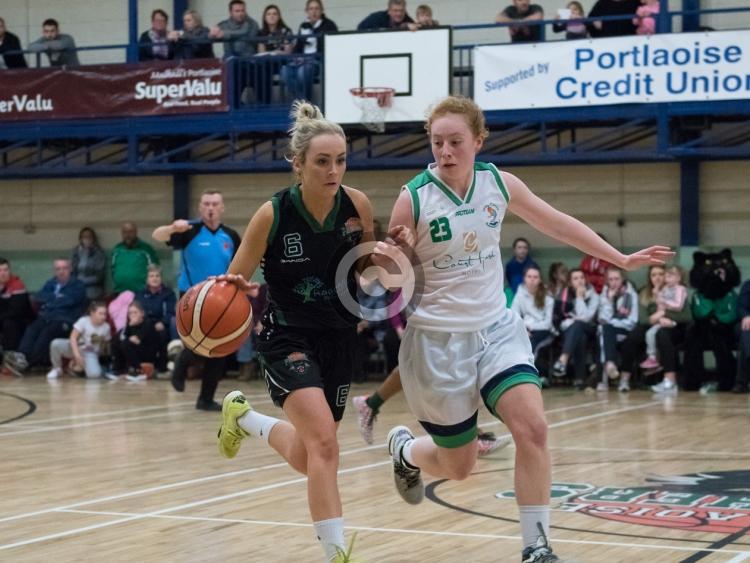 Having bagged their first win of the 2016/17 Super League season away to Meteors last weekend, and after experiencing all the highs from that victory, Portlaoise Panthers welcomed Liffey Celtics to a thronged St. Mary’s Hall on Saturday night trying to clinch their first home win of the season.

The capacity crowd were treated to an intense, exciting, high scoring opening quarter as both teams ran the floor looking for any early opportunity to expose the opposing team. Liffey’s took an early lead through some excellent play from both their Americans Boone and O’Connor.

However, Portlaoise dominated early inside on offense as Claire Melia accounted for the first four points of her teams tally. With Celtics now forced to concentrate their defensive efforts inside the key, the Panthers guards found themselves open outside the arc and the O’Sullivan sisters executed two three-pointers.

Despite an excellent opening quarter from the home side, Celtics still managed to go in two points up at the break.

The Panthers girls started the quarter excellently as they went on a scoring spree through some fantastic personal offensive efforts from Necole Sterling, who scored under severe pressure both inside and outside the arc.

Midway through the quarter the home side appeared in full control after establishing an eight point lead. However, this lead was short lived as Emma O’Connor managed to keep her team within touching distance displaying some accurate shooting from the field despite her height.

Portlaoise struggled on the offensive boards and handed the Celtics too many second chance scoring opportunities which they converted. At the halftime buzzer, Panthers had managed to turn the two point deficit into a two point lead.

The third quarter belonged to the Celtics as they switched from zone to an aggressive, in your face, man-to-man defence which disrupted the flow of the home side and struggling to penetrate, they were kept to only nine points in the entire quarter.

Aisling Hayden scored a crucial basket for the Panthers and Sinead Melia put in Trojan work on the defensive end. The Celtics capitalised on some sporadic, lose play from the Panthers girls, finishing well on the break which saw them up eight points at the end of the third.

Maeve Phelan stepped off the bench in the fourth to open the quarter with an excellent three pointer which rallied the home side and more importantly, brought the crowd to their feet encouraging a comeback from their team.

The O’Sullivan sisters accounted for six well taken points under the board. Claire Melia again exposed the Liffey’s weaknesses inside drawing some fouls and executing from the line. Bringing the game back to five points in the final two minutes.

With the game there for the taking, unfortunately the Portlaoise girls never seemed to be able to get closer than three points and Liffeys showed their experience by closing out the game and holding off any last efforts from the home team.

This was yet another close and disappointing home loss for the girls who will head to Cork next week to face an ever improving Brunell side in what is essentially a ‘must win’ game for the girls.