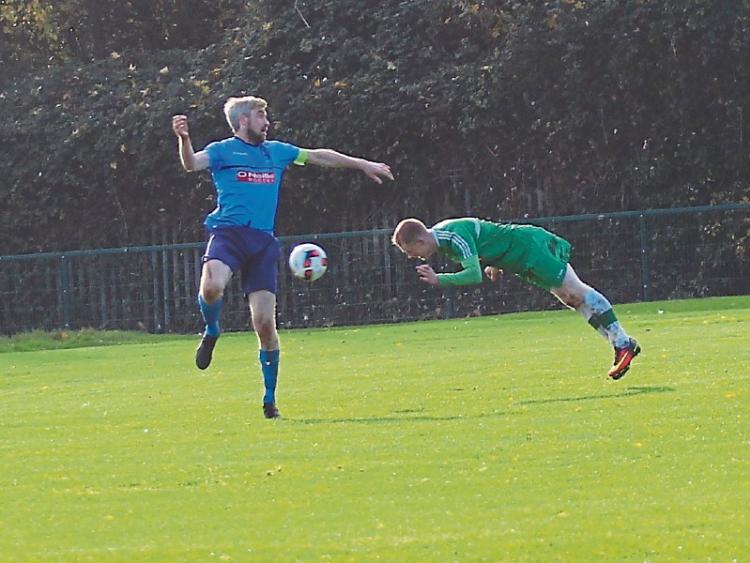 Portlaoise's Jason Murphy launches himself into a diving header.

Portlaoise AFC first team advanced to the second round of the prestigious LSL Metropolitan Cup with a penalty shoot-out win away to top Division side UCD.

In what turned out to be an enthralling game that went end to end, Portlaoise were more than a match for the side that are three divisions ahead and in fact should probably have had the game wrapped up before the dreaded penalty kicks.

The home side started brighter as Portlaoise understandably were cagy of the higher ranked opponents but they found their way after UCD took the lead on 14 minutes. Some good play opened up Portlaoise and Conor Canon’s shot went in off the unlucky Mark Brennan.

Portlaoise settled into the game and had a number of half chances before they finally equalised just before half time. Paul Cahillane and Shane Collins linked up well for a short corner and when the cross was cleared Eoghan White’s strike took a deflection and looped over the stranded Gavin Sheridan.

However straight from the kick off, UCD went ahead again. Declan Keaney passed to Canon who played in Kieran Bowers who lifted over Graham Brody for a superb goal for the home side.

Portlaoise continued to improve from there on and got level when a brilliant Cahillane free kick was headed home by Jody Dillon on 49 minutes but they were denied on three occasions by the brilliant Sheridan as he denied Cahillane, Jason Murphy and Dillon.

Graham Brody was called upon to make a stunning full length push over from a Belhout strike and UCD went close on two further occasions but were just off target each time.

The 30 minutes of extra time were dominated by Portlaoise as their fitness levels shone through, but UCD were thankful to Sheridan who made a stunning save from a Dillon strike then saved a Murphy penalty after an excellent counter attack had been brought to a halt by a foul on Murphy.

James Mullaney went close on two occasions and the excellent Shane Collins went close while at the other end Eoghan White was putting in a man of the match performance to keep UCD from getting a winner.

In the penalty shootout Cahillane, Dillon and James Dermody scored while Brody continued his heroics with two magnificent saves to send the visitors through to the second round.Portlaoise first team are idle next weekend as the hold a Race Night fundraiser in Manhattan Mixer on Saturday where all support is welcome.