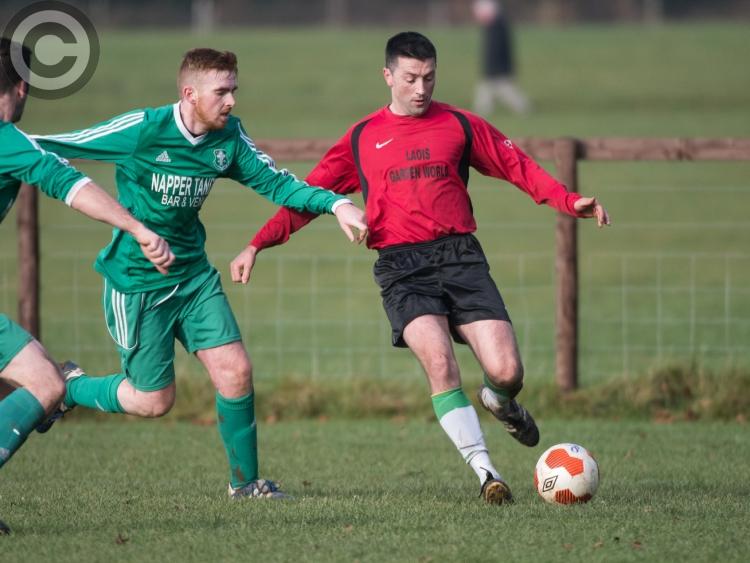 Stradbally Town will feel very hard done by to lose this game, but a blend of bad mistakes and shoddy finishing proved to be the undoing of the home side, as Portlaoise Shamrocks pounced late on for victory.

Stradbally Town got off to a glorious start with two early goals. The first goal of the game came from lackadaisical marking from Portlaoise Shamrocks, as they handed Stradbally Town the lead from a corner. Jake Byrne whipped a great ball in, and striker Derek O’Gorman had a simple finish after Podge Dunne deflected the ball into his path.

Portlaoise Shamrocks then went down the other end in search of an equaliser, but David Kelly’s shot made for a straightforward save for Wayne Comerford. Stradbally were well on top in these early stages, with Barry Linden forced into action from a Derek O’Gorman shot. Stradbally soon got their reward with a second goal.

A first-rate ball was sent into Jake Byrne's path from Sean Devoy, and Byrne took it past Barry Linden to finish coolly. Gearoid Parkinson went close for Shamrocks, blasting inches over the bar. Shamrocks then had another chance when a quality ball from David Kelly fell to Kevin Fitzpatrick, but Wayne Comerford was equal to the shot.

Stradbally nearly grabbed a third, but Ray Mullally saw his header cleared off the line. However, Shamrocks got back into the game with a goal from Brendan Lacumbre. All seemed to be going well for Stradbally, but a Justin Lalor slip allowed Kevin Fitzpatrick to go through on goal.

Comerford did well to save the first attempt, but was left helpless as Brendan LaCumbre tapped in the rebound. Justin Lalor nearly made up for his mistake, when he pulled off a superb long shot, but it flew just over the crossbar. Stradbally had a golden chance at goal when Podge Dunne played through Derek O’Gorman, but he fluffed his lines.

This miss would prove key, as Shamrock’s Colin Beale was played through on goal, and he composed himself to give Shamrocks a real boost before half time. It seemed that despite his goal, O’Gorman was having an off day, when he squandered another chance after the interval.

Podge Dunne had a glorious chance to put his side ahead, but Shamrocks keeper Barry Linden produced a good save. Comerford was again forced into action, after he pulled off another brilliant save from a Brendan Lacumbre effort. This was followed with another amazing Comerford save, as this time Mark Dooley forced the keeper into action.

Both sides looked like they were going to share the points, but Kevin Fitzpatrick had other ideas. Mark Dooley went past two Stradbally players and unleashed a powerful shot, but once again Comerford saved amazingly. However, the rebound fell to Kevin Fitzpatrick, who sent Shamrocks into ecstasy.