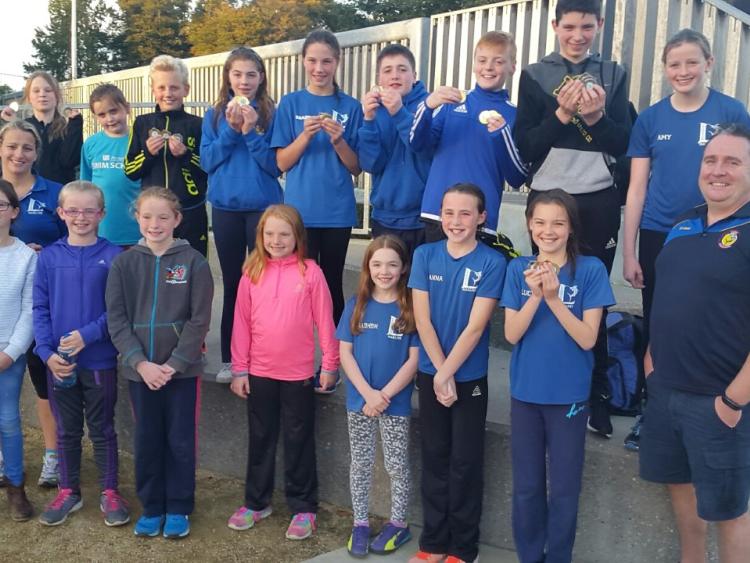 Laois Marlins swim club have been very busy at the start of their swimming season for 2016/2017. Since getting back into the swing of training sessions they have attended three galas to date.

This gala was attended by nineteen swimmers and consisted of swimmers in the age groups of U-8, 9-10 and 11-12. They covered sixty-six swims and between them accumulated 34 medals in total and were merited with eighteen gold medals, eleven silver and five bronze.

There was only one swimmer in the U-8 category, Riona Nugent, for the girls and to say this was Riona’s first gala, she finished an incredible 6th and 8th in her 50m Breast stroke and 50m Freestyle.
In the girls age 9 to 10 years events, there were seven swimmers. Lucy Brennan had great swims and medalled in every one of her races, 100m Free and 100m Breast, she won gold in both and a silver in the 50m back with an impressive personal best time (46.91).

In the girls age 11-12 events, Amy Bergin made two impressive personal best times in two of her events and 6th was her best place finishing. Anna Keane swam two events and finished in the top thirteen for her age group, this was good swimming by all the girls for the start of the season.

Shauna Dunne and Caoimhe Moore had an exceptional performance and both swam in five events, medalling in most of them with good personal best times. Shauna won two gold medals and three silver and Caoimhe won two gold and two bronze. Daniela Ryan competed in three events and shone in her butterfly. She achieved personal best times in all three events and won silver in the 100m fly and bronze in the 50m fly.

Fionn Cuddy was the only boy to represent the Marlins in the U-8s category, in his first gala, and he swam extremely well in his two events, 50m free and 50m breast stroke. He won gold and silver medals. Again, in the aged 9 to 10 category there was only one swimmer Conor McMahon who had a brilliant performance, winning gold in all of his seven events.

Gary won bronze in the 100m back and silver in the 50m fly with a personal best time. Noah Murphy competed in one event in the 50m freestyle and this was his very first gala, he too had a good swim.
Valerie Gildea, Laois Marlins swim coach quoted on the day, said “the future looks very bright for Laois Marlins with the youngsters coming through, with great inspiration from the older more experienced swimmers.”

Laois Marlins earned their first ever podium place at a senior provincial open event last weekend when Christopher Carew stepped up to take bronze in the 100m Breaststroke Finals, at the Leinster Short Course Championships.

This was an Open event, where swimmers, regardless of age, were seeded according to their times, which could result in a 12 year old competing against a 22 year old.

Understandably then the Qualification Times are difficult to achieve, and a total of six Laois Marlins earned the honour of representing their club at the prestigious provincial event.

The young Laois swimmers, the eldest of whom is 16, shared the NAC pool with top names in the swimming world such as collegiate swimmers Brendan Hyland, Ben Griffin and Andrew Meegan. All six swimmers achieved impressive personal bests and one swimmer qualified for finals on both afternoons.

The youngest Marlin Caoimhe Moore was very impressive at her Leinster Open. She recorded a massive three-second PB in 100m IM as well as a top thirty finish in 200m Breast.

Aideen Barry had strong swims in the 100m Fly and 100m IM and finished in the top twenty in the 50m Breast.

Head Coach, Padraic Dolan said. “This was an excellent short course championship and showed impressive swimming by our experienced Laois Marlins’ senior swimmers. A huge congratulations has to be given to Christopher on the day for swimming fantastically well.”

The Leinster Graded Gala took place in the National Aquatic Centre and Laois Marlins were represented by twenty-three swimmers from both the Junior and Senior Squads.

No medals are won at this gala but wrist bands are given to swimmers who achieve their next grade, many of our swimmers moved two or three grades on the day and all received bands.

There were brilliant PBs in the breast stroke events by Amy and Orlagh. Orlagh managed a phenomenal thirteen seconds PB and Amy a five seconds one. In the 50m Fly and 100m Fly, Lucy, Shauna, Caoimhe, Daniela and Valera achieved respectable PBs, Ryan, however, was very impressive with the 50m Fly joining Orlagh with a thirteen seconds PB.

We would like to welcome Eve and Leah Tarpey who have just joined the club and had brilliant swims for their first gala with the Marlins.

This gala was a great event for the Marlins club and was well represented by both the Junior and Senior swimmers.

Laois Marlins Swim club would like to say a big thank you to Kieran Hayes for his sponsorship of the pizzas for the swimmers on the information night. The swimmers said they loved them!