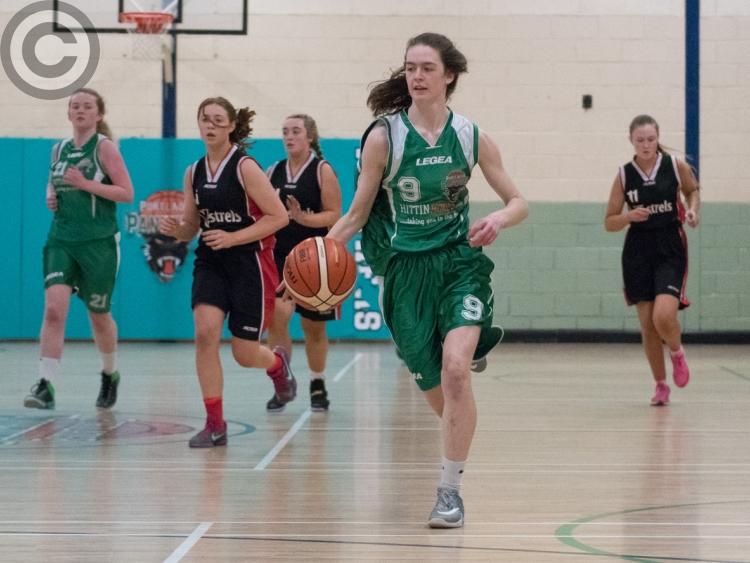 The U-16 girls took to the court last Saturday evening in defence of their midland league title.

Having suffered a surprising defeat early in the season every game is now crucial for the girls. Last weekend saw them play only their second home game of the season against local rivals, Kestrels.

The girls started the game well with the opening basket coming from a brilliant offensive rebound from Seona McGittrick. Amy and Ciara Byrne teamed up very well running the floor and creating scoring opertunities for each other.

Shauna Dooley hit a big three pointer half way through the quarter to counteract one from their opponents. Lauren Dwyer also started the game very strongly finishing a great fast break move.

Ellen Garvey and Jasmine Burke pulled rebounds on both ends of the floor off the bench and both quickly added to the teams tally. Sarah Fleming also picked up a basket from a forced turnover. Jade Burke showed some great post moves and created a super basket. However although the girls were scoring well their defence was not as strong as usual and they allowed their opponents to bring the deficit to just five points at half time.

The second half saw the intensity of the girls defence increase and thus their performance started to improve. The pace of the game was much quicker and the girls were playing more free flowing basketball. Rebecca Reddin scored a brilliant basket after running the full length of the floor and finishing with an easy layup. The girls remained ahead at the end of the quarter.

Grainne O’Reilly had a good second half getting great shots away and scoring from set pieces. Our two newest club members this year Aimee Collier and Isobel Donnery again took the game in their stride. Isobel’s quick thinking at the end of fast breaks has set up her teammates for many scores and Aimee’s never give up attitude has found her picking up strongly contested rebounds and 50/50 balls.

Their excellent second half performance saw the girls outscore their opponents by 23 points in the second half to secure a comfortable win keeping them in with an excellent chance of maintaining the league title.