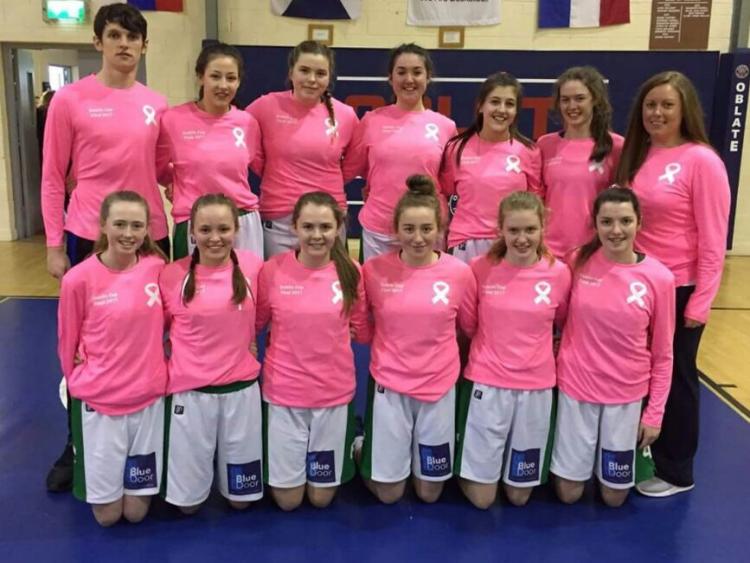 The Portlaoise Panthers U-15 girls team who claimed the Dublin Cup on Saturday as part of 'Pink Weekend', where teams wear pink to raise funds for Breast Cancer Ireland.

The U-15 girls were crowned Dublin Cup Champions on Saturday last when they defeated Kilcock Tigers in Oblate's Hallm Inchicore.

This was the annual Pink Weekend which raises funds for Breast Cancer Ireland. All finalists mark the occasion by wearing a bit of pink. It was a super weekend of basketball with some very closely contested finals.

The Panthers girls took to the court on Saturday in the final game of the day and they definitely did not disappoint. They lit up the place with their skill, pace and level of intensity. Every one of the girls gave 100%, and they were so determined from the start they they were not walking away without the title.

The girls put down the marker right from the start with a couple of quick baskets by Hannah Collins under the boards followed by a big three-pointer from Shauna Dooley. The pace and intensity from Portlaoise made it very hard for the Kilcock girls, who struggled to create any scoring chances and were forced into turnovers by Ciara Byrne and Gillian Wheeler whose pace and defence were too much for Kilcock to handle.

Jasmine Burke was brilliant under the boards at both ends of the floor picking up some great baskets from offensive rebounds.

Panthers' transition from defence to offence is second to none and something any team would love to be able to do. The Kilcock girls had been held to only four points in the first quarter and Portlaoise held a twelve point lead going into the second quarter.

The girls were as determined in the second quarter, Sarah Fleming picked up six consecutive points coming in from the bench, which helped to extend the girls lead. Grainne O’Reilly showed some great determination and experience beyond her years, especially on defence.

She also helped her teammates add to their tally with some brilliant assists. Ellen Garvey was very unlucky not to add to the girls tally, but she was solid on defence and made some crucial stops.

Kilcock were starting to find their feet and picked up six quick points without reply. Rebecca Reddin then hit an excellent long range shot to settle the girls again. Jade Burke was excellent both ends of the floor coming away with every 50/50 ball and was also very unlucky not to add to the Portlaoise score line. Panthers outscored their opponents 16-10 and made good half time reading with a score of 32-14.

With the momentum firmly with the Portlaoise girls, another good quarter should see them over the line. They needed to maintain their composure and continue playing right to the end.

Ciara Byrne and Gillian Wheeler again teamed up well at the start of the third quarter with Gillian turning the ball over and setting Ciara up for a fast break basket. Hannah Collins and Jasmine Burke accounted for another eight points between them in the first half of the quarter.

Shauna Dooley, when introduced back into the game, picked up some superb rebounds and powered out of defence to assist Gillian Wheeler for a brilliant basket. Kilcock were again finding the going tough at both ends of the floor but managed to add another six points, leaving the Panthers with a 44-20 lead heading into the final quarter.

The final quarter was a more evenly matched contest with both teams scoring 12 points. The highlight for the Panthers girls was the four points from Rebecca Reddin again finding perfect range and nailing two big outside shots.

Sarah Fleming also added another basket ably assisted by Jade Burke who is gaining more confidence with every game. Portlaoise finished with the last score of the game and took a deserving win on a final score line of 56-32.