The story of Mike Cleary - the Laois man who became an American Champion, but lost it all 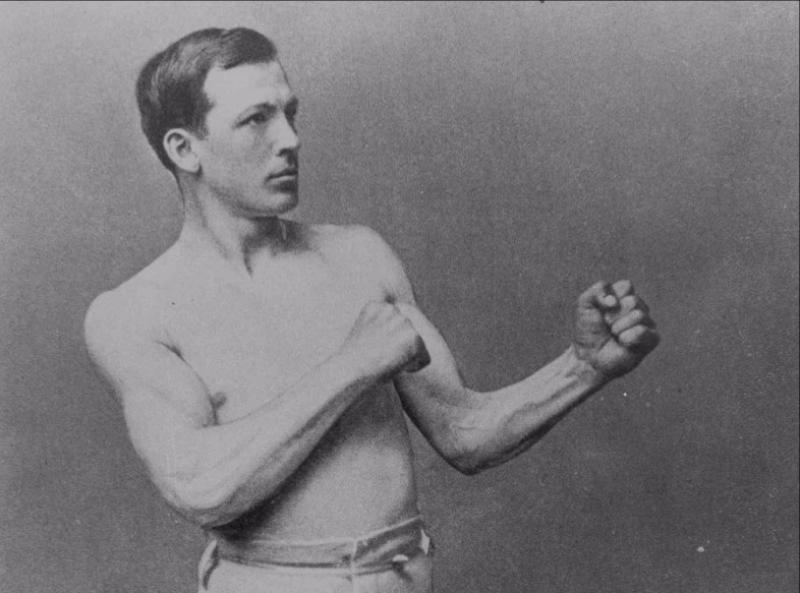 Not much is known about the background of 19th century prizefighter Michael 'Mike' Cleary, but what we do know is that he was born in county Laois on May 19th 1858.

As a young boy he went with his parents and siblings across the broad Atlantic to the land of opportunity. For the young Mike Cleary the streets of New York City became his avenue to prizefighting glory.

The Big Apple back in those days heaved with the influx of European migrants, and rival gangs soon emerged from these different nationalities flooding the city. Notoriously rough districts like Five Points, Hells Kitchen and The Bowery played host to these immigrants, and it was here the blood soaked sport of bare knuckle fighting thrived.

This was an era of New York gang culture where rivals would pit their best fists against each other, not just for bragging rights but also for a healthy purse, and young Mike Cleary from Laois rose through this culture.

Standing at 5' 8" and weighing in at 172lbs, Cleary was considered a scrappy Irish upstart and he began his career as a sparring partner for some of the bigger hitters of Manhattan, before he grabbed the attention of fight promoters who wanted to display him to the paying masses.

Cleary's first bout took place in 1874 against Jack Wilkes and it ended in a disapointing draw. His second bout would take place not long after and it resulted in a injury for the young Laois man.

Cleary took on Jack Langdon in New York and all was going well for the Irishman until he hit Langdon so hard on his temple that he broke his own wrist! Many thought Cleary had ended his own fighting career in only his second big time bout, but the Laois man harboured a strong stubborn streak and he did not let a simple broken wrist derail his dreams of the big time.

Within a few months Cleary was back in the ring once again to prove his doubters wrong.

From 1875 through to 1876, '77 and '78 Cleary knocked out every opponent that came his way. His good fortune in the ring transpired outside it when he invested in a saloon in Philadelphia, where his beloved elderly mother had relocated to from New York.

In March 1879 Cleary joined a group of Irish American pugilists for an exhibition bout in Scotland. Cleary's opponent was Jem Stewart who was to end Cleary's winning streak with a fourth round knock out in Glasgow.

This beating at the hands of the Scotsman failed to quench Cleary's thirst for glory and just three years later the Laois native became middleweight champion.

On October 18th 1882 Cleary took on American middleweight champion John Rookes for his title. Before the bout Rooke boasted he would put the Irishman to sleep before the fourth round, but he would regret such a boast when Cleary knocked Rooke to the canvas five times.

Before the end of the third round, Cleary had punched Rooke's lights out. When he woke moments later, Rooke would discover the Irish immigrant had become the new American middleweight champ!

Following his win, Cleary moved up to heavyweight and joined William Muldoon's training setup at a farm in upstate New York. Muldoon was the son of Irish immigrants and a former fighter himself. He turned his farm at Little Belfast into a training centre for pugilist's such as Cleary as well as other stars of the era like John L Sullivan and Jack Dempsey.

Cleary would fight the likes of Sullivan and Dempsey in the professional ring but he would also forge friendships with them as a sparring partner at Muldoon's farm.

Prizefighting had spread to the west coast and Cleary decided to spend some time there in the rings of San Francisco. He met and was defeated by 'Gentleman' Jim Corbett who would later state that Cleary was one of the hardest hitters he ever encountered in the ring.

But for the odd defeat he experienced in San Francisco there were the glorious knock outs and Cleary dished out three of them to unfortunate opponents.

One fight in San Francisco in 1885 ended on a sour note when police broke it up. Cleary was taking on British fighter Charlie Mitchell when both sets of supporters clashed. The intense atmosphere outside the ring infected those inside it and the fight between the Irishman and Englishman turned nasty. Before either of them could kill each other, police raided the scene and declared an end to the bout.

Cleary's career never hit the highs of his midldleweight title win after 1882 and as his bouts gradually declined, he took on a new role at Muldoon's farm as a trainer to a number of up and coming fighters.

In 1893 Cleary's fighting career truly came to an end when he suffered a horrific accident in his saloon in Philadelphia which resulted in the amputation of his foot. Cleary's mother had also died and he quickly descended into the depths of depressive drinking.

Muldoon ordered Cleary to come stay at his farm to recover but worse was to hit the young Laois man. By the time Cleary reached Muldoon's farm in upstate New York his health had deteriorated dramatically.

His once powerful sturdy frame was reduced to a paltry bag of bones, his chestnut hair had thinned and greyed while a waned colour washed his face. Cleary's body was racked by alcohol, the effects of an amputated foot and tuburcolosis and on September 5th 1893 he died at Muldoons farm at the age of 35.

Mike Cleary was buried not far from Muldoon's farm in Little Belfast, but was later reinterred next to his mother at the New Cathedral Cemetary in Philadelphia.

- Do you know exactly what part of Laois that Mike Cleary came from? If so, please get in touch, e-mail rory@leinsterexpress.ie or call the office on 0578621666.