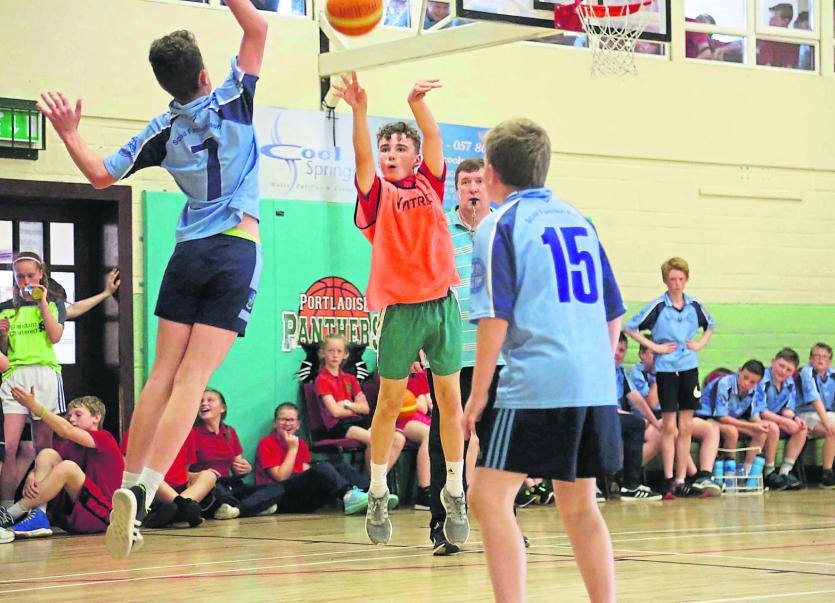 May sees the culmination of the Laois Sports Partnership basketball programme for primary schools.

St Mary’s Hall Portlaoise has been the venue for many a thrilling basketball match over the years, and the primary schools children who took part in the annual tournaments this May can be very proud to say they are now part of this great tradition!

May sees the culmination of the Laois Sports Partnership basketball programme for primary schools. Having grown from a series of one day blitzes, it is now one of our most keenly anticipated schools programmes each year.

Laois Sports Partnership has worked to promote participation in basketball by forging links between primary schools and local clubs. Over the last 6 years we have developed a programme where coaching sessions are delivered in schools by coaches from clubs in the county. S

eamus Dooley from Portlaoise Panthers Basketball Club has been volunteering with the programme for the last number of years. His coaching skills and passion for the sport have been a contributing factor in the popularity of the programme and growth in numbers taking part year on year.

Coaching is offered to the schools over a 4 week period to pupils from 3rd – 6th class. Pupils in 3rd class can potentially receive the coaching for up to 4 years before they move on to secondary school. A record 19 schools took part in our coaching programme this year. Once the coaching has been delivered, all of the schools in the county are invited to take part in our tournaments run over 6 days in St. Mary’s Hall Portlaoise.

The tournament days give schools an opportunity to play against each other and use their new skills, in a friendly, non-competitive environment. All schools from around the county are invited with over 1,000 children taking part over the two weeks.

Part of the appeal of our Basketball Programme is due to its inclusive nature. We deliver the coaching and tournaments in such a way that everyone gets to take part, not just the most proficient players who normally get picked for teams. Children get to represent their school and wear their school colours – in many cases for the first time.

They get to experience the atmosphere of a large scale sporting event, mixing with pupils from other schools around the county. The emphasis is on friendly competition, so no scores are displayed. Everyone receives a certificate for representing their schools. Our aim is to encourage participation and hopefully see children get involved with their local club.
This year also saw the growth of our primary schools league. Piloted in 2016 for schools in Portlaoise, we were delighted to welcome new teams this year. The league finals were held on Friday the 26th of May when schools competed over 3 divisions.

Teams from Gaelscoil Phortlaoise, Portlaoise Educate Together NS, Maryborough NS, Holy Family NS, Scoil Bhríde Knockmay, Scoil Bhríde Ballyroan and Presentation PS Portarlington competed to reach the finals. The games were fought fiercely and sportingly to the cheers of supporters from their schools.

The pupils from Holy Family NS just had the edge on their opponents this year and were eventual winners.

Congratulations to all the schools and their teachers who took part and made the league such a great competition again this year.