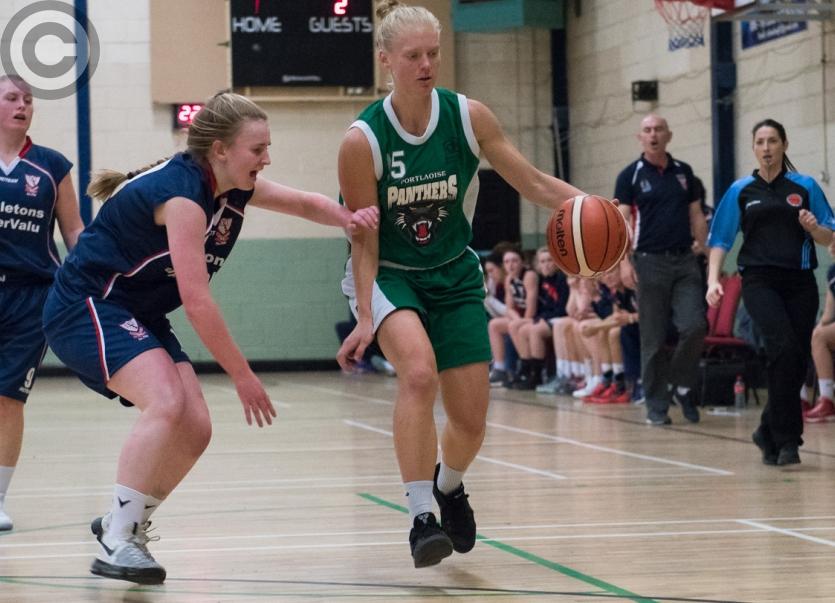 Portlaoise Panthers got their Super League campaign off to a dissapointing start in front of a packed St Mary’s Hall on Saturday night, as they suffered a defeat at the hands of Cork side Brunell.

Panthers have found themselves without U-18 Irish sensation, Claire Melia after she suffered an unfortunate season ending knee injury in a pre-season practise game. With Maeve O’Sullivan still recovering from the same injury, the Panthers have recruited some new faces and are also joined by two new American recruits, Stephanie Poland and Stephanie Schmid.

On her return to Super League basketball this season, Tracy Fallon drew first blood for the Panthers as she propelled them into an early lead, scoring the first five points for the home side. Brunell went small with their starting five in an attempt to spread the floor and pull out the Panthers post players.

They worked the ball well on offense, penetrating and dishing but failed to capitalise on some easy, early opportunities which let the home team off the hook. The Portlaoise defence seemed to come to terms with the Brunell offense nearing the end of the quarter and they made some excellent steals as Maeve Phelan deflected ball after ball away from the visiting team.

However, the Panthers set-offense was struggling as they failed on numerous occasions to execute that final pass and also struggled to convert, both inside and outside. Despite this, the teams could not be separated at the end of the first quarter after a low scoring and sloppy affair.

The second quarter belonged to Brunell as their missed opportunities in the opening quarter were now being converted and they established a lead which they would not relinquish for the entire game. They exposed gaps in the Panthers defense and capitalised on some lacklustre help defense.

Danielle O’Leary pulled the strings from the top of the key while their American, Breana Bey, caught fire and scored eight points on the trot. Portlaoise continued to work hard but frustrations were growing as they made some very uncharacteristic turnovers and missed some open shots.

Sharon Melia finished strong under the board and kept the scoreline ticking over for her team, while Stephanie Schmid showed her excellent range as she netted her first three pointer of the game. Mary Hulgraine then contributed with a fine two pointer and closed the gap but Brunell ran in some easy baskets at the end of the quarter and they lead by eight points at the break.

The home team knew they were not doing themselves justice on the court and were determined to reduce the deficit in the third quarter. Brunell pushed their lead to fourteen points in the first minute of the quarter before the change to zone defence by the home team took affect and propelled them into scoring eight unanswered points off some excellent forced turnovers.

The comeback was sphereheaded by American recruit Stephanie Schmid, who excecuted well off the dribble and from long range. Sinead Nihill also made a big impact off the bench as did Amy Dooley, who constantly hussled under the baord for offensive rebounds. Sinead Melia drove at O’Leary on numerous occasion and scored a fine lay-up under the board. Portlaoise went in four points down at the end of the quarter.

Much to their credit, the home team threw everything at the visitors in the final quarter but again, struggled to execute on the offensive end which is so uncharcteristic of this team. Steph Poland remained an inside threat as she had a distinct height advantage over her Brunell defenders.

The Cork side worked the ball well in the final quarter and moved the Portlaoise zone from side to side, exposing the gaps. They converted their three point opportunities excellently and Portlaoise just could not close the gap by any more than four points.

Coming out of the zone for the final two minutes, the Panthers implemented a full court press and threw everything at the visitors but alas, to no avail. Brunell ran out nine point winners and handed the Portlaoise side their first defeat of the season.