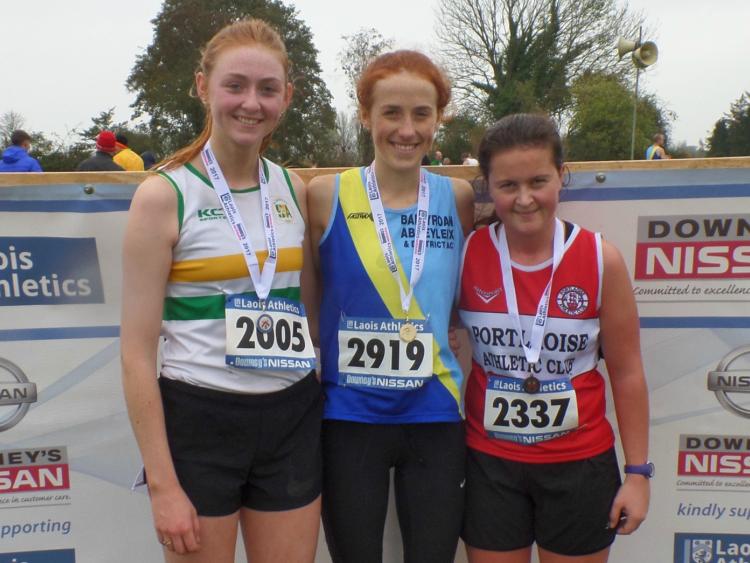 The top three in the U-19 race at Abbeyleix over the weekend.

All roads lead to Abbeyleix last Sunday for the second day of cross country racing in Laois, at the 2017 Downey’s Nissan/Laois Athletics Intermediate Championships.

As well as the Men's and Women's races, scheduled for the end of the day, there was a full program of juvenile championship racing for ages U-9 to U-19, giving all spectators a great day’s entertainment.

Hosted by Ballyroan Abbeyleix and District AC, the course was soft but not too heavy, despite the bout of wet weather during the previous week. When combined with the hilly terrain that is so characteristic of this part of the county, it meant all athletes were in for a tough, physical challenge. However, the true measure of an athlete is how they rise to master a challenge when it comes, and rise to it they certainly did.

Championship racing began with the under nine girls running a 600m course. What these young athletes might have been lacking in stature was certainly made up for with spirit and determination. Released from the line by Portlaoise AC’s Joe Walsh, acting as race starter for the day, the girls made their way to the first bend as though their lives depended on it.

The field was soon spread thin as St Abban's had taken the first four positions by the second turn and kept it that way to the finish line, with Cara English taking the gold. Portlaoise AC’s Daniel Downey then took the U-9 boys gold in the following race.

Ballyroan’s Faye McEvoy showed her usual dominance in the U-13 group, and was a clear winner ahead of St Michael’s teammates Kate Connelly and Poppy Hackett, who bravely fought one another for the silver. St Abban's Jack Fenlon never missed a beat in the boys U-13 race and led comfortably from start to finish.

His team mate Seoighe English had her work cut out for her however, in the U-15 girls race, with a very tight three way race for gold between Seoighe, Jill Gaughan of Ballyroan (2nd) and Meabh Gallagher of St Abbans (3rd).

The U-15 boys race was not without excitement either. Oughaval AC’s Oisin Jago led from the start, with Ronan Hyland of Rosenallis-Kilcavan tight on his heels for almost the entire race. With less than one lap to the finish the Rosenallis athlete upped his gears and moved into first, taking the gold medal at the finish line with Oisin having to accept silver. There was a tight scrap between team mates Evan Hogg and Colin Powders for the bronze medal too, with Evan winning out in the end.

The boys U-17 race saw the trio of TJ Burke of St Abban's, Curtis Lee of Mountmellick and Ryan Hogg of Ballyroan exchange first place several times over the course of their 4,500m race, and in the end it was the St Abban's man who took the gold.

The Intermediate Ladies race was run in conjunction with the U-19 girls, as they both cover the same 4,000m distance. There was a very convincing win by St Michael’s athlete Lisa Sweeney in the ladies race, and she was followed home by St Abban's team mates Mary Doyle and Sinead Kelly for second and third.All three ladies now move up from the Intermediate grade to Senior. St Abban's took the gold team medal with Portlaoise taking silver and Ballyroan taking the bronze.

Ballyroan athlete Sorcha Moloney also had a convincing win in the girls U-19 race, leading comfortably from the start and was never really put under pressure.

The heavens opened just as the men’s race was due to start, softening the ground enough to expose those who’s training regimes were not up to par. Colin Coyne and Pat Marshall led the field of 27 athletes to the first bend and beyond, with Pat slipping to 5th place by the second lap. St Abban's man Séan Geoghegan took on the race to Ballyfin’s David O'Mahoney by the end of lap two, with Colin Coyne in 3rd place.

Things had changed again by the fourth lap, with Ballyfin’s David O'Mahoney taking the lead to Séan Geoghegan and both athletes still looking strong. St Abbans Colin Coyne and Tom Dunne of Ballyroan, now fighting it out for the third place, it was anyone’s race still.

Séan Geoghegan took the lead again, with just over half a lap left, and crossed the line for gold as an Intermediate athlete for the last time. He was followed across the line by David O'Mahoney in silver and Colin Coyne for the bronze. St Abban's won the men’s gold team medal while Ballyroan Abbeyleix won silver and Ballyfin AC took the bronze.

The next event on the Laois Athletics calendar is the Downey’s Nissan/Laois Athletics Masters, Junior and Development Cross Country race, taking place in Emo Court on the 5th of November.