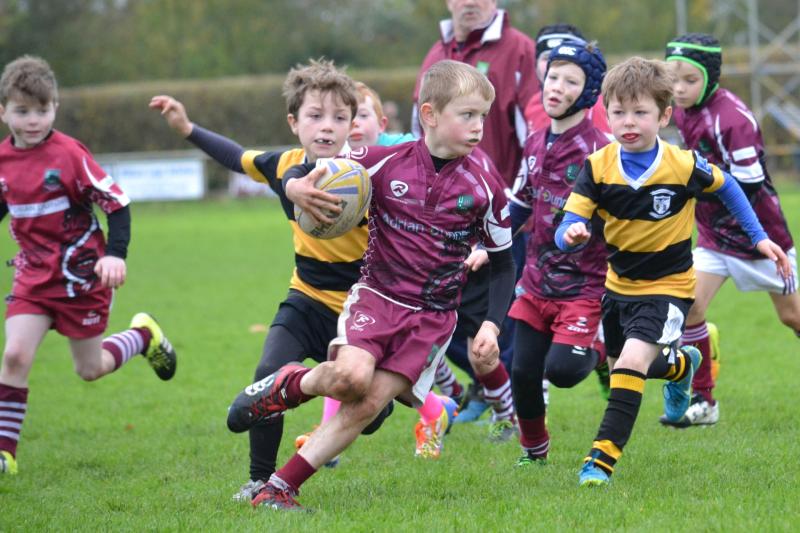 Sport should always be about inclusion and Portarlington RFC have made sure that this is their fundamental priority, as they aspire to make team sport accessible to everyone in their community.

The club’s minis section has been working hard to offer a positive team environment where boys and girls from Portarlington and surrounding areas can enjoy all of the benefits of sport and this was clear for all to see as they hosted Newbridge RFC in a blitz for seven to twelve year olds at Lea Road last Saturday.

The youngest recruits play Leprechaun Rugby which is a non contact version of the game and encourages the development of passing and handling ability as well as important communication and organisation skills. Coaches at this level work with five and six year old boys and girls to build a fundamental understanding of the game and so they don’t play games against other clubs but their training session took place surrounded by the atmosphere and excitement of the minis blitz.

The blitz consisted of a series of games being played between Port’s U-8s, U-9s, U-10s, U-11s and U-12s and their Newbridge counterparts. The games were played in a positive spirit with coaches from both clubs encouraging the players and assisting them with help and advice during games.

The day also involved an interesting innovation that saw some of Portarlington’s U-16s players getting involved by refereeing games. This move is seen as a progressive way to encourage youths players to develop their communications skills while developing a synergy between the club’s minis and youths sections.

Leinster Rugby plays an important role in the development of minis rugby in all clubs by offering coaching courses and workshops for volunteers. Port ensure that all of their minis receive the best of coaching by insisting that all coaches participate in Leinster’s coach development programme.

Leinster Rugby also contribute by sharing the cost of a Club Community Rugby Officer employed by Portarlington RFC. This has allowed them to appoint the highly experienced Pádraig Mahon to the role over the last few years. Mahon has high level coaching experience at club, schools and senior level and he also coaches a Leinster U-16s development squad.

This role sees him teaching tag rugby in local primary and secondary schools as part of their physical education programmes and he is also available to assist club coaches with the planning of their training sessions. Mahon has developed a reputation as being one of the most hard working and innovative CCROs in Leinster and he recently organised a hugely successful blitz for 5th and 6th class pupils from local schools which saw over 250 kids playing friendly games at the Portarlington club.

Saturday’s blitz showed exactly what underage sport should be about with all players getting equal game time while surrounded by a positive and encouraging atmosphere created by coaches and parents from both clubs.

This was matched by the warmth of the hospitality provided inside the clubhouse. The open fire, hot beverages and homemade treats on offer were welcomed by all who had enjoyed the matches in the cold conditions.

The rugby experience for families in Portarlington extends beyond the pitch though as they can participate in regular club trips to Leinster matches as well as family fun days and club parties. One of these parties was being organised last Saturday as players headed home to change into their costumes for a Halloween fancy dress event that was being run jointly with the neighbouring Arlington Soccer Club as both clubs look to work more closely together to encourage participation in sport in Portarlington.

Clearly Portarlington RFC are playing a leading role in increasing children’s involvement in sport within their community. Inclusion, cooperation and encouragement are the corner stones of their plan to continue to build participation numbers and surely this can only lead to further success.