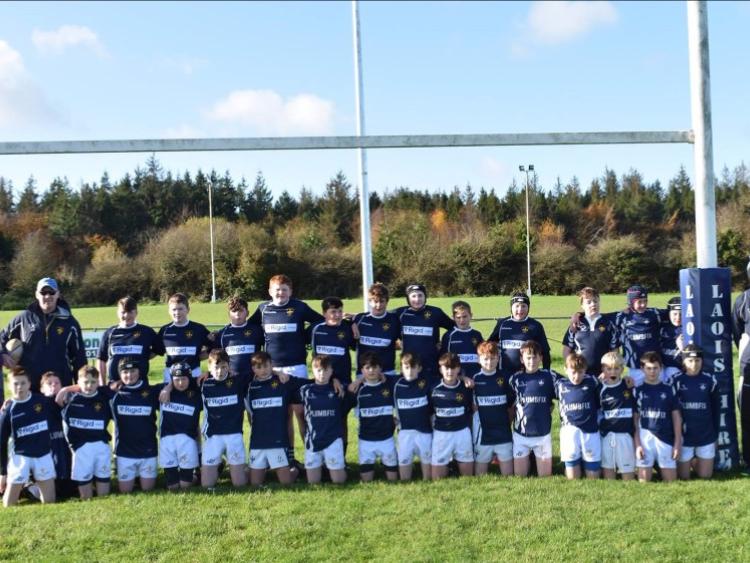 The Portlaoise U-13 team which defeated Naas at the weekend.

Halloween is just over but Portlaoise RFC U-13s showed a different type of spirit over the weekend, as when the chips were down, they ground out a very important victory.

A bit of hocus-pocus magic from Conor Raggett as well showed that this team is capable of anything at any given time.

Portlaoise started the match like every match, on top and playing with a strong wind, and it wasn't long before Sean Peters scored one of his tries. It was duly converted by Dylan Kelly and Portlaoise lead 7-0 with eight minutes gone.

Portlaoise spent the next ten minutes with all the possession but made no ground. Eventually they got the ball out to the wide channel and PJ Larkin was stopped just short of the line. Evan Bergin then picked up the ball and was helped over the line by Robert Lalor to touch down with 18 minutes gone. Portlaoise were now 12-0 up and in control.

After that, it was hard to tell if Portlaoise showed complacency or Naas stepped it up a bit, but Naas started to turn the screw.

First they were unlucky not to score as the Naas player had nothing to do but touch the ball down but it slipped out of his hand and was given as a knock-on. It was a great escape for Portlaoise but just before the half time whistle Naas punished Portlaoise for poor tackling and scored a deserved try under the posts, which was converted, to leave the half time score 12-7 in favour of the lads in navy.

Naas continued to put the pressure on and with 31 minutes gone they were awarded a scrum in midfield. The Naas Number 8 picked from the back of the scrum and ran half the pitch to score under the posts untouched. Something Portlaoise will have to keep an eye on in future and now they found themselves down 14-12.

The home support was in shock and they needed a response from the home team, which was exactly what they got. The young lads from Portlaoise showed great spirit to get back into this game. First a try from Sean Peters (his second) and a piece of magic from Conor Raggett, as he used all his rugby knowledge to drop kick a conversion with his left foot after the wind had blown the ball off the tee.

A further three points by Raggett meant Portlaoise started to stretch their lead with a penalty as Naas were coming offside. Another try from Sean Peters (his third) put the icing on the cake and Portlaoise ran out 27-14 winners.

Portlaoise used the bench well on the day with Jamie Baldwin, Paddy Reddin, Ruairi Brennan and Adrian Baldwin making a big impact and the panel is starting to show strength as well as depth. Another win for Portlaoise here, and now they will play Newbridge in the final. Date to be decided but next up is the Leinster Premier League.