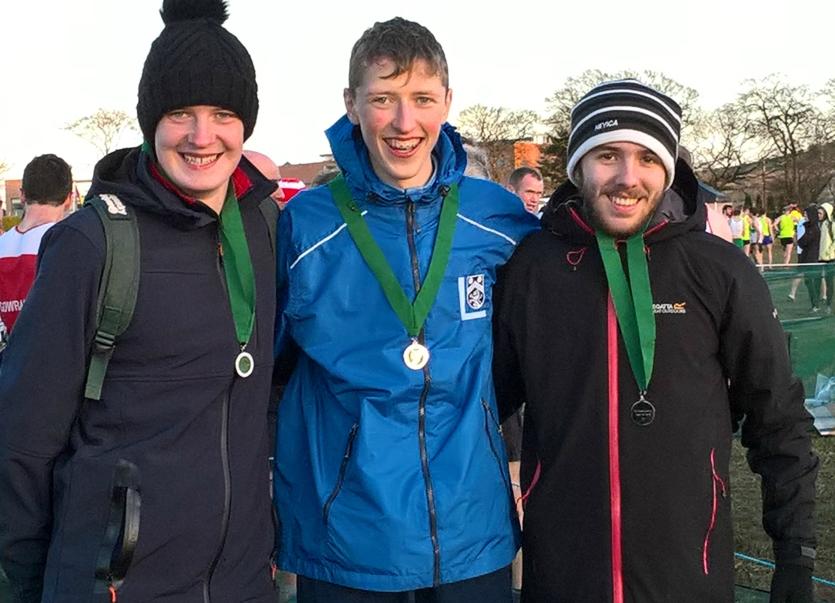 Adamstown in County Wexford was the destination for this year’s Leinster senior cross country championships, which meant that some of the finest athletes Laois has to offer were on the road last Sunday heading to the sunny south east venue.

It’s a location familiar to most athletes, after previously hosting the race three years ago. A well-organised and very well marshalled event greeted the hordes of athletes and parents from all over the province who descended on the little town once again.

A total of sixty eight men, women, boys and girls from across eight of the Laois clubs competed at the event, ranging in ages from U-11 to Adult. With some very strong competition at the event, we had some very notable finishers on the day. The first championship race was the U-19 girls.

Sorcha Malony of Ballyroan AC couldn’t have begun the day any better for the Laois contingent. Starting well, she took off in third place, allowing others to do the work up front and at times even looking like she was on another training run.

She held third place for almost the entire race until the last 800 meters when she effortlessly moved up into another gear that her competition simply didn’t have. She took the lead and sprinted across line to Leinster gold with the kind of style that we are all starting to expect every time she starts a race.

The boys U-19 race followed the girls, and Ballyroan AC were again the Laois club to beat. Cian McDonald ran with the lead group for the full 6,000m race and was never outside the top eight. After the first 4½ Kilometres Cian started to make his way through the field, eventually finishing up in fourth place and earning himself a Leinster medal and a place in the National finals in two weeks’ time on the Leinster team. There was also a gold county team medal won by the U-19 boys’ team of Cian McDonald, Adam Holden, Colin Grennan & Sean Sheridan.

Not content with two medallists after only two races, Ballyroan AC athlete Faye McEvoy was out to prove herself in the girls U-13 race, and prove herself she did. Following her older team mate before her, she crossed the line in a very convincing fourth place and won the third medal of the day for the Ballyroan club.

In the U-13 boys race it was the familiar face of St Abban's youngster Jack Fenlon who kept Laois in the medals. Always a strong athlete and well used to the podium, Jack finished up in fourth place, earning himself a place in the upcoming National finals. The final Laois juvenile medal of the day went to the ever-improving Cathal Connaughton of Oughaval AC.

Cathal has been on something of an upward trajectory of late, and adding another Leinster medal to his mantelpiece will no doubt boost this young man’s confidence as he heads into National Cross Country season. Cathal finished his 5,000m race in 11th place overall and took the second last seat on the U-17 boys Leinster team for the National championships.

As the day drew on, the ladies senior race kicked off with fifty two runners including only five from Laois. The clear favourite from the Laois clubs was Portlaoise’s Mary Mulhare, and she didn’t disappoint. Almost from the gun it became a two horse race between the Portlaoise native and Una Britton of Kilcoole AC for the win.

Racing over 5,000 meters, the two former international athletes were in a class of their own. As the laps progressed, the Kilcoole athlete edged out a lead over Mulhare that became too much to reel in towards the end. Across the finish line, it was a very impressive second place for the Portlaoise lady who was happy to take the silver medal.

The men were next up, as were the numbers competing from the Laois clubs. Of a total of eighty seven runners, there were thirteen competing from Laois, with the first six across the line scoring points for their county. Colin Maher of Ballyfin AC was our frontrunner for the county, and was never out of the top six.

The formidable Thomas Hayes of Kilkenny AC took the lead from the start, and held it for the entire race, with the small exception of his taking a wrong turn at the end of the first lap and running wide as he rounded the starting line to begin his second lap. In true sporting fashion, it was his competitors who called him back into line, and he summarily sprinted back into first place taking the lead from the Laois athlete again.

After a gruelling 10,000 meters over seven laps, Colin Maher crossed the line in fifth place, outside the medals but still a position to be proud of, and helping the Laois men’s team to a very respectable third place.

Ava O'Connor, a Mountmellick athlete who runs for Tullamore Harriers, also had great potential coming into the cross country finals on Sunday, and she passed the acid test in Wexford as she won gold in the U-15 3.5k.

There was a fast pace right from the start and Ava went with the early leader Hannah Kehoe of Kilkenny and they quickly gapped the chasing field. After the first mile young Kehoe had a slight lead on Ava and over the next mile stretched her lead to 30 metres or so. However with 300 metres to go Ava surged and quickly caught up on the leader and went on to be clear winner. Ava adds this club Leinster title to a schools Leinster cross country title and track 800m victory that she had earlier in the year.

Notable Athletes of the Day