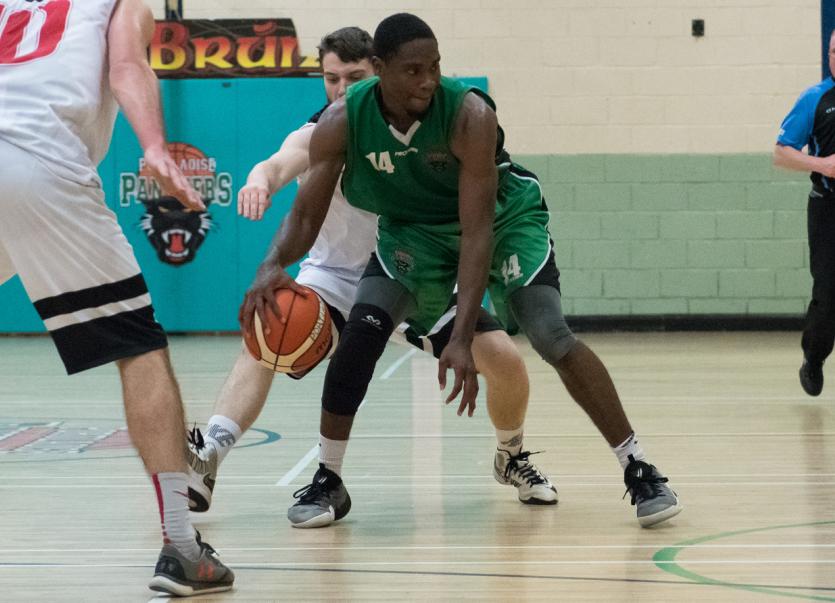 Portlaoise Panthers National League men’s team set out early on Sunday with a big road trip to Derry to take on LYIT in what was always going to be a tough test of the bodies against a young, athletic side.

The Panthers men held their nerve down the stretch to record a massive win following a sluggish start in Bishop’s Field gym. A big second quarter was to be the catalyst where they overturned a fourteen point deficit and played some great team basketball to take victory.

The home crowd were treated to an exhibition of outside shooting from the home team in the first quarter as LYIT went off on one hitting eight three pointers in the first period. American Chaz Watler continued to reign supreme hitting two threes which were quickly matched by his team mate Jon McGill.

Dillon Muldoon got in on the act as he added another before adding a further score inside. Portlaoise Panthers looked to their imports with Tim Stewart and Mantas Vilimas using their big presences to cause problems under the boards.

It would’ve been easy for Portlaoise to lose themselves in this early onslaught but after travelling such a long distance they were not about to lay down and take a big beating. They managed to get to the end of the quarter with a fourteen point deficit but knowing they court hurt the home side inside.

The break allowed Portlaoise to regroup and they came out intent of shutting out the outside game as much as possible as they limited LYIT to just one three pointer in the second quarter. Panthers got into their stride as Peter Duignan and Tim Stewart went to work down low.

Vilimas was again to the fore in this quarter and Portlaoise quickly began to eat into the home side’s big lead. Benny Carroll was back in the side for only the second game this year and quickly found his range while adding more speed to the offence.

Gediminas Sevelis was his usual controlled self as the visitors continued to pile on the pressure eventually taking the lead right on the buzzer as Sevelis assisted Stewart on the break who dunked Panthers into a one point half time lead.

The third quarter was another big performance for the Panthers men as they continued to boss the game on the defensive end while picking off scores at will notching up another impressive tally of twenty four points in the quarter.

Again it was a team effort throughout the period but heavy scoring continued by both Vilimas and Stewart. Peter Duignan was having his best game of the season chipping in with his first double digit haul of the campaign. Dylan Dunne and Jack Dooley were pulling out all the stops on defence which allowed Panthers build up a ten point lead heading into the final quarter.

Nerves and tiredness showed on the faces of the Portlaoise contingent in the final ten minutes and LYIT took full advantage of this as the momentum began to swing back in their favour early in the final quarter.

The reintroduction of Walter to the game gave the home crowd something to shout about as he managed to bring his side to within two points with just under two minutes to play. But Portlaoise have many leaders in their ranks and both Stewart and Vilimas were doing just that as they pushed their team onto an eight point victory off a combined sixty four points between them, Stewart with 37 points and Vilimas with 27.

This was a massive win on the road for the team as they face into a number of tough outings starting next Saturday against Galway Titans which forms part of a double header in St.Marys hall when NUIG Mystics also come to town to take on Portlaoise Panthers in the Womens Superleague.