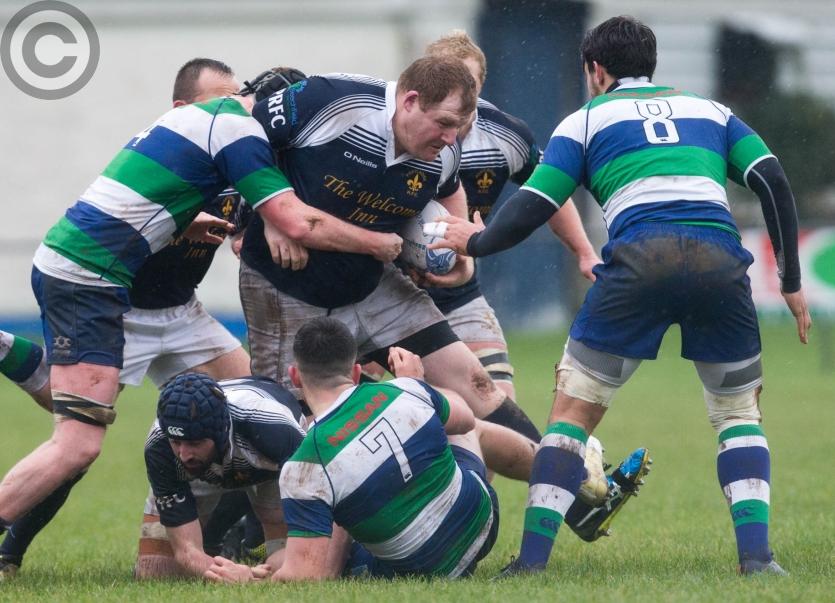 Will Sherlock on the charge for Portlaoise against Suttonians.

While Portlaoise remain second from bottom of Division 1B, they managed to gain ground on the teams aboved them after they defeated Suttonians with their first victory of the campaign.

It took just five minutes for the home side to go in for the first try, as the dreadful conditions seemed to suit Portlaoise more than their opponents. Portlaoise retained possession about twenty yards out from Suttonians try line.

They worked the ball well out to the left channel, where the lightning quick Jack Murphy was not TO be caught, and Portlaoise got off to the perfect start. Logan Nicholson placed over the conversion, as Portlaoise went 7-0 up.

Portlaoise’s line-outs were much improved from previous encounters, as they turned over Suttonians several times in the first half. There was a five to ten minute spell where Suttonians dominated possession. They came dangerously close to Portlaoise’s try line, but Portlaoise defended defiantly and fairly to keep them out.

Suttonians failed to make anything happen in that spell, and it wasn’t long until Portlaoise grabbed their second try of the half.

Andrew Collier and Kevin Griffin were both involved in the build up, and the ball once again found Jack Murphy’s hands, who was proving to be a threat Suttonians couldn’t handle, and he went over for a try again. It was an identical story to the first try, as Logan Nicholson slotted over the conversion. The referee blew the whistle for half-time, and Portlaoise were 14-0 up.

They were playing well, but needed another strong half to ensure victory. And they delivered, as a single try ensured them of the win.

The try came ten minutes into the second half. Nicholson played a delicate chip ball into the corner, which Kevin Griffin got his hands on to, but couldn’t control. However, the onrushing John Scully managed to grab the try in the end. Nicholson ended the game with a 100% conversion rate, as he placed over his third.

Portlaoise tried hard at the end for a fourth try, but the referee adjudged William Sherlock’s attempt to go over to be a foul, and the hosts had to settle with just the three.