RUGBY - Portlaoise U-13s edged out by Tullamore in Leinster League 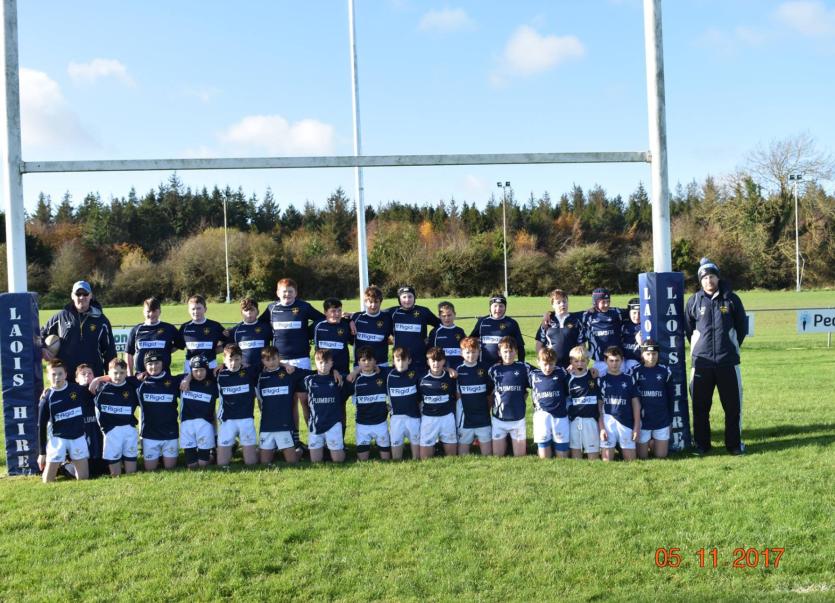 The Portlaoise RFC U-13 team.

There was never much between these teams over the years and today proved no different as Tullamore sneaked it at the end and ran out five point winners with a late, late try.

After a delayed start to this game in the cold, it didn't take Tullamore too long to settle in to this game as they controlled the first five minutes. In the sixth minute Tullamore's outside-centre demonstrated what he was going to do for the whole game. He cut through the centre but was unbelievably stopped by PJ Larkin, who prevented a certain try.

Unfortunately it came at a price as PJ got injured and had to sit out the rest of the match. In the 15th minute Tullamore got the break through they deserved and added the extras to go 7-0 up.

Again, as always when Portlaoise go behind they up their game, and they owned the ball for the rest of the half. Great drive by Jamie Baldwin and Conor Ging nearly got in at the corner, more pressure by the forwards and surely the Tullamore defence would crack, and crack they did.

Aaron Foley broke the gain line and was just stopped at the line, and presented the ball back well and Jake Darcy picked the ball and used the rule book to good effect, as he touched the ball down against the root of the goalpost pads and the ref had no option to award the try. Conor Raggett converted and we were all square at 7-7 all at the half time whistle.

The half-time chat was short as the cold was beginning to bite and both players and supporters were looking forward to an intriguing second half. The supporters didn't have to wait long as Tullamore scored a mirror image of their first try and went in under the posts again, and an easy two points added to make it 14-7.

Could Portlaoise respond again with 20 minutes of the second half gone and legs were getting tired? Again Portlaoise pushed and pushed and the Tullamore defence was fantastic, but Jarlath Taylor wasn't to be stopped and touched down just over the white wash to add five more points to the boys in navy. Conor Raggett had a tough conversion and pressure was on to level it, and that he did and with time nearly up the match was now 14-14.

Both teams and management would have been happy with the draw but Portlaoise seem to panic as they went for the win. With panic comes mistakes, and from a set piece Tullamore pulled the same trick from the sleeve and scored another try with their quick hands and speedy back row.

Their back row depth and width was fantastic and Portlaoise had no answer and Tullamore touched down with ease in the corner. Was there time to respond for Portlaoise? Not this time as Tullamore kicked the ball out of play.

In truth Tullamore were the more slicker team and won the breakdown battle with ease and deserved the win. Portlaoise will have to start playing the 50 minutes as if they were losing and drive it home. Time for Portlaoise to reflect and prepare for a very important game against Newbridge in two weeks time.