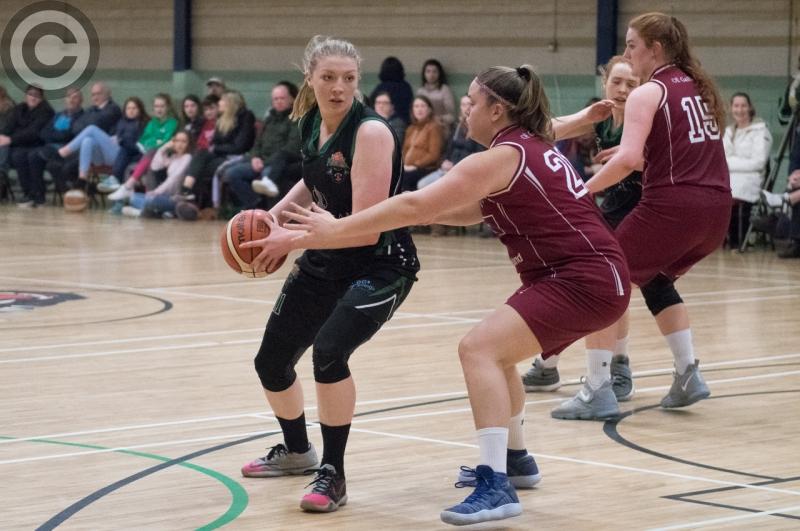 Sinead Nihill in action for the Panthers against NUIG Mystics. Pic: Denis Byrne.

Portlaoise Panthers secured their second win of the season on Saturday night against NUIG Mystics, who remain winless.

This was an extremely important game for both teams as a win for the visitors would’ve drawn them level on points with Panthers, who now have some breathing room moving into seventh position in the Superleague. The game formed part of a double header which saw both teams triumph over Galway opposition.

Mystics welcomed a new American in Jade Johnson who had only arrived the previous day but looked to make an immediate impact on the league. Her team mates got off to a bright start with Aine McDonagh in fine shooting form as she score six of their first eight points. Deja Bullock and Dayna Finn added on scores to extend the visitors lead.

Stephanie Schmid began to find her range midway through the quarter as she found herself open off the inbounds to score five points. She quickly added another five points to bring her tally to ten points in the first quarter but Mystics were still ahead by five going into the second quarter.

The Portlaoise coach wouldn’t have been happy with the defensive display in the first quarter and this must’ve been a priority for the team to rectify as they dominated at this end keeping Mytics to just eight points in the second quarter.

Portlaoise also continued to punish the Mytics defence as Schmid and Maeve Phelan got out on the break to close the gap to two points early in the quarter. Another three pointer by Schmid gave Portlaoise the lead that they wouldn’t relinquish for the remainder of the game.

Amy Dooley and Stephanie Poland linked up well inside on offence scoring the next two scores and the introduction of Deirdre Tomlinson added a bit of energy to the attack. Two further three pointers by Schmid brought her first half personal tally to twenty one points and gave Portlaoise an eight point lead at the break.

Portlaoise knew the importance of maintaining their intensity levels both ends of the court and they were excellent again in defence keeping Mystics under ten points for the second quarter running. Maeve Phelan continued to control the offence while dominating her opponents in defence.

The determination was evident throughout as Sharon Melia, Tracey Fallon and Sinead Nihill all put in some excellent stops to drive their team on. The two Stephanies put further scores on the board and a big three followed by a great drive by Sinead Melia put the lead out to twenty points by the end of the third.

Portlaoise were winning the major battles on the court and great team defence was the catalyst to extending the lead.

The fourth quarter saw both sides go basket for basket and there was an air of resignation on the faces of the Mystics players. A mid range shot from Sharon Melia and a three pointer by Maeve Phelan kept Portlaoise out of touch but Maggie Byrne finished the game well for Mystics hitting six points late in the game.

Deirdre Tomlinson, Erone Fitzpatrick and Amy Dooley rounded off the scoring for Portlaoise with two points each and gives the Panthers ladies a welcomed boost ahead of their National Cup quarter final next weekend against either I.T. Carlow or NUIG Mystics who play this Thursday night.