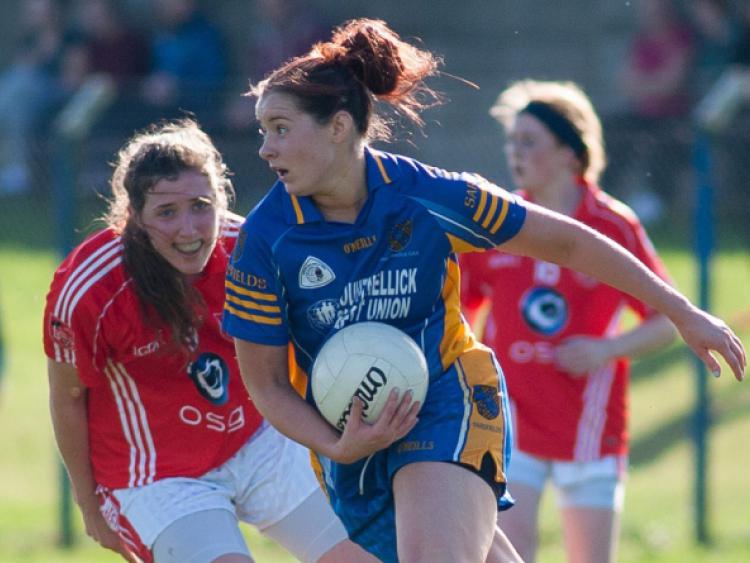 Mags McEvoy in action for Sarsfields.

Laois and Sarsfields footballer Mags McEvoy had a contrasting year, suffering relegation with Laois but starring for Sarsfields as they secured an incredible fifth Laois SFC title in a row, earning herself the Laois Player of the Year award in the process.

- Definitely has to be winning another senior county title with my club Sarsfields. Completing a 5 in a row is a phenomenal achievement for the club and one that means a lot to me and my family.

- No definitely not, this year I was lucky enough to be selected on the Laois panel and after a good start to the Division 2 League we seemed to lose our way and had a very disappointing Championship campaign, resulting in Laois being relegated to the Intermediate championship for 2018. Also club wise we didn’t achieve a lot of goals we set out for 2018 getting knocked out in the first round of the Leinster championship.

- My inter county campaign this year was disapointing but my biggest disappointment was our loss to Foxrock-Cabinteely in the Leinster club Championship. There was a point in that game where it could of went either way with about 10 minutes to go and unfortunately they got a bit of luck with a goal and gained confidence from that and just kept possession. They ultimately went on to demolish every team in the Leinster championship and retain the Bill Daly cup.

- Noelle Healy. Dublin were definitely on a different level this year. I’ve marked Noelle a few times but this year she has come into her own, a very experienced and intelligent player and reads the game extremely well so I found her very unpredictable. Although Tracey Lawlor still continues to be a tough opponent at Sarsfields trainings these days.

- For me it has to be the Ladies All Ireland Finals in Croke Park. 46,000 people... To be part of the biggest crowd to attend a female sporting event in Europe was an amazing achievement for the sport and it continues to grow which is only what it deserves.

- Anyone who knows me knows that I’m a huge UFC/Boxing & McGregor fan so without doubt if I could of I would of flew out to Vegas to the McGregor-Mayweather fight.

- I work and live in Dublin so I was travelling up and down for county and club trainings 3/4 times a week and then staying down at weekends so without the support of my Mam and Dad not just this year but every year for putting up with me at the weekends I wouldn’t have that drive to keep going. They are passionate GAA people and to see them as happy as I was when we won our 5th county title this year in a row makes it all worth while.

- This year myself and my best friend Clare had been planning it for a while but eventually took three weeks and travelled the west coast of America. Driving from Las Vegas to San Fransico. But my highlight hands down has to be visiting and seeing the beautiful Yosemite National Park. Being from Rosenallis I am lucky enough to live two minutes from Glenbarrow so I adore the forest & waterfalls and seeing Yosemite in the flesh was a memory I won’t ever forget.

- My goals for 2018 are firstly, to have a good league campaign with Laois but ultimately to be in Croke Park come September and to get back up to Senior status where Laois Ladies belongs. Secondly, My main goal for Sarsfields is to retain the Lulu Carroll cup and to give the Leinster & All Ireland competition one hell of a go. There’s so much talent in Laois that it’s about time Laois clubs are up there competing with the best in Ireland.

- My Biggest Fear for 2018 is to not be able to give 100% to football. My job requires a lot of tight deadlines and to make trainings for 7.30 midweek from Dublin you need to be on the road by 5.30 and some days in work you just can’t get out in time!

- I would love to see Katie Taylor retain her belt and go on to unify the lightweight division in 2018. She is one of Irelands biggest, if not the best, female athlete and a fantastic ambassador for female sportspeople in Ireland.

- I have an interest in nearly every sport but a dream of mine is to some day attend The Super Bowl. It’s on my bucket list, some day. But something a bit more realistic maybe.... I really hope that Katie Taylor gets a homecoming defense title fight in Ireland in 2018 and I will the first to get my ticket.

- Ciara Hughes is definitely one to watch for 2018. She’s a very talented young lady footballer and I’m excited to see her develop. We have some really talented young women playing football in Laois in our juvenile and minor set ups we just need to keep them playing.

- Argentina, but I’ll be supporting Iceland

- Hurling - Waterford. They are not too far off, they have youth on their side aswel and I lived there for 4 years so I’ve a soft spot for them.

- Football - Dublin. Dublin are on a different level and continue to bring in new players every year to boost the already high quality panel.

- I’m obviously going to go with my own club and say Sarsfields to retain.

- I think O’Moores with learn a lot from last year and win the Camogie.