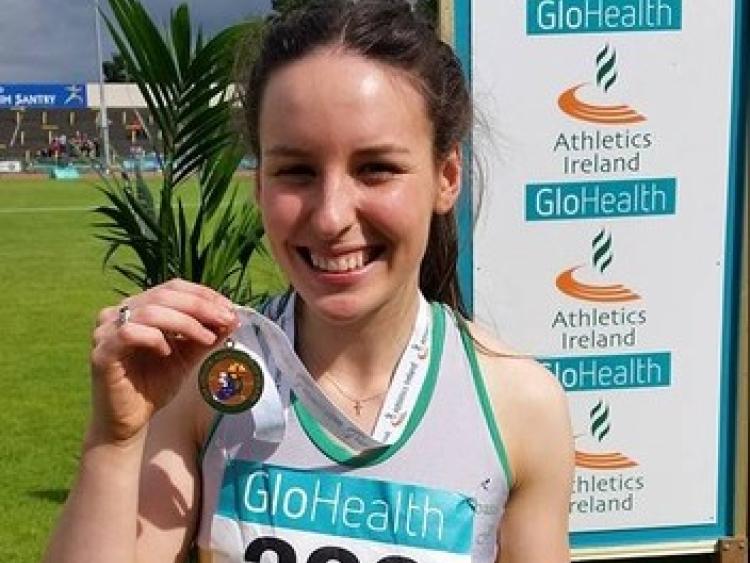 Saragh Buggy had a really busy 2017, winning national Triple Jump and Long Jump titles, starring for St Abban's in their historic Premier League winning team, and also graduating with a degree in Primary Teaching from St Patrick's College in Drumcondra.

- Without a doubt, my personal highlight of 2017 was being part of the St. Abbans A.C. women’s team who won the National League Premier Division competition. For this competition all members took part to earn points for the team, so it was a real team effort! This was a huge achievement for our small rural club, given that we were competing against large city clubs, as well as county teams. Our success brought a tear to a few ‘old timers’ eyes!

- No I didn’t achieve all that I wanted to in 2017. My ambition for the year was to qualify for the World University Championships which took place in Taipei. The qualifying standard for this competition in the Triple Jump was 13 meters 35 centimeters. I just came off short, my best jump of 2017 being 13 meters 21 centimeters. Even though I was disappointed not to qualify for this competition, the World University Championships took place the same weekend as the National League Final. Had I qualified for this competition I would have missed this unforgettable day for our club. It’s funny how things work out sometimes!

- My biggest disappointment of 2017 was not qualifying for the World University Championships. In 2016 I jumped a personal best of 13 meters 25 centimeters, so the standard to compete at the World Universities 2017 (13m 35cm) seemed very achievable. Unfortunately it wasn’t meant to be, but as I said above, positives have been taken and I have definitely learned a lot going forward.

- The toughest opponent I faced in 2017 was definitely Portugal’s Patricia Mamona. At the European Team Championships in Vaasa, Finland last June, I competed against Mamona in the Triple Jump. Mamona is the current European outdoor champion, with a personal best of 14 meters 65 centimeters. It was truly a great experience to compete against this fantastic athlete.

- The best sporting event I attended in 2017 was the European Team Championships in Vaasa, Finland last June. I travelled to this event with the Irish Senior Athletics Team and represented Ireland in the Triple Jump. Similar to the National League competition I talked about above, this competition is all about team work. Each member competes in an event and then scores points for the team. I came sixth out of twelve competing countries. It was a wonderful experience and it is always a privilege to represent Ireland.

- I wish I could have attended the World Athletics Championships in London last August. I watched the championships every day on the television. The best athletes in the world compete on this stage and the atmosphere created at the event was incredible.

- My coach Michael Kelly definitely played the biggest role in helping me to be successful in 2017. I have been training with Michael since the age of thirteen and currently train six days a week. He is always calm and encouraging and offers the best advice. I have always loved training with him. I am extremely thankful for having Michael over the years. I definitely would not have achieved the same success without him.

- My non-sporting highlight of 2017 was graduating from St. Patrick’s College, Drumcondra with a degree in Primary School Teaching. Although I really enjoyed my four years in college, I am excited to see what the coming years hold for me both in and outside of athletics.

- My number one goal for 2018 is to co-captain a strong team to the European Club League in Finland next May. After winning the National League Premier Division last August, St. Abban’s A.C. women’s team have the pleasure of representing Ireland in the European clubs competition, which takes place in Finland. This is a huge achievement for our rural club and I know that all team members, coaches, parents and supporters are extremely excited about the trip!

- My biggest fear for 2018 would be getting injured, but this is an ongoing risk for all high-performance athletes. There is a fine line between peak fitness and over-training. I myself have been side-lined in the past and unable to compete due to injury, this is not an enjoyable aspect of the sport.

- I would love to see my brother, Eoghan be successful in 2018. Eoghan competes in the 400 meters and had a very successful season last year. I would love to see him carry this form into 2018. Eoghan’s training is based in Dublin but when he does train at home I always learn new drills/techniques/etc. that hugely benefit my own training. I am very excited to see what Eoghan runs next year.

- The sporting event that I would most like to attend in 2018 is the European Outdoor Athletics Championships which will be held in Berlin, Germany in August of next year. This is always an exciting championship that features many Irish athletes battling against the best in Europe.

- Definitely sixteen-year-old Ruby Millet. I train with this girl and as well as being the best training partner, she really is a rising star. Ruby just recently competed in her first European Youth Championship where she represented Ireland in the long jump. I have no doubt that this is only the beginning for her.