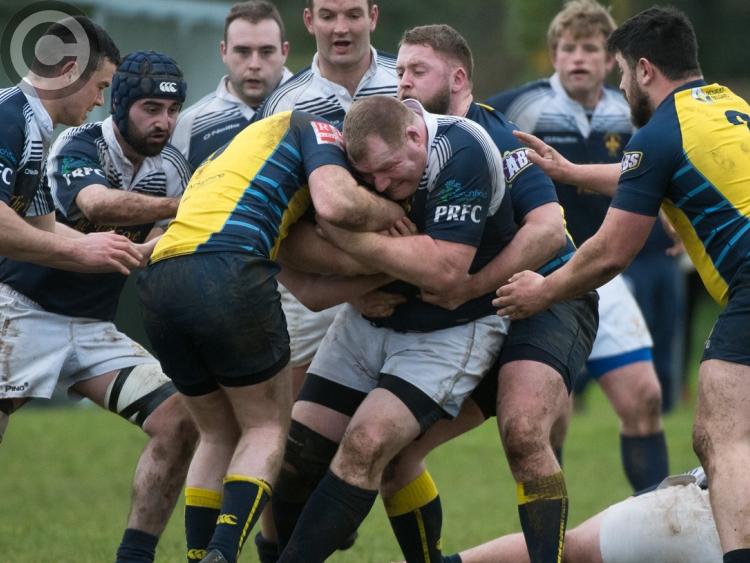 Will Sherlock hangs on to possession for Portlaoise against Clondalkin on Sunday. Pic: Denis Byrne.

Portlaoise recorded a much-needed victory in Leinster League Division 1B, as they had nine points to spare over Clondalkin on Sunday afternoon.

This was a fine win for Portlaoise, in what was a critical match for both teams. All credit must go to the players and coaching staff who did not get the rub of the green throughout the earlier games in the league, but stuck with the system which came up trumps on Sunday.

It was important that they got a bonus winning point, but not only that, they denied Clondalkin a losing bonus point as well.

In the opening ten minutes Marcus Madden scored two tries, the first when he finished off a fine forward drive, and the second when he intercepted a pass and raced over to make the score 12-0.

Clondalkin responded with two tries of their own, again with one converted. Approaching half-time, both sides scored penalties to leave the match evenly balanced at 15-15.

The second half started well for the home team with Robin Foot scoring a try which was not converted, making the score 20-15 for Portlaoise.

Clondalkin scored a penalty to close the gap to just two points as the pressure began to mount on both teams.

However, that was as good as it got for the visitors. With about ten minutes to go, Ross Cooper got the match-sealing score and bonus point when he raced over, and the try was converted to leave Portlaoise winners on a scoreline of 27-18. Player of the Match was Portlaoise's Robin Foot.