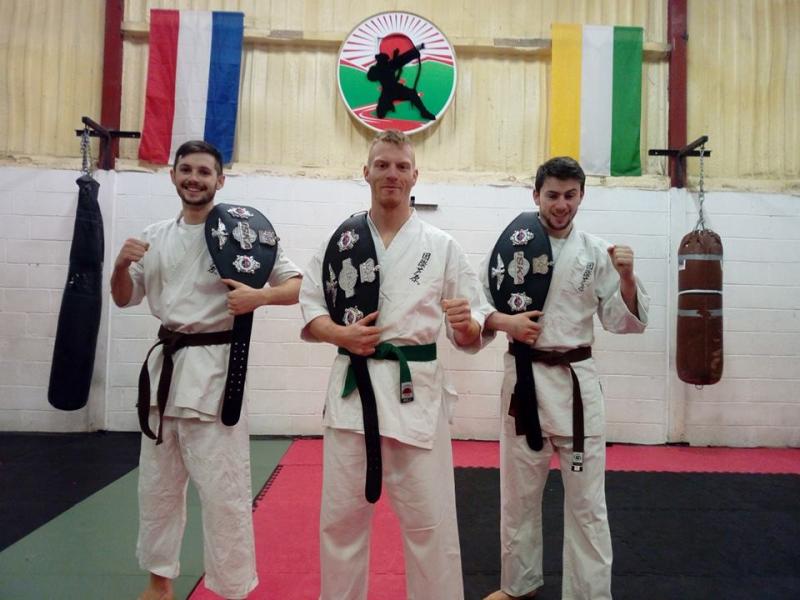 Padraig Bracken, centre, with the belt he won after his All-Ireland victory last year.

A Portlaoise man has been making a name for himself on the kickboxing scene in Ireland, and will now look to do the same internationally in 2018.

He will head to Glasgow in February for a Knockdown Karate tournament, and Greece in December for another international competition, as he looks to carve out a career for himself in the uncompromising world of professional combat sports.

He first took up martial arts at the age of 14, but didn't have his first Kickboxing fight until he was 18, and by his own admission, it was a slow road at the start.

"I started competing when I was 18, with very little success to be honest, but the last two years I have gone hell-for-leather at it, and now I'm building up a good reputation for myself."

When he says he is going hell-for-leather at it, he's not joking, with a formidable training regime powering him to the All-Ireland title last November. He is a member of the Motonari Budokai club in Tullamore, where he is coached by Darren Hand, and he also works in Tullamore, at MY Gym.

"I train seven days a week" said Bracken when we spoke to him recently, before outlining his typical day. "In the morning, I'll go to the gym before breakfast. Before 3pm I'll go for a run, and then by 4pm I'm in Tullamore after taking the bus over. I'll work out in gym I work at before classes, and I'll be there until seven or eight o'clock, and then I go down to the club, and I train with them.

"The weekends are more chilled then, I might just go for a hike or go swimming, something like that."

It's an incredible commitment, and one he admits isn't the most social one to have. "It is a very lonely road, but it's one I'm happy to travel."

His motivation for taking up the sport was rooted back in the schoolyard, where the bullying he suffered spurred him to find an outlet where he could learn to protect himself. "I was a very timid child, I was bullied a lot. You can imagine, I was a red-headed boy in primary school, I was really fat and I was socially awkward, so I was a target.

"The bullies were not going to stop, so when I was 12 I went to a boxing class, but all the bullies were doing boxing, so I took up karate instead, and I learned a lot. The bullies matured, and I never needed to use it (karate) at all, but it lead into Kickboxing and Jiu Jitsu."

He has learned quickly, and at only 23, he has plenty more time to learn too. He spent a good chunk of last year in Holland, fighting with K1 kickboxers, and hopes to return there this year for another training spell and, hopefully, a few fights too.

Ultimately he hopes to turn professional, and is grateful to a sport that allows competitors to build a strong reputation as an amateur before testing themselves at the next level.

As a way to earn a living, however, it is very tough. You are signing up for pain and punishment, and while the fights are tough, he revealed a healthy mix of nerves and calm sees him through those fights. "I'm always nervous before a fight, there is always a level of nerves and fear before a fight.

"Anyone that tells you they aren't nervous is a liar, but I just try to remember to take a few deep breaths and relax. The training is harder than the fight."

With an intense training regime, a clear plan and the maturity to make it all happen, there should be a lot more to come from Bracken in the years ahead.