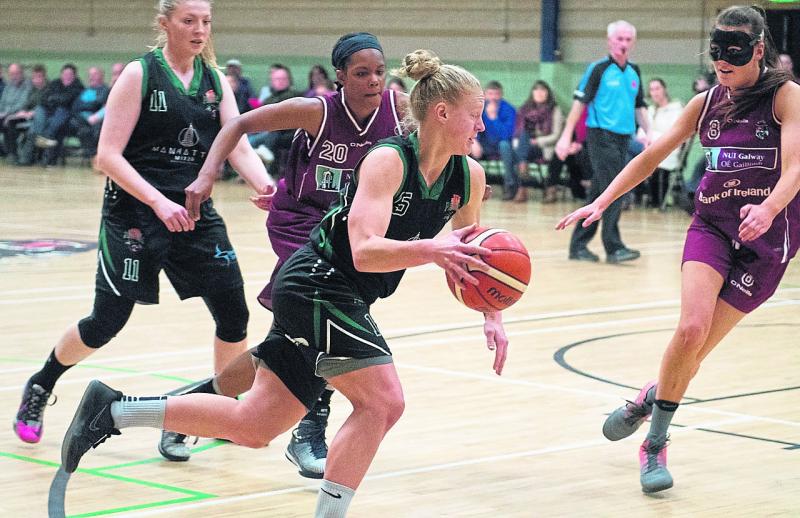 Stephanie Schmid in action for Panthers.

Portlaoise Panthers ladies travelled to the Mardyke Arena in Cork on Sunday afternoon for their first National Super League game of the New Year.

The ladies had a four week lay-off and this was to be a factor early in the game with Brunell’s fitness telling, as they stormed out to a massive lead that was too hard for the Panthers team to rein back in.

The big derby in the National Cup semi-final the previous weekend against Glanmire stood to Brunell and they hit the ground running from the beginning. The first quarter was played at a frantic pace with the home side hitting Portlaoise on the break time and again. It all seemed too easy as Brunell ran in four fast breaks early on.

At the other end the Panthers ladies were unlucky as the ball wouldn’t drop after some great play. Brunell were playing with great confidence on the offensive end, with their two American players leading the scoring, combining for thirteen points in the first quarter.

Stephanie Poland scored two baskets under the rim while Tracey Fallon hit two-fro-two at the line, but Brunell were fifteen points up at the end of the quarter.

The second quarter was another hard one to take for the visitors as Brunell piled the pressure on at both ends of the floor. The quick movement of the Brunell offence was creating problems and a lack of communication on defence compounded the problem as the home side got in for some easy scores.

The introduction of Deirdre Tomlinson energised the Portlaoise ladies as she began to penetrate the Brunell defence scoring five points in the quarter. Stephanie Schmid added two baskets as she converted on the break following some hard work under the boards by both Amy Dooley and Sharon Melia.

However, Brunell’s Breanna Bey was once again causing problems for the visitors as she used her strength down low and finished well off the board. Brunell took a 44-18 lead in at the break.

A big effort was required in the third quarter by the Panthers team as the game could’ve easily turned into a heavy loss and the ladies responded well, putting twenty points up on the board. They were eventually rewarded for their patience on offence with Amy Dooley scoring the first three baskets of the quarter.

Sinead Melia sparked into life and hit two three-pointers while adding a further two points after a great drive. But Brunell were still finding it all too easy to score and responded well with Ganser and Waters finishing well under the boards. Brunell still held the advantage heading into the final quarter but Portlaoise were starting to get into their rhytm.

Maeve Phelan worked tirelessly throughout on her first game back following injury that kept her out of last weekend’s underage semi-finals, but the damage was done early on in the game and Portlaoise just couldn’t make inroads into the early deficit.

Brunell were well worth their victory and Portlaoise will have to lift their heads again as they hit the road to Waterford next Saturday to take on WIT Wildcats.