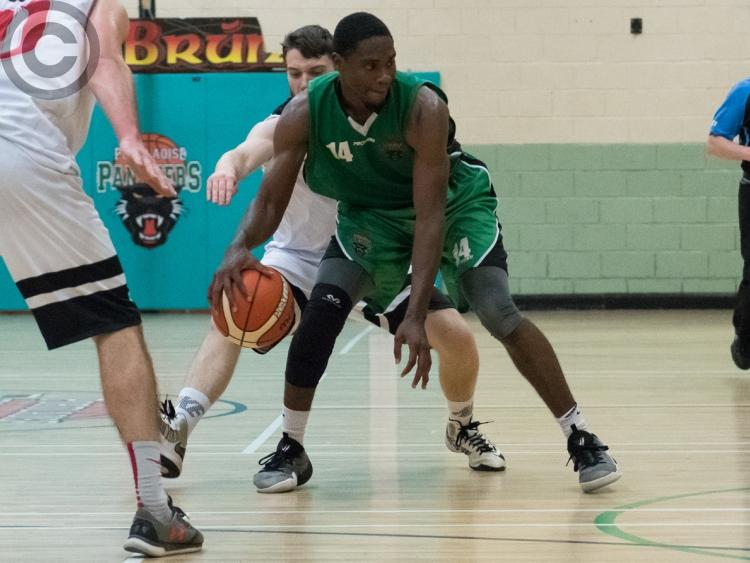 Tim Stewart starred for the Panthers.

Portlaoise Panthers Black continued their unbeaten start to the season on Sunday night as they progressed to the quarter final of the Midlands Cup following a comprehensive win over local rivals Kestrels.

The Panthers men have been on the receiving end of bad losses to Kestrels over the last number of years and were glad to get their second win of the season with another home league game to come.

Following on from another big win away to Tullamore the previous night Portlaoise stormed ahead with former Kestrels player Dylan Dunne beating the defence to notch up four points while Jack Dooley hit his first three of the game early on to push their advantage out to seven points midway through the quarter.

A very young Kestrels side struggled to contain a physical Panthers side and the impressive Timothy Stewart showed his athleticism elevating above two defenders to dunk in home. A flurry of three pointers by Dooley, Vilimas and Stewart gave the home side a seventeen point lead heading into the second quarter.

Kestrels got into the game in the second quarter with their experienced players Liam Guinan and Glen Mitchell doing all the damage hitting their full complement of nineteen points in the ten minute period.

But Portlaoise continued to find it easy to penetrate the Kestrels defence with Vilimas backing his defender down, spinning and finishing with his left hand. David Glynn began to hit form with an excellent three from distance followed by two lovely drives to the basket executing the finish under the board.

Duignan and Dooley continued to crash the boards and reaped their rewards with a basket each to finish off the scoring leaving their side with a nineteen point advantage on a scoreline of 46-27.

Portlaoise continued to rotate the squad and the reintroduction of Tim Stewart resulted in two early scores. Dylan Dunne was again causing problems and went four from four at the line while adding another basket off a good drive.

It was Conor Vandendries and Conor Foster who turned it on for the visitors in the second half as both combined for sixteen points, two threes each and getting to the board to add further scores. But again Stewart showed his class when required by twisting and turning his way to the basket finishing close to the rim.

Dooley rounded off the scoring in the third with third three of the game leaving the home side with a 65-40 advantage heading into the last.

Kestrels came out fighting and reduced the deficit at one points to sixteen points before Portlaoise stepped up a gear to finish out the game. The two Jacks, Scully and Dooley penetrated the Kestrels defence pushing the lead out beyond the twenty point mark.

Kestrels played right till the end with Foster and Vandendries leading the attack. But the damage was done early in this game and Portlaoise progressed to the quarter final seeing off their near rivals on a scoreline of 82-51.