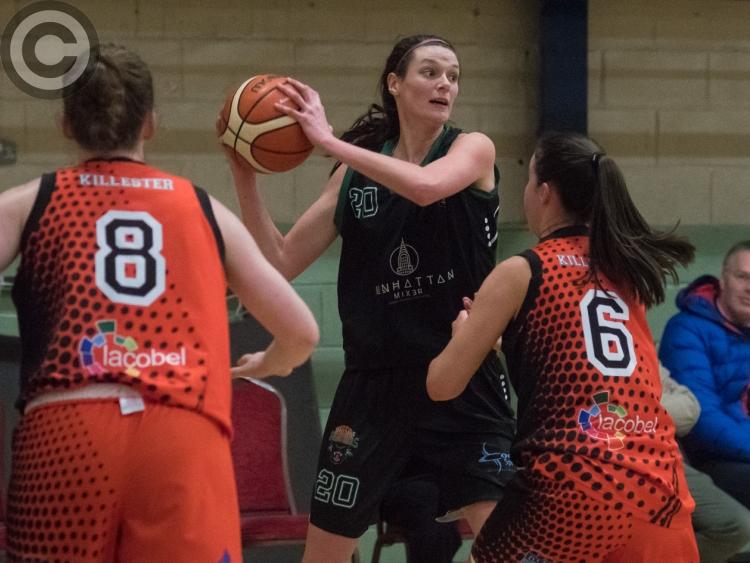 Portlaoise Panthers Ladies played host to Killester on Saturday night in the opening game of the clubs last double header of the season.

Killester sit in fourth place in the League and are pushing hard for a play-off spot. Portlaoise pushed Killester all the way in the game but couldn’t pull back the deficit from the second quarter.

They’ll be happy with their performance ahead of two important closing games against the two sides underneath them.
The Panthers side started brightly with a number of flawless offences ending in excellent scores. Portlaoise’s two Americans Stephanie Poland and Stephanie Schmid got the home sides first four scores as they went 100% from the field early on.

The team were transitioning well and shut out Killester’s set offences time and again. The only negative in the quarter came from turnovers as Killester punished bad passing running in four lay-ups.

Portlaoise kept their heads and ran in two baskets as they broke the Killester full court press with Maeve Phelan and Tracey Fallon getting their first scores of the game. Killester finished the quarter well and on the buzzer drew level with Portlaoise at fifteen points apiece.

The second quarter was a killer on Portlaoise as they struggled to break down the Killester defence. With Killester maintaining their press throughout it limited the time Portlaoise had to set up in offence and this led to them getting beaten to the buzzer when getting a shot off.

At the other end they were coming under pressure inside the key and as a team were failing to win the battle of the boards allowing second and third chances and at this level were getting punished with Killester notching up the scores.

Maeve Phelan continued to impress under the pressure placed on her and hit a big three pointer followed by a three point play by Amy Dooley. Stephanie Schmid sank her second three pointer of the game to keep Portlaoise in the game but Killester were in flying form in this quarter and managed a nineteen points to give them a ten point lead at the break.

Portlaoise regrouped at half time and began the third quarter well as they reduced their turnovers and got control of their boards. They were still struggling to get off good shots as they continued to run out of time due to the high intensity of the Killester defence.

Stephanie Poland and Amy Dooley were working hard and moving well in offence and got their reward with a basket each at the start of the third. Maeve Phelan added another two fine scores as she tore through the middle of the Killester defence.

Schmid added her third three pointer at the end of the quarter but Killester were still matching them score for score with Aisling Mc Cann leading the way with five points and backed up by Emma Sherwood who added four points. Killester took a twelve point lead into the final quarter.

Portlaoise were intent on finishing strong in this encounter and did just that as they put up their best scoring quarter of the game. Stephanie Poland got the first three scores with a mid-range shot and two more under the board.

Sinead Melia got into the groove and cut to the basket to finish of another good Portlaoise offence. Amy Dooley came up with the goods as she posted down low and cleaned up under the rim scoring seven points in the quarter.

While winning the last quarter they had left too much to do as the experienced Killester ran out winners by twelve points.