BASKETBALL - Panthers ladies edged out in local derby with IT Carlow 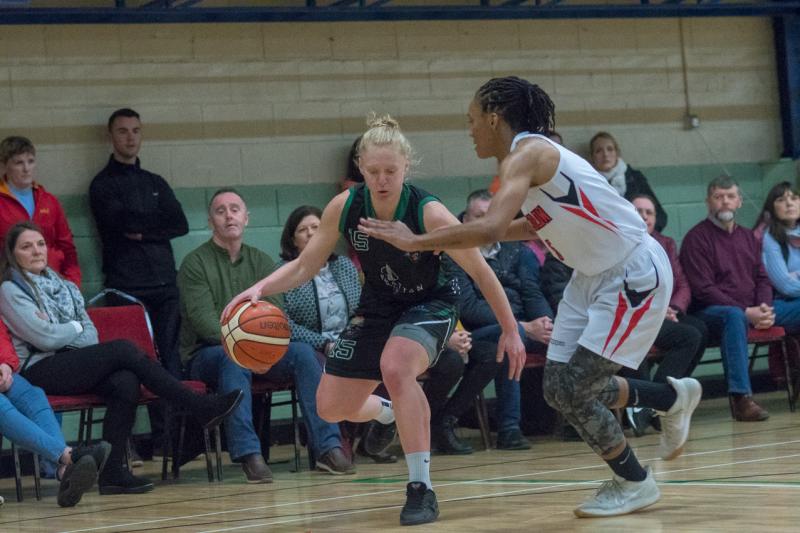 Portlaoise Panthers played host to near neighbours IT Carlow on Saturday night in the return fixture of the Womens Superleague.

Portlaoise Panthers had taken the points before Christmas but with Carlow having a new American on board since then the game was always going to go the distance.

A win for Portlaoise would’ve seen them safe from relegation as Mystics had slipped up at home, but Carlow had other ideas and took the win with a strong second half showing to draw level on points with Portlaoise with both sides holding their Superleague fate in their own hands with two games remaining. Both teams face off against Mystics in the next two weeks so all will be much clearer by then.

These games always draw an extra crowd and excitement of a local derby is always high but this game had the added incentive of Portlaoise having the opportunity of guaranteeing Superleague action for another season while leaving IT Carlow just one loss from potential relegation.

With that in mind the game lit up from the start with Carlow being the early aggressors drawing early fouls inside and going four from four at the line with Holli Dunne and Alexis Eckles hitting the mark. Portlaoise bounced back with Stephanie Poland and Tracey Fallon tying up the game.

But this sparked Carlow into a 14-5 lead midway through the quarter with Sarah Kenny and Eccles penetrating the Panthers defence and finishing strongly. A much needed timeout spurred Portlaoise into action with Stephanie Schmid finding her range adding five points while Stephanie Poland was causing damage inside down low.

Aoife Whelan and Holli Dunne hit two big three pointers while Maeve Phelan responded with one of her own as both sides went toe to toe. A basket late on by Dunne topped off an eleven point quarter for herself and gave Carlow a slender two point lead.

The second quarter saw Stephanie Poland continue to dominate as she scored nine points on the offensive end and commanded the boards in defence. Portlaoise shut out Carlow well throughout the second quarter with some great help defence by both Amy Dooley and Sharon Melia which kept Carlow to just nine points.

Stephanie Schmid was getting open looks at the basket from range and eventually got her second of the game to take the lead for Portlaoise for the first time in the game. Eckles was plugging away for the visitors as she continued to get the baseline look and finished underneath for the easy two. Portlaoise took a three point advantage into the half time break courtesy of an elbow shot by Sharon Melia.

The third quarter is always make or break in any game and Carlow came out the quickest as a lapse in concentration allowed an open three pointer by Sarah Kenny which straight away cut out Portlaoise’s advantage.

This was followed up by another bomb by Aoife Whelan but was luckily countered by a sweetly hit three pointer by Sinead Melia. The two sides were trading blows and not giving up much on either end.

But a late burst which saw two baskets in a row by Christine O’Gorman and a break-away lay-up by Megan Dunne gave Carlow a four point advantage heading into the final quarter.

With ten minutes remaining the game was finely in the balance still. Both sides were up for it but it would all come down to who could convert their opportunities. Schmid got the ball rolling for Portlaoise as she drained her third three of the game but Kenny answered quickly with a lovely drive and followed up with a big three.

Carlow were winning the battle as they went out with five guards and punished the mis-matches well. Kenny again came good with another three from the same spot and Portlaoise found themselves with a double digit deficit of the game.

Carlow had shut out the inside threat that had caused problems during the first half and Portlaoise were finding it hard to get anything to drop down the stretch. Carlow’s confidence showed as they finished out the game converting there opportunities at the line and took the game with eleven points to spare.

The important thing for Portlaoise is that they hold the advantage over IT Carlow in a situation where if they finish level on points they will have the better score difference. Hopefully this will not come into effect as they hope to finish strong in their last two away games of the season.