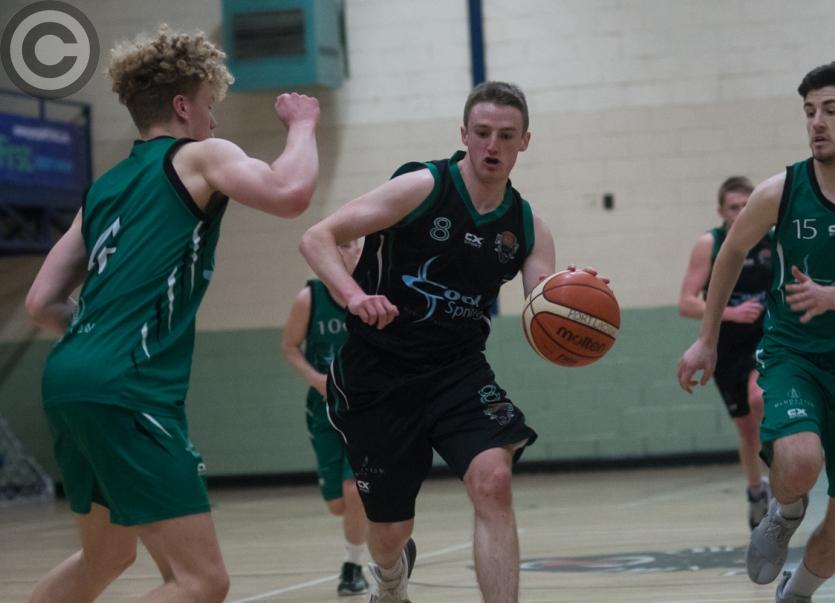 This was the second meeting of the sides with Panthers Black just edging the first game after a late onslaught from the Green team. Sunday night was no different with Black leading for the majority of the game but couldn’t pull away with Panthers Green staying right in contention till late in the fourth.

The win keep Panthers Black just one win behind League leaders Litpol with both sides still to meet again later in the season.

The first quarter was played at a frantic pace with both teams getting out on the break at every opportunity. Jack Dooley was first to register a score for Portlaoise but this was matched by a three pointer from Gary Morrissey.

David Glynn was the hot hand all day for Panthers Black and he got going early with four massive three pointers to give his side an early lead. Morrissey replied with another five points with captain Rian O’Connell adding another three pointer to close the gap.

Jack Dooley and Jamie Dooley were creating problems inside on offence as they combined for seven points late in the quarter, Mark Bartley replied with a lay-up to leave Panthers Black leading by four points on a scoreline of 24-20.

The pace of the game was maintained in the second quarter with the older Panthers Black beginning to struggle with yet another injury reducing them to just six players. But the energetic Benny Carroll ran the show from the point as he consistently weaved his way out of trouble to break the Panthers Green press.

This eased the pressure on his side and they continued to add to their lead with scores from Dylan Dunne and Peter O’Sullivan. Panthers Green went to their bench and got quick scores from Liam Kinsella and Evan Maher as they rallied to stay in the game. David Glynn popped up again to hit his fifth three of the game and with the defence stretched Benny Carroll hit another from the other wing.

A late surge from Panthers Green saw James Phelan hit three baskets in a row while O’Connell, Bolger-Hinds and Swayne added a basket each to leave just seven between the sides.

The third quarter saw both defences step up and make important stops with every basket becoming more valuable. David Glynn continued his streak with a sixth three pointer to start the quarter. Gary Morrissey wasn’t letting up either and matched it straight away before hitting his fourth of the game midway through the third.

Both sides matched each other score for score throughout the quarter with Jack Dooley getting three baskets inside the key while Swayne, O’Connell and Kinsella responded for Panthers Green. Heading into the final quarter Portlaoise Black held an eight point advantage.

With Panthers Black low on numbers the game was finely balanced for a big comeback from the Green team. Early scores by Mark Bartley were answered by a three pointer from O’Sullivan.

The teams slowly got to grips with each other defensively but David Glynn finished the strongest to top off an amazing night as his spun his way to the basket time and again. He scored ten of his sides last quarter total to take his own personal tally to a massive thirty points.

Pierce Bolger Hinds rounded off the scoring for Panthers Green but Panthers Black took the win on a scoreline of 79-65.