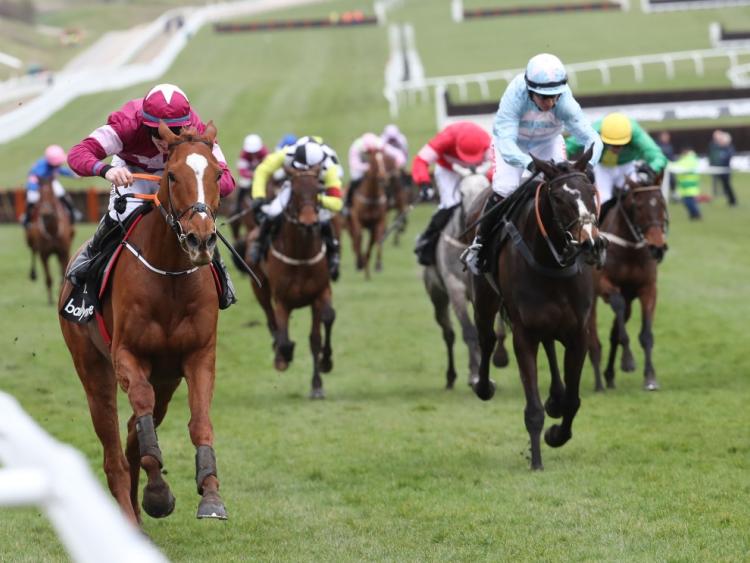 Irish horses made Cheltenham their own once again and a final tally of 17 winners saw Irish trainers post the second highest tally ever at the Festival.

Gordon Elliott retained his leading trainer’s title with eight winners over the four days, edging out his great rival Willie Mullins who finished with seven. Elliott’s tally matches the record number of winners set by Mullins in 2015.

Davy Russell took the leading rider’s crown for the first time with four Cheltenham festival winners including a spectacular day three treble. He finished level with teenage star Jack Kennedy, who also finished with four winners but had fewer placed horses than Russell.

Paul Townend finished the week with two, the same tally as Ruby Walsh, the top rider at the Festival on 11 previous occasions, who was ruled out of the remainder of the Festival after his fall in the second race on Wednesday.

The 17 Irish-trained winners were spread across 11 different owners and four different trainers with Pat Kelly and Henry De Bromhead also training winners again this year. Half of the races (14) at this year’s Cheltenham Festival were won by Irish-bred horses.

In all it was another hugely successful festival for the travelling team and the Minister for Agriculture Food & Marine, with responsibility for the horse racing sector, Michael Creed TD, today hailed Ireland’s performance at the Cheltenham Festival.

Speaking at the Cheltenham Festival, the Minister said: “The securing of the Prestbury Cup marks the culmination of a fantastic week in Cheltenham for Irish owners, trainers and jockeys, with numerous individual, stable and team achievements. I’d like to convey my heartiest congratulations to all involved. I would like to pay particular tribute to leading trainer Gordon Elliott and leading jockey Davy Russell for their successes in what was a memorable week for Irish racing.”

Brian Kavanagh, CEO of Horse Racing Ireland, said: “Once again, Irish trainers, owners and jockeys have had a week to remember at Cheltenham and I would like to congratulate all of those who enjoyed success including Gordon Elliott, Davy Russell and Gigginstown House Stud, winners of the leading trainer, jockey and owners’ titles. Indeed, it was truly remarkable to watch six Irish-trained winners on both Wednesday and Thursday.

“What has happened on the track this week merely underlines the current strength and quality of racing in Ireland; we had two memorable days at the Dublin Racing Festival at Leopardstown in early February and I’d expect that the upcoming festivals at Fairyhouse and Punchestown will continue to showcase Irish National Hunt racing at its very best.”

Earlier in the day the Minister, accompanied by HRI Chairman Joe Keeling and HRI CEO Brian Kavanagh held a series of meetings with UK and Irish horse racing sector stakeholders specifically to discuss matters arising from the UK decision to leave the EU.

Willie Mullins had no winner on the opening two days of last year’s Festival, but he got off to a flyer this time with a treble on Tuesday. Footpad was the first Mullins and Irish-trained winner of the week when taking the Racing Post Arkle Chase in the hands of Ruby Walsh and Benie Des Dieux followed up for both men in the OLBG Mares’ Hurdle before Rathvinden won the National Hunt Novices’ Chase to give top amateur rider Patrick Mullins his fourth Cheltenham Festival success.

On Wednesday, Samcro got Gordon Elliott, the leading trainer at the Cheltenham Festival for the first time last year, off the mark when taking the Ballymore Novices’ Hurdle with the sensational Jack Kennedy the man on top. Elliott was to match Mullins’ opening day exploits with three winners on the day and he also claimed the Glenfarclas Cross Country Chase with Tiger Roll, a first Festival success for 24-year-old Dunshaughlin, County Meath jockey Keith Donoghue, and the Fred Winter Juvenile Hurdle with Veneer Of Charm, a second winner on the day for Jack Kennedy. Tiger Roll began an unprecedented run of nine successive Irish-trained winners that was only to end in the final race on the following afternoon.

From Craughwell, County Galway, Pat Kelly made it three winners in successive years for owner Philip Reynolds when Presenting Percy, victorious in the Pertemps Network Final Handicap Hurdle last year, took the RSA Novices’ Chase in tremendous fashion to give Davy Russell his first winner of the week. Willie Mullins brought his tally to five with a Wednesday double thanks to Bleu Berry, a breakthrough Cheltenham Festival winner for Mark Walsh, in the Coral Cup Handicap Hurdle and the Katie Walsh-ridden Relegate in the Weatherbys Champion Bumper, a third Festival success for the Kill, County Kildare amateur.

For the third year running, Irish trainers captured six of the seven races on Thursday and fell just short of a clean sweep when taking second and third places behind the sole British-trained Missed Approach in the final event on the card.

It was a history making day for Willie Mullins who became the winning-most trainer at the Festival as the Paul Townend-ridden Laurina gave him a 61st winner when routing the opposition in the Trull House Stud Mares’ Novices’ Hurdle. Mullins had earlier tied Nicky Henderson’s record of 60 winners when Penhill, another ridden by Townend, won the Sun Bets Stayers’ Hurdle.

Gordon Elliott went one better than his great rival with three Thursday winners. Once again, he teamed up with Jack Kennedy to land the JLT Novices’ Chase with Shattered Love while Davy Russell rode both Delta Work and The Storyteller to win the Pertemps Network Final Handicap Hurdle and Plate Handicap Chase respectively. It was Russell’s third successive win in the Pertemps Network Final Handicap Hurdle after partnering Pat Kelly’s Mall Dini in 2016 and Presenting Percy last year.

Michael O’Leary finally got his hands on the trophy for the Ryanair Chase, a race he has sponsored since 2006, when Balko Des Flos, another ridden by Davy Russell, ran out a most comprehensive winner to give Henry De Bromhead a fourth Cheltenham Festival success.