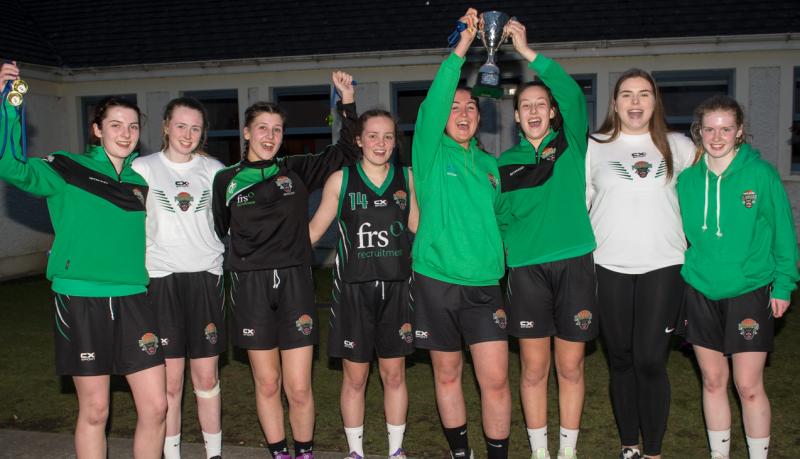 The Panthers girls began the defence of their title with a semi-final against an up-and-coming side in St Laurence's.

The girls started the game very nervously and were making some very uncharacteristic mistakes. They were allowing Larrie Birds control the game and found themselves trailing half way through the quarter.

An early time out helped to settle the girls back into the game and they began to perform better and managed to take a four point lead at the end of the quarter having not performed at all.

The second quarter showed a huge jump in intensity from our girls. A change in defensive tactics saw the girls press up and Larrie Birds were unable to respond. Shauna Dooley got her hand on a few inbound passes for quick baskets and Grainne O’Reilly was applying huge pressure forcing turnovers and 8 second violations.

Ellen Garvey was having a super game now picking up rebounds on both ends of the floor and settling herself for some great scores. Rebecca Reddin was running the floor really well and was getting back to make crucial interceptions and set herself up for scores on the fast break.

Jade Burke who’s confidence is building game by game was taking girls on one in one to the basket and drawing fouls in the process putting herself on the line with the opportunity to add two more points.

Ciara Byrne was a true leader, she controlled the game on offense and was a stalwart on defense picking up some great fast breaks and adding to the girls tally. Jasmine Burke was brilliant under the boards and was trailing really well picking up some well worked scores.

The second half continued in much the same fashion with Portlaoise the better team on both ends of the floor. The girls were very effective picking up some great rebounds and creating some very baskets.

After a slow start the girls kept the strong intensity going for the remainder of the game and finished with a comprehensive win.

The girls took to the floor on Sunday against Tullamore in what was going to be a tough battle right to the final whistle.

While Portlaoise took the opening three scores with a superb display by Jasmine Burke Tullamore were determined not to let let a big lead build up and they pulled back four points through some good, patient play.

Portlaoise however had other plans and applied a press and were soon back to a nine point lead after two brilliant scores from Shauna Dooley and Ciara Byrne, and Grainne O'Reilly added two more points after being fouled on the end of a fast break.

Jasmine Burke also added her eight points of the quarter after an excellent offensive play. Rebecca Reddin was again brilliant on defense she has become a integral part of the team and was again showing why.

Ellen Garvey when introduced into the game carried the form she had shown in the semi final and was very unlucky not to add to the girls tally. Tullamore drew the lead back to six at the end of the quarter with a late three-pointer.

Portlaoise put in a much better performance in the second quarter Jasmine Burke added another score early followed by a massive three pointer by Shauna Dooley. The girls were starting to get into a better rhythm and the introduction of Jade Burke made a big impact as she picked up a score almost straight after Ciara Byrne picked up a steal.

The girls were settling on offence and a really well executed play was rewarded with a long range two pointer by Grainne O’Reilly. The intensity of defence was proving to be too much for Tullamore and they were now struggling to find scores.

Jasmine Burke added seven more pints to her tally before Ciara Byrne finished the quarter with a fake and jumper from the top of the key. The girls held their opponents to only four points in the quarter and took a strong lead into the third.

The girls kept up the intensity at the start of the third and stretched their leadnearly straight away with another basket by Dooley assisted by Byrne who was then rewarded with some great baskets of her own scoring 6 consecutive points.

Rebecca Reddin had two long range jumpers roll around the net and pop out before she had a brilliant interception to stop Tulamore from scoring. Ellen Garvey picked up some great defensive rebounds and was very unlucky not to capitalise on an offensive one.

The every reliable Jasmine Burke made a huge interception and finished an open lay-up before Grainne Oreilly finished the girls scoring.

The last quarter was another good show from the Portlaoise girls. Jade Burke was getting into some great positions and used intelligent patient play to set up Rebecca Reddin for a superb long range shot. Ciara and Grainne continued to dominate at the top on defense and forced numerous turnovers to set up good scores for Dooley and Jasmine Burke on the break.

The girls continued to work hard right until the final whistle and took a well deserved win with all players contributing to the girls score line.

The girls and their coaches will spend the best couple of weeks preparing for the AICCs which take place in Parochial Hall, Cork on April 14th and 15th.