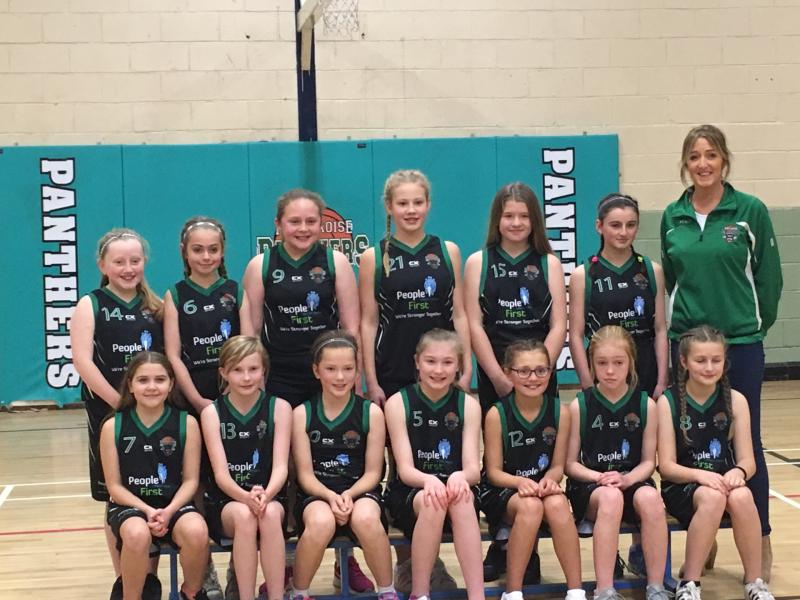 The Portlaoise Panthers U-12 girls team.

A busy ten days for the Panthers U-12 girls culminated with the Top 4 final on Saturday the 24th of March, but first the winners of the Midland League Division 1 had to be decided which meant a playoff against Athlone.

The Panthers travelled to their opponents on Wednesday the 14th March for an 8pm tip off. After a nervous start the Panthers found themselves trailing by four after the first quarter.

A very tense and exciting fourth quarter saw the Panthers claw back the Athlone lead eventually going two point up with two minutes on the clock. The Panthers defence kept Athlone scoreless and with Portlaoise scoring two free shots in the dying moments of the game, the Panthers won the game and League much to the delight of the large crowd of supporters who had travelled to the game.

A week later saw the first semi-final of the Top 4 playoffs, the Portlaoise Panthers opposition was Ballyroan. This was the fourth time this season for these two teams to meet and Portlaoise continued to be too strong for Ballyroan.

Although Ballyroan put up a staunch defence they were unable to stop Portlaoise scoring. The Panthers won the game on a score line of 60-9.

The Panthers opposition for the final was Tullamore and the game was played in Portarlington on Saturday. Tullamore although beaten by Portlaoise in their previous two meetings were not there just to make up the numbers, they started the game very strongly and took an early lead. Portlaoise fought back hard and managed to finished the first quarter just five points down.

Portlaoise upped their game for the second quarter and excellent work under the Tullamore basket resulted in numerous rebounds scored. The lead Tullamore had built up was clawed back and a Portlaoise basket on the buzzer that took some time to be allowed saw the score at half time 19-16 in the Panthers favour.

The third quarter saw both teams swapping scores and was played at a fast pace that kept the supporters on the edge of their seats. Portlaoise took a narrow lead of one point into the last quarter.

Playing with a determination and drive instilled into the team by their coach over the last 6 months the Panthers outscored Tullamore by 15 points in the last quarter and won the first of seven finals that the Panthers had qualified for over the weekend.

The U-12 girls put behind early defeats in the season and worked hard and should be proud as 2018 U-12 Midland League champions.