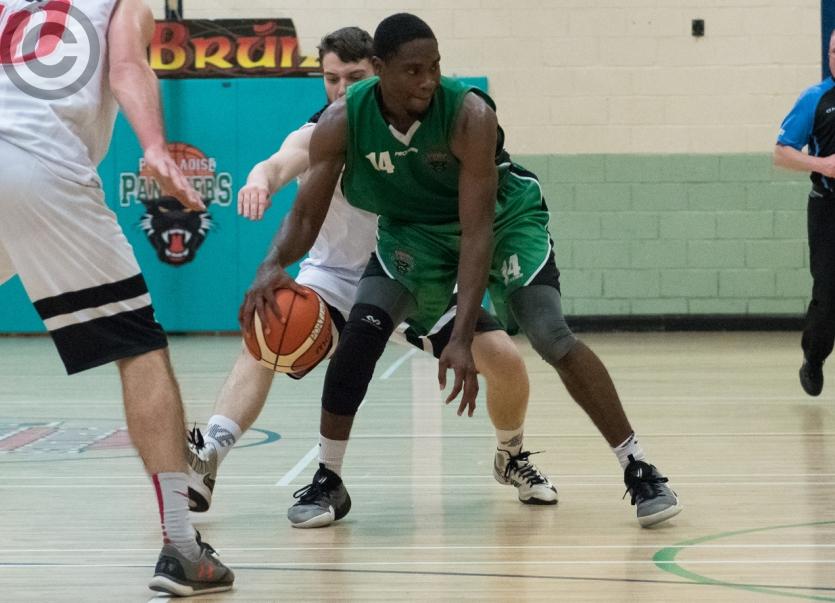 Tim Stewart starred for the Panthers.

Portlaoise Panthers Black picked up the first senior silverware of the season on Friday night in St Mary's hall after a hard fought win over Litpol in a very high scoring entertaining battle.

Both sides sit at the top of the Midland League table on one loss apiece with Portlaoise Black avenging their league loss with a brilliant team performance.

Portlaoise got the ball rolling from the tip with Timothy Stewart finding Jack Dooley for the easy lay-up. Stewart had the hot hand early on scoring seven points on the spin to give Portlaoise an early lead. But Liptol are dangerous from range and quickly got themselves back into the game courtesy of two fine scores from Juraitis.

Jack Dooley added another two baskets after penetrating to the board and pushed Portlaoise further ahead. David Glynn and Peter O’Sullivan notched up another six points between them and it looked like the Panthers men were about to blitz Litpol. But a late response saw Litpol pull within two at the end of the quarter with Blekaitis and Sevelis hitting the mark from three point range.

The second quarter was another high scoring quarter with both offences getting the better of their counterparts in defence.
Portlaoise continued to hit the mid-range jump shot and this forced Litpol to step out, the home side went to work inside with Jamie Dooley and Mantis Vilimas using their strength to fend off their man to finish under the basket.

David Glynn continued his excellent form of late to rattle off two unanswered three pointers to give Portlaoise a deserved ten point lead midway through the quarter. Portlaoise fell asleep in defence and allowed some easy shots up with Blekaitis and Gediminas Sevelis hitting the big three once again.

Craig Scully got in on the scoring late on as he found great position down low and popped the ball into the basket to keep Portlaoise on top. The one worrying thing for Portlaoise was that Litpol’s point guard Sevelis was beginning to cause problems as he rattled off his sides final nine points of the half. But Portlaoise still held the advantage and led 49-41 at the break.

This first half was a battle of the offences throughout and this wasn’t about to change as the defences continued to struggle. Litpol made a run early in the third with Juraitis cutting through the centre of the Portlaoise defence on two occasions and unfortunately for the home side Sevelis came out like a train accounting for sixteen of his sides tally in the quarter which included four contested three pointers.

Portlaoise plugged away and kept themselves ahead on the scoreboard with Stewart and Dooley pounding the heart of the Litpol defence time and again. The Panthers men could’ve been a lot further ahead but couldn’t punish Litpol’s indiscipline from the line.

The third quarter ended with Portlaoise just two points ahead with the game in the balance heading into the final ten minutes.
A nervous final quarter ensued and both sides began to find scores hard to come by. The defence at both ends had stepped up considerably but Portlaoise were still finding Sevelis a handful to deal with but luckily he was their only player to catch fire.

Portlaoise turned to the experience of Tim Stewart down the stretch and he didn’t disappoint as he jammed home his second dunk of the game to keep his side ahead. Sevelis brought his own personal tally to thirty eight points in the game hitting his sixth and seventh threes in the process and was worthy of his MVP award.

Portlaoise controlled things well at the end of the game and with the visitors in foul trouble late on the Panthers men finished the game from the line to give themselves a five point victory and lift the Midlands Cup for the first time in four years.