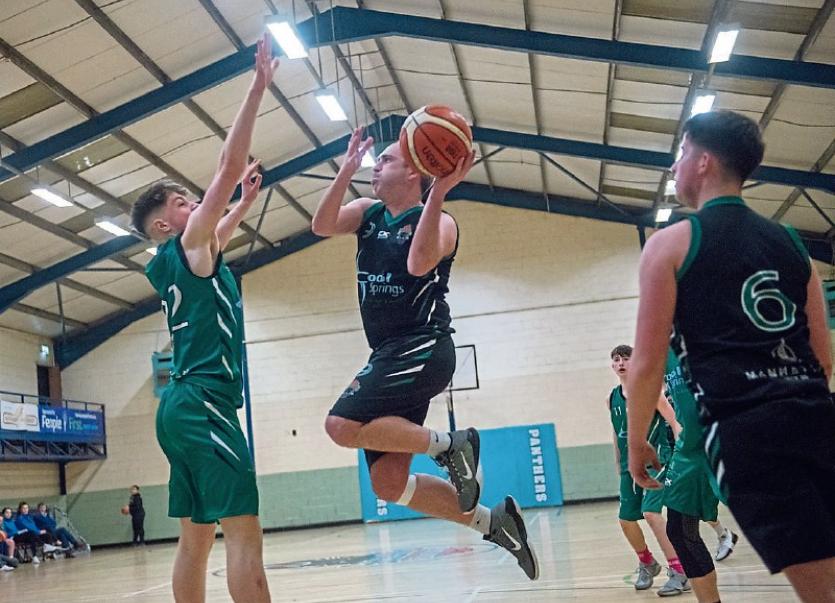 Portlaoise Panthers Black played host to Kestrels on Friday night looking to maintain their position at the top of the league table. Both teams were short a number of players but Portlaoise held the edge throughout to take a fourteen point win.

Panthers Black stormed into an early lead courtesy of scores from Mantas Vilimas and Craig Scully. Four baskets in a row from Jack Scully gave Portlaoise a comfortable advantage midway through the quarter with Kestrels finding the going tough under the baskets.

Liam Guinan got Kestrels off the mark with a three pointer while Conor Vandendries a further two baskets to close the gap. The Scully brothers continued to cause trouble inside and finished the quarter strong combining for eighteen points in the first quarter. Portlaoise Panthers Black led on a scoreline of 24-17.

Kestrels showed great grit and determination in the second quarter as they fought back through the hot hand of Liam Guinan as he hit three contested three pointers. Portlaoise were struggling somewhat in defence but were managing to covert at the other end to keep their noses in front.

Peter O’Sullivan found space to drop in two baskets while Dylan Dunne hit the mark from three point range. The introduction of Jimmy Ward gave Portlaoise some added energy and he quickly made an impact with two baskets under the boards.

Portlaoise still had the advantage and at the half time buzzer they led 39-34.

The third quarter was a big quarter for the home side as they outscored Kestrels 18-9. They closed out on the shooting threat posed by the visitors which allowed them to keep Kestrels to single digits while pushing on themselves in offence.

Craig Scully and Mantas Vilimas took full advantage of the mis-matches created inside and they worked well together combining for ten points in the quarter.

Jack Dooley and Jack Scully got out on the break to finish well at the basket and a big three pointer from Jimmy Ward rounded off a great quarter for the Panthers men.

They led on a scoreline of 57-43 heading into the last.

The fourth quarter saw both sides go score for score with Jimmy Ward straight away hitting another three pointer but this was cancelled out by scores from Bannon and Guinan. Portlaoise continued to work the ball well in offence and were rewarded by further scores from Vilimas and the Scully brothers.

Conor Foster kept plugging away for Kestrels adding seven points for his side but the game had slipped away from them in the third quarter as Portlaoise hung on to take the win on a scoreline of 72-58.