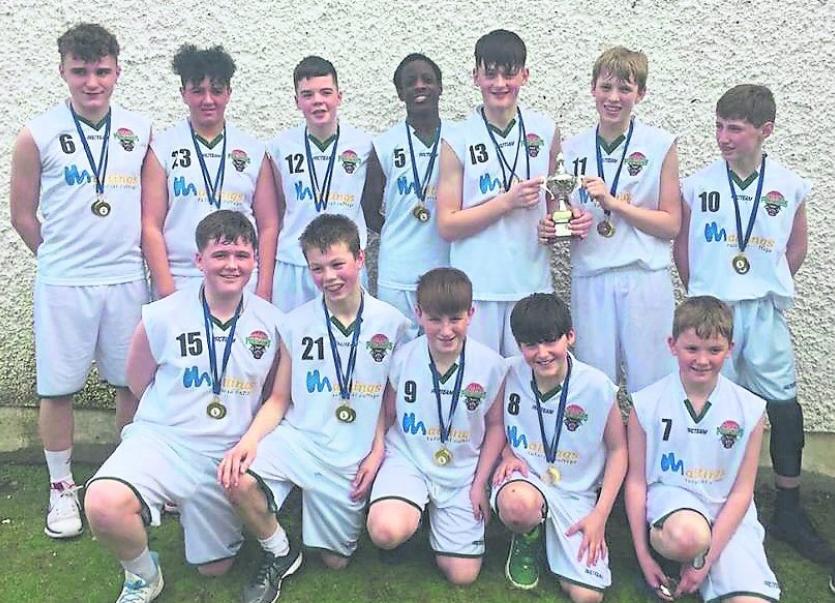 The Portlaoise boys U-14 basketball team travelled to Portarlington to play Athlone in this year's Midlands Top 4 Final.

Portlaoise travelled knowing that only a top rate performance was going to give them a chance against League winners Athlone who had beaten them by 10 points in their last meeting.

Portlaoise did turn up to play and set a marker down early as they went on a full court press right from the tip off. Athlone got caught cold as Barry Fitzpatrick and Jason Alade put early points on the scoreboard.

Portlaoise continued to turn over the ball on several occasions with great work from Cathal Mc Evoy and Aaron Dooley. Athlone eventually settled to get a couple of good baskets but this quarter was dominated by the Portlaoise boys as Michael Gilsenan finished with three unanswered baskets after great work from his team mates Jason Alade and Aaron Dooley to see them lead by seven points.

The second quarter saw a new five players from each club take to the floor but again the Portlaoise lads hit the ground running with some great play resulting in baskets from Eoin Murphy and Brochan O'Reilly.

Portlaoise continued with their full court press and this intense defensive forced more turnovers with good work from Cillian O'Connell and Dylan Cahill which resulted in baskets through Eamonn Sam Rahi.

Portlaoise were completely on top at this stage with the Athlone boys not able to cope with the defensive pressure as they went into an 18 point lead thanks to good shooting from Dylan Cahill and Brochan O Reilly.

As the half-time whistle approached Athlone did get a couple of good baskets but still were behind by 14 points, 27-13.
Athlone came out strong at the start of the second half and showed why they were League winners as they went on to get a few fine scores. Portlaoise continued battling for every ball with good performances from Jack Byrne and Matthew Coonan and were eventually rewarded for their work rate with baskets coming from Barry Fitzpatrick.

Both teams were now playing Well, exchanging baskets, Athlone were having their best spell of the game and it was a time for Portlaoise to dig deep as Eamonn Sam Rahi and Dylan Cahill were rebounding anything that came their way.
Portlaoise finished the quarter strong with a massive three-point shot from Brochan O Reilly to the delight of their huge travelling supporters to see them lead by 12 points.

The final quarter had everything a Cup Final should, drama, excitement, passion, determination and no shortage of skill from both these two well organised teams, the pace never slowed as both were fast breaking at every opportunity.

Both were getting some great scores, Barry Fitzpatrick and Eoin Murphy got the first couple of baskets for Portlaoise. Athlone went on their own full court press to try to bridge the gap, but Portlaoise held their nerve, passing through it to get baskets from Eamonn Sam Rahi and Brochan O'Reilly, who was eventually top scorer of the game with an excellent 15 points.
Athlone threw everything they could and got the gap down to six points but that was as good as it got for them as they were left to rue a slow start in the first half.

For the Portlaoise lads this was a huge victory in what was definitely their best team performance of the season as they went on to a well deserved nine point win.

The team will continue training as they prepare for the All-Ireland Club competition to be held in Tralee on the weekend of the 7th April.

The Portlaoise boys U-14 basketball team travelled to play Kildare Gliders in the Midland Area League Top 4 semi-final.
The game started at a hectic pace with both teams playing well, Portlaoise had good performances from Jason Alade and Michael Gilsenan. In the next couple of minutes scores were at a premium with both defensives working very well.
Portlaoise were eventually rewarded for their hard work with baskets from Cathal Mc Evoy and Aaron Dooley. Kildare also got a couple of good baskets to see the teams level on a few occasions.
Portlaoise continued playing well through Barry Fitzpatrick and Jason Alade but it was the Kildare lads that edged it by a single point at the end of the quarter. The second quarter saw a new five players from each club take to the floor and it was Portlaoise who settled the better with a couple of fine baskets from Cillian O'Connell and their captain Dylan Cahill.
They continued to dominate the quarter with strong man to man defensive that turned over the ball on several occasions resulting in baskets from Brochan O'Reilly and Eamon Sam Rahi. As the half-time whistle approached Portlaoise opened up a 10 point lead thanks to good work from Dylan Cahill and Cillian O'Connell.
The second half saw the game open up into a good contest with both teams playing well, exchanging baskets, Portlaoise got scores through Amaan Sanni and Barry Fitzpatrick.
As the quarter went on Portlaoise upped the tempo again with strong defensive denying the Kildare lads scoring opportunities while at the other end they kept the scoreboard ticking over with baskets from Matthew Coonan and Amaan Sanni who got six points in this quarter alone to increase their lead to 15 points.
The last quarter saw both teams relax with the final outcome in little doubt, Portlaoise went on to run the ball at every opportunity resulting in baskets from Michael Gilsenan and Eamonn Sam Rahi who was putting in one of his best performances of the season.
Portlaoise finished the game better with baskets coming from Aaron Dooley and Brochan O'Reilly who was top scorer with an excellent 11 points to help his team go on to a well deserved win that saw them go through to this year's Top 4 Midlands Final against Athlone.