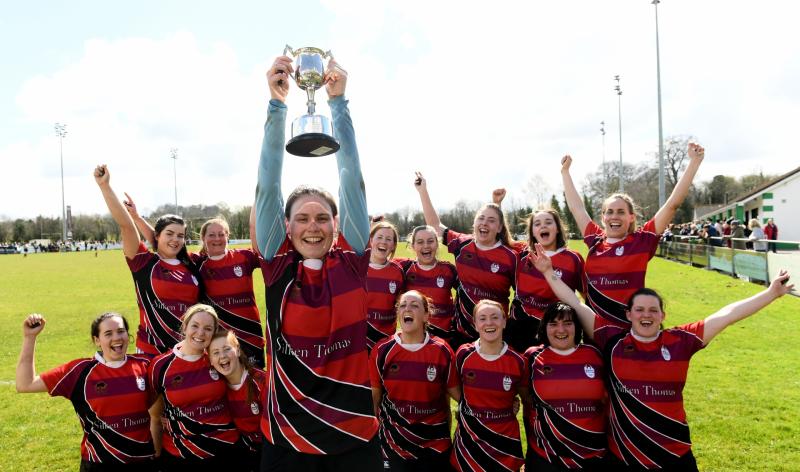 With a league title on the line, the women’s teams from Portlaoise RFC and North Midlands Falcons (an amalgamation of Portarlington RFC and Cill Dara RFC) travelled to Naas Rugby Club last Sunday.

Having won both of their head-to-heads during the regular season, it was Portlaoise who were favourites to pick up the silverware. However, thanks to a dominant team performance and three clinical finishes from full back Aoife Murphy, it was the Falcons who secured the title in perfect playing conditions.

The early stages of this game saw Portlaoise controlling both territory and possession of the ball with captain Diane Lawlor, Yvonne Palmer and Claire O’Connell setting the tone with penetrating carries.

However, the Falcons’ defence held strong and they weathered the storm to clear their lines unscathed after seven minutes of intense Portlaoise pressure.

Amazingly, this was to be Portlaoise’s final visit to their opponents red zone in the first half as the Falcons completely turned the tables to utterly dominate until the break. Their pack worked hard to secure good clean ball for their scrum half and captain Kate Tynan who looked to release their exciting back line at every opportunity.

With Hannah Mulcahy looking commanding at out half, the Falcons showed good handling to get the ball wide at every opportunity only to be met by excellent cover tackling by Rachel Palmer, Louise Cody and full back Emma Brophy.

On 26 minutes Falcons prop Andrea Broughan broke from the back of a maul and powered towards the line only to be held up and penalised for not releasing. However the Portlaoise kick did not find touch and was collected by Falcons full back Aoife Murphy, who charged back into Portlaoise territory and fed centre Caoilfhionn Culliton who found Orla O'Donovan in the wide channel and the winger looked to finish but was well tackled into touch by Gemma Palmer.

Two minutes later the Falcons were again on the attack when forward Laura Oakley broke and her backs then took over and worked Aoife Murphy into space. Murphy showed some good footwork to work her way towards the line but an outstanding cover tackle from Yvonne Palmer prevented what looked like an inevitable score.

The first score of the game then came with half an hour on the clock after Portlaoise’s Tina Wright pounced on a loose ball on halfway and when her teammates looked to secure the possession Falcons Amy Guilfoyle appeared to be in at the side of the ruck when she put hands on the ball but the referee allowed the turnover.

Tynan then gave quick ball to Mulcahy who found Murphy who again dazzled the large crowd with a series of sidesteps to weave her way through the Portlaoise defence and score. Mulcahy added the extras and her side led 7-0 which they took into the break.

The early stages of the second half saw both sides working hard to try to take control of the game with Claire O Connell and Nicola Larkin proving most effective for Portlaoise while Sarah Pickford and Lorraine Byrne looked to counter their efforts.

However, the crucial second score fell to the Falcons after O’Connell had secured a brilliant turnover only to be stripped by Vivienne Keary who passed to Kim Tully and the front row showed good hands to find Murphy who unleashed another exquisite side step before finishing powerfully. Mulcahy again converted and the Falcons lead was doubled.

Portlaoise responded brilliantly to this setback and enjoyed their most effective phase of the game as scrum half Rachel Murphy steered her pack into Falcons territory before a break from Steph Gleeson opened up their rivals’ defence and a series of excellent draw and passes created space for Shauna Carroll to finish in the corner and reduce the deficit to nine points with the scoreboard reading 14-5.

The next clear chance fell again to the Falcons when Laura Oakley brilliantly stole a Portlaoise lineout after 57 minutes and when Mulcahy and Culliton worked a good loop move Mulcahy passed to substitute Grace Phillips who was well tackled into touch.

From the resulting lineout Portlaoise cleared their lines only to see their opponents return the ball through Culliton who was looked likely to score only to be held up by some more courageous cover tackling by Portlaoise.

From the scrum Culliton was again stopped short but this time Tynan moved the ball quickly to Murphy who made no mistake in finishing to score her hattrick and restore her side’s fourteen point lead.

Portlaoise refused to concede defeat and showed good patience as they marched themselves deep into Falcons territory with less than ten minutes remaining. Nicola Larkin then passed wide to Shauna Redmond who was tackled high earning a penalty for her side just five metres short of the try line.

They took a tap penalty and Yvonne Palmer, O’Connell and Lawlor all made big carries before a knock on denied them a much needed score. From the resulting scrum the Falcons showed the brave intent that had put them in control of the tie as they ran the call from under their posts and centre Keary broke and relieved the pressure bringing play back into the Portlaoise half.

Portlaoise had one more go but a good breakdown steal from Lorraine Byrne regained possession for the Falcons and they manged the ball well in the closing minutes to the delighted of their large crowd of supporters from both the Cill Dara and Portarlington clubs.

The final whistle was met with a huge release of emotion from the Falcons players who should be very proud of their consistent progress throughout the season and they all rushed to their coach, former player Cassie Dunne, who has brilliantly planned their development.

Dunne, who was forced to retire prematurely from playing, ensured that her players peaked at the perfect time as they put in their most impressive performances to comfortably beat Tullamore in their semi final and then overturn the league results with Portlaoise to completely dominate the final.

Every member of the squad put in their seasons best performances in these crucial games and achieving this from her players would suggest that there is a very bright future ahead of this impressive young coach.