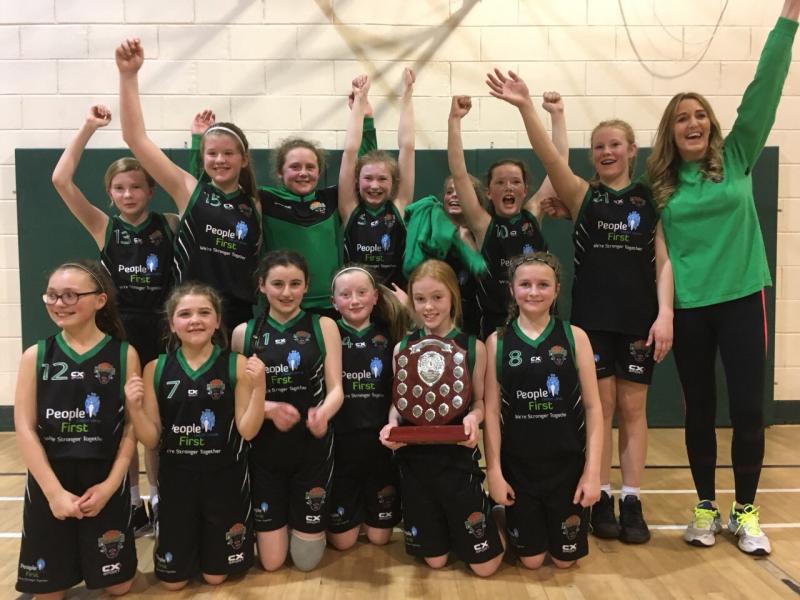 The Portlaoise Panthers U-12 team celebrate their victory.

The Portlaoise Panthers U-12 girls played against Kilkenny Sparks last Tuesday in the final of the Kilkenny Cup.

This was their third meeting of the season and with one win apiece, everyone was expecting a close and exciting game.

Forgotten boots, a broken clock and late opponents were little things before a game starts in the greater scheme of things, but they were enough to unsettle a team that are as disciplined and as well coached as these.

Kilkenny unleased a plan that had wave after wave of attack. Unable to hold back the Kilkenny team, the Panthers were quickly trailing by six points.

It took a while for the Panthers to compose themselves and after a much-needed time out the Portlaoise girls were able to get two scores on the board. However, the quarter finished with the Panthers trailing on a score line of 19-4.

Recovering from their nervous start the Panthers burst into action, with staunch defending for the entire quarter seeing them keep Kilkenny scoreless and an unrelenting attack from the Panthers saw them claw back the Kilkenny lead.

Portlaoise were unlucky not to score more but the Panthers team raised the fragile hopes of the large crowd of supporters by finishing at half-time 19-15 down.

With neither team willing to give up, the game was played from end to end at a tremendous pace, scores were swapped, timeouts were called and the atmosphere was electric.

Kilkenny scored seven points despite a strong defensive game from the Panthers. However, with the Panthers getting strong vocal encouragement from coaches and supporters the third quarter finished with Portlaoise down by five points and a partly working scoreboard showing a score of 26-21 to the home team.

Much of the last quarter remains was a whirlwind of action, as the young Panthers girls showed determination and courage way beyond their years. On the final buzzer barely heard over the shouts of the supporters the scoreboard showed teams level on 32 point apiece.

An extra two minutes was now needed to separate the teams, and Portlaoise scored first putting Kilkenny in a position they hadn’t seen all during the game.

But level the game they did, two minutes ticked slowly by but the game was anything but, as end-to-end action saw Portlaoise get the upper hand and a well-taken basket saw them go two point ahead with 30 seconds left.

Kilkenny were unable to break through the Panthers defence and with the buzzer signalling the end of the game the Panthers were crowned 2018 cup winners.