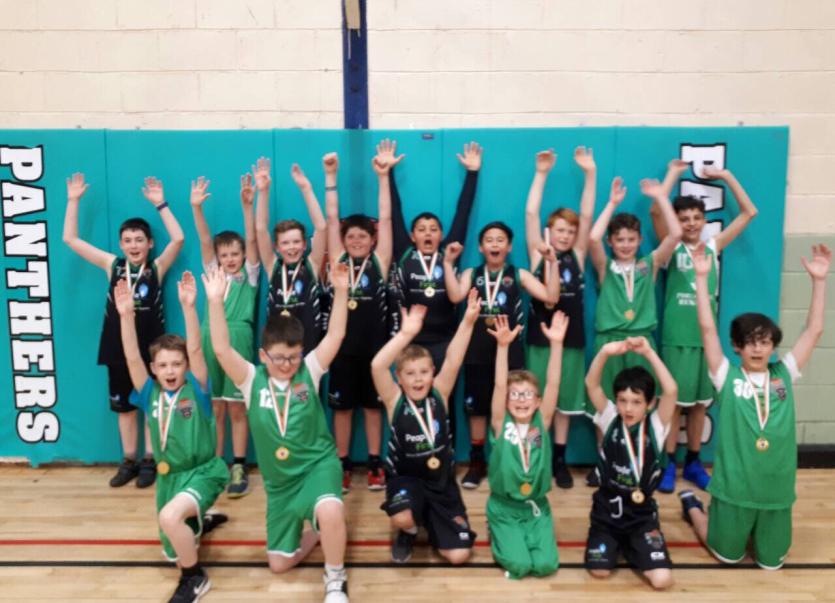 The Portlaoise Panthers U-12 Black and Green teams.

Last Saturday Portlaoise Panthers hosted an U-12 tournament in St Marys Hall. They had teams from Larrie Birds, Kildare Gliders and two home teams , the green team and black team.

To start with there was a mini tournament with each team playing each other. The buzz and noise in the hall created an unreal atmosphere. A lot of players were playing their first competitive tournament, so this was a day to remember for them.

After the prelim stages both Portlaoise teams came out on top. Larrie Birds and Gliders played a very exciting plate final. It was a draw match the whole way with players really finding their rhythm.

In the end the more experienced Gliders pulled away and won by two baskets.

In the final game of the day the Portlaoise Black team played the Portlaoise Green. So great friends off the court became rivals on court. There was very little between both teams and a healthy rivalry ensued for the game with tenacious defending and great outside shooting.

The Black team eventually pulled away, but the future is looking bright for the club with the skill level shown.

Many young boys made their debut and after four games on the trot they never gave up till the final buzzer. In the end all players and four teams received a medal on a day where participation and fun were foremost , with many memories made.