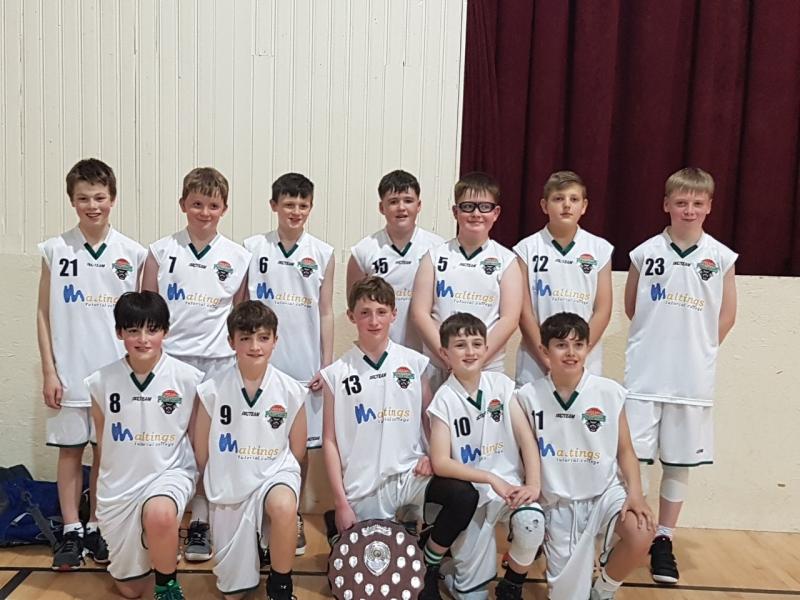 The Portlaoise boys U-13 basketball team travelled to Kilkenny to play Old Leighlin in this year's Kilkenny Area Cup Final.

The game started at a hectic pace with both teams playing well with good running basketball, Portlaoise got scores through Cillian O'Connell and Brochan O'Reilly. They also continued to work hard with strong man to man defensive coming from Rory Tully and their Captain Jack Byrne.

As the quarter went on their was nothing between the teams with the lead changing hands on a few occasions. Cillian O'Connell was finishing well for Portlaoise as he put nine points on the scoreboard in this quarter after good work from his team mates John Hruscovhi and Rory Tully to see them lead by two points.

The second quarter saw a new five players from each club take to the floor but the game lost none of its intensity as both teams played well.

Portlaoise got the first couple of baskets through Patrick O Callaghan and their ball handler Cathal Mc Evoy. Old Leighlin while playing well found it hard to get into good shooting positions because of some excellent defensive from Eoin Murphy and Patrick Fitzpatrick.

As the quarter went on Portlaoise for the first time began to dominate with good movement of the ball resulting in fine scores from Patrick O Callaghan and a big three pointer from Cathal Mc Evoy to the delight of the large group of traveling supporters.

As the half-time whistle approached Portlaoise had put 13 points on the scoreboard and at the other end restricted Old Leighlin to a single point in the quarter with a huge defensive work rate coming from their base players David Harrington and Patrick O'Callaghan to help their team to a 15 point lead. Old Leighlin came out strong at the start of the second half to get the first couple of baskets to reduce the gap.

Portlaoise continued to work hard and were eventually rewarded with baskets from Cillian O'Connell and Jack Byrne. Portlaoise had introduced a couple of new players in this half, Riley Comerford and Tony Walsh with both putting in good performances.

Old Leighlin were also playing well and finished the quarter strong with a couple of fine scores to reduce the gap down to 10 points. The last quarter saw scores at a premium for the first couple of minutes with both defensives on top, David Harrington and Eoin Murphy were putting in great performances to deny the Old Leighlin lads any scoring opportunities.

Portlaoise continued to work hard and were rewarded with baskets from Eoin Murphy and Cillian O'Connell who was eventually to be top scorer of the game with an excellent 14 points.

Portlaoise finished the stronger team as they went on to control the last couple of minutes with scores coming from Jack Byrne after good work from David Harrington and Cathal Mc Evoy to help their team go on to a well deserved Cup Final win.