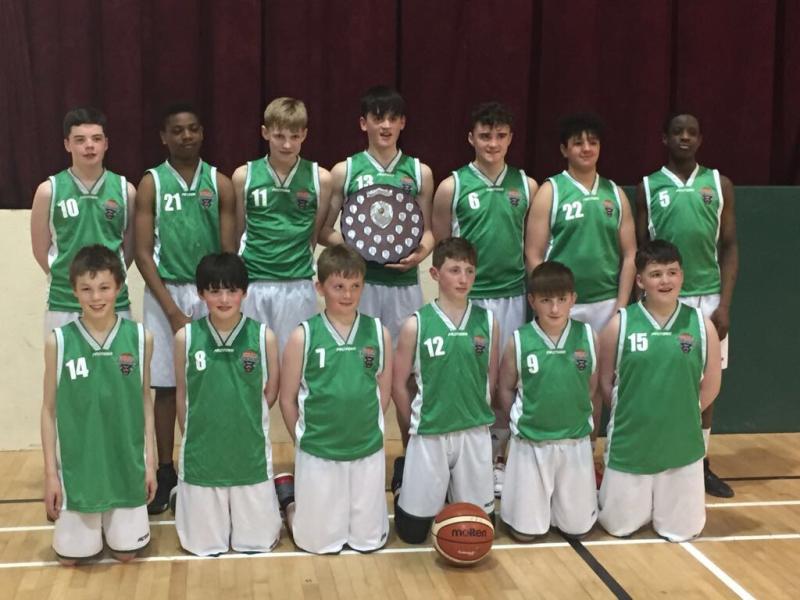 The Portlaoise Panthers U-15 team.

The Portlaoise boys U-14 basketball team travelled to Kilkenny to play Old Leighlin in the Kilkenny Area Cup Final.

Old Leighlin started the better with the first couple of baskets. Portlaoise were slow to get on the scoreboard despite good work from Matthew Coonan and Cillian O Connell.

They continued to work hard and were eventually rewarded with baskets coming from Aaron Dooley and Eamonn Sam Rahi. As the quarter went on both teams were playing well, exchanging baskets, Brochan O Reilly finished well for Portlaoise after good work from Cillian O Connell and Eamonn Sam Rahi.

The second quarter saw a new five players from each club take to the floor and it was Portlaoise who settled quickly with baskets coming from Barry Fitzpatrick and Dylan Cahill to open a six point lead.

Old Leighlin were struggling against the huge defensive pressure as Portlaoise went on a full court press turning over the ball on several occasions resulting in baskets from Jason Alade and Michael Gilsenan.

As the half-time whistle approached Portlaoise were in full control and went on to open up a significant 15 point gap after great work from their ball handler Cathal Mc Evoy resulting in scores from Barry Fitzpatrick and their Captain Dylan Cahill.

The first few minutes of the second half saw baskets at a premium as both defensives were on top. Portlaoise had introduced a couple of fresh players Eoin Murphy and Jack Byrne to good effect as both were putting in good performances. As the quarter went on both teams put points on the scoreboard with Amaan Sanni and Barry Fitzpatrick scoring for Portlaoise.

Old Leighlin went on a full court press of their own to try to bridge the gap but Portlaoise showed good composure to pass through it and finish with baskets from Barry Fitzpatrick who was putting in an MVP performance.

The last quarter saw Portlaoise control the game as they maintained their lead with Aaron Dooley getting two unanswered baskets to see him top scorer of the game with an excellent 10 points.

Old Leighlin to their credit never gave up battling for every ball but they could not find a way through the bigger and stronger Portlaoise team. In hindsight the game was won and lost in the second quarter where Portlaoise put 19 points on the scoreboard but only conceded four points.

Portlaoise finished the game the stronger with the last basket coming from Amaan Sanni to see his team go on to a well deserved win. This win sees the boys finish a very successful season winning both the Midland Area Top 4 Final and the Kilkenny Area Cup Final.