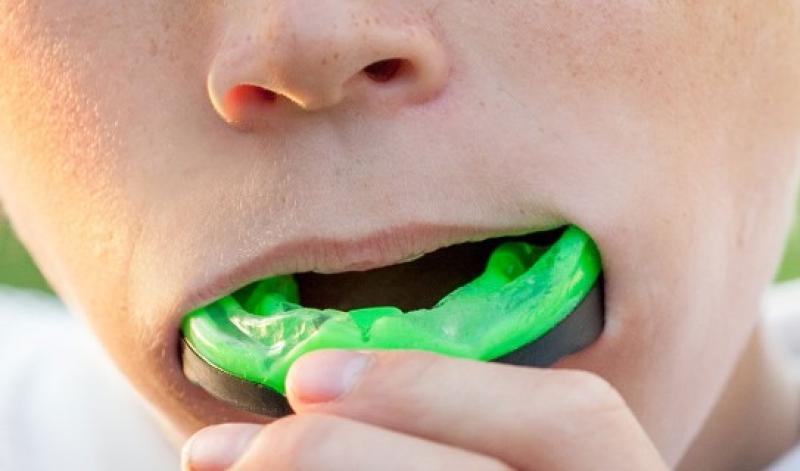 A dentist who specialises in treating sports injuries has warned that up to 20% of players of contact sports will undergo serious dental trauma during their playing careers.

Dentist and former pentathlete Sally McCarthy says that while the percentage of GAA players wearing mouthguards is almost 100% - the GAA made mouthguards compulsory in 2014 - in rugby she has come across situations where the figure can be as low as 80%.

McCarthy said the reason many players don’t wear them is discomfort, breathing and communication difficulties or because they cause gagging. She said customised mouthguards provided solutions to these issues as well as offering the best protection.

“Besides the physical pain it’s estimated that lifelong treatment for serious dental trauma can cost between €5K and €20K. Using a mouthguard can help avoid chipped or broken teeth, nerve damage to a tooth or even tooth loss. They also limit the extent of injuries to lips, tongue and the soft tissues of the mouth.”

Dr McCarthy, who is a member of the Academy of Sports Dentistry and International Association of Dental Traumatology, was commenting on the issue of dental trauma at the Irish Dental Associations annual conference in Galway which took place at the weekend.

“Several national sporting bodies need to recognise their role in protecting their members long term oral health by making the wearing of mouthguards compulsory. For example, while mouthguards are strongly recommended by the IRFU and recommended by Hockey Ireland they are not mandatory.”

“Basketball Ireland and Horse Sport Ireland leave it to personal choice while they are not compulsory for the FAI and the Turf Club have no policy. Others who participate in sports or activity which pose a risk of injury to the mouth like gymnastics, mountain biking or skateboarding, would also benefit from wearing a mouthguard” she said.

McCarthy believes that while ‘boil and bite’ type mouthguards can be used by children aged 6 to 12 whose teeth are not fully developed, these must be remoulded or customised by a dentist to achieve an adequate level of protection.

“‘These customised ‘Boil and bite’ type guards should be viewed as ‘transitional’ appliances until such time as the teeth have fully developed. Poorly fitting ‘boil and bite’ mouthguards can actually increase risk of trauma, particularly to the lips, upper jaw and tongue. All the scientific evidence shows that the only effective mouthguards for adults is one which is custom-made and professionally fitted.”

“Constantly sipping sugary drinks or consuming snacks with a high sugar content has a dissolving effect on tooth enamel. Each time the saliva neutralises the sugar to protect the teeth, it is hit by another dissolving dose of sugar. Children should not be given sugary drinks after training. Water and a non-sugary snack such as a sandwich or wrap is fine and this would reduce the overall exposure of teeth to sugar.”

“For adults engaging in intensive activity any post-training sugar should be taken over a short period of time (like a sugar gel) and followed by a neutralising protein / carbohydrate meal or shake. Snacks should not be sugar or fruit based. Most players are at a higher risk of suffering decay/infection through diet than sustaining an injury and so making the above changes would have a very positive effect on their overall dental health and sporting performance” McCarthy concluded.