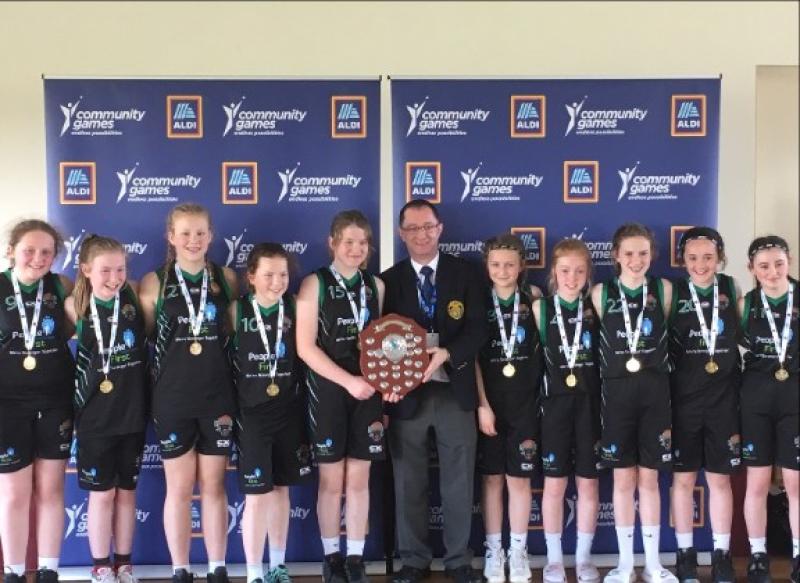 The Portlaoise team which claimed the Community Games title.

Portlaoise U-13 girls travelled to Trim on Sunday to compete in the semi-final of the Leinster Community Games against the Meath champions Kilbride, with the winning team challenging for the Leinster title later in the day.

The Portlaoise team are made up of players from the Portlaoise Panthers Basketball Club who have had local success this season, and this competition has allowed them the opportunity to face off against the best of the other counties in Leinster with the opportunity to make it to the All-Ireland stage in UL arena at the end of May.

Both sides had played tough games to get to this point. Portlaoise had beaten the Offaly and Westmeath champions to secure their place in the semi final with Kilbride overcoming Louth and Longford champions so it was set for an exciting game.

It was a shaky start by both sides but Portlaoise were the first to get some scores on the board through determined play by Ella McNulty and Rachel Byrne. Shannon Quigley was at her best, finding Stephanie Abrama and Clodagh Power inside and both girls made no mistake with the finish.

Teagan O’Reilly and Ella Hanamy entered the game and continued to pile pressure on the Kilbride defence as they attacked the basket adding well deserved scores for their side. Portlaoise lead by nine at the half time break.

Portlaoise continued where they left off in the second half. Sadbh Bergin and Niamh Murphy made their impact on the game as they harried and harassed the Kilbride side into errors.

Leah Stanley was defensively flawless as she pulled great rebounds on both ends of the court and at the final whistle Portlaoise came out on top on a score line of 34-10.

Next up for Portlaoise was Kildare champions, Johnstown/Kill. Both sides were only one match away from a chance to play in the All-Ireland and no one wanted to go home disappointed.

Portlaoise’s inside duo of Clodagh Power and Stephanie Abrama set the tone of the game from the tip off as they asserted their dominance on both ends of the court giving Portlaoise a lead that they never relinquished.

Shannon Quigley, Rachel Byrne and Ella McNulty attacked the basket at every opportunity and the Kildare side had no reply for Portlaoise’s dominance. Portlaoise never let the foot off the pedal and this was epitomised by Leah Staney and Sadbh Bergin who pushed the ball at every opportunity to clock up scores for their side.

Niamh Murphy showed great grit and determination as she battled for every ball. Portlaoise continued to work the ball well in offence for the entire game and were rewarded by further scores from the duo of Ella Hanamy and Teagan O’Reilly.

At the full time whistle Portlaoise were deserved winners on a scoreline of 41-11 points and will go forward to represent Leinster in the All-Ireland. Well done to all involved.