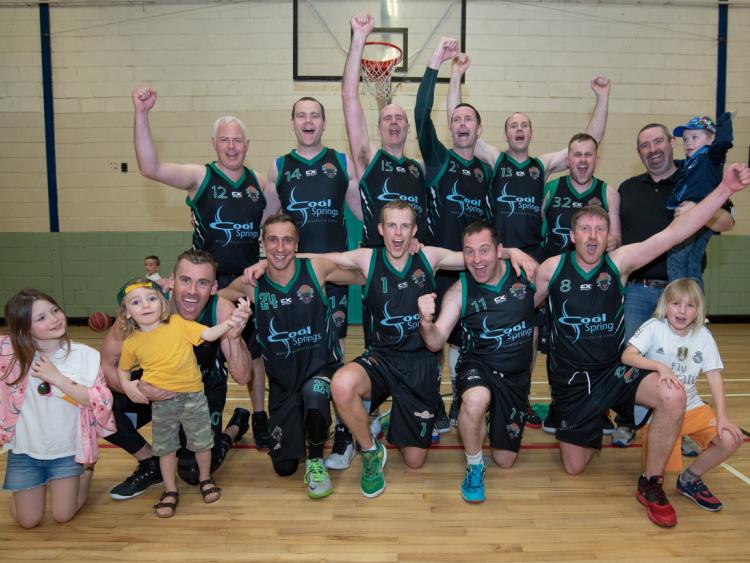 Portlaoise White, aka the veteran Senior Men’s team just edged Portlaoise Green, comprising of mostly this years U-17 Boys team plus a couple of older guys in a nail-biting climax to the Midland Area Basketball board season in St Mary’s Hall, Portlaoise at the weekend.

It was the old versus the new and the massive crowd was treated to a fantastic game. The Green team were up against it facing a team with so much size, cup final experience and downright quality.

Greg Dunne has won more titles in the Midland League than most clubs combined racking up what must be his 15th or so Top Four title with an MVP performance and 20 points. And he shows no sign of slowing down.

Then they have the mercurial Rody McEvoy who has dazzled the crowds and dizzied the opposition for over 25 years at this level and turned in another exhibition in the game. A role model for young players all over the league we will all be sad to see the famous No. 8 jersey no longer adorn the back of maybe the finest player of his generation, and watch this prince of point guards slip into retirement.

But maybe after this performance he might be persuaded to check back in for one more year. Add in Eugene Walshe, the Dunnes and Alan Burnell and sprinkle that with some relative youth in the form of the super fit and athletic Chris Higgins and this reveals the monumental task facing the up and coming young bucks.

What a privilege to experience the transition from one generation to the next as this undersized but whole of heart young group sought to unseat the old dogs. The game started nervously for both sides as the energy and noise of the boisterous home crowd had every square inch of skin in the gym covered with goose bumps from the opening whistle.

Rian O'Connell opened for Green with a lay up off the glass and this quickly followed by a two from Eugene Walshe for White driving the lane. Chris Higgins attacked every gap early on and himself and Walshe combined for 16 out of 18 points for the White team in the opening quarter.

Green struggled against their bigger opponents and found scores hard to come by early on. Pierce Bolger Hinds and Trevor Swayne tacked on a couple of scores to leave the score 18-10 after the first.

Alan Burnell used his massive frame to good effect as he dominated the boards in the second quarter pulling down rebound after rebound and finished three strong moves under the board. Kyle Burke worked very hard protecting the Green basket under the aerial onslaught and slotted in a beautiful finish to keep Green in touch.

Trevor Swayne hit a huge three and another tremendous slashing finger roll lay up just before half time to leave Green trailing 32-21 at half time.

This Green team is made of stern stuff though and where others may have wilted they dug deep and waited for some breaks to go their way and shots to drop. The speed and tenacity of this team means that they can tack on big scores in minutes and Burke, Swayne and the brilliant Liam Kinsella pulled the score back to 38 each just before the end of the quarter.

White kept bombarding the diminuitive Green team in the paint and under the boards and Greg and Tony Dunne added two tough inside finishes to leave the score 42-38 entered the last ten minutes.

Trevor Swayne is a talent maybe never seen before in Portlaoise with lateral movement that Michael Flatley would be proud of. He swooped in for steals at the midcourt and in the flash of an eye he was scything through the rim defenders to finish at the rim.

Once he heated up the scores kept coming and captain Rian O'Connell joined the action with a couple of brilliant finishes. Then the two point guard magicians Gary Morrissey and James Phelan dropped two massive threes over their giant defenders to put Green 6 points up with four minutes to play.

Greg Dunne capped his MVP performance with two huge threes of his own with defenders in his face to keep White in touch and turn the tide in this battle. Critical fouls on Kinsella and Burke who constituted Greens main height basically turned the game on its head as White were able to capitalise on their superior size advantage inside and the game was in their grasp.

Green had three chances to lead again but two missed shots and a turnover allowed Rody McEvoy to work his magic and drop his perfect pass into the hands of the electric Higgins as he sprinted in for an uncontested lay up to put White up by two with 2.8 seconds on the clock.

Higgins had to have his arm twisted to return to play this year but what a worthwhile effort because he has been the catalyst for an uptake in the performance of the White team since Christmas. Green ran a sideline out of bounds and almost pulled it off but couldn’t quite connect on the pass and the game was over. It finished 57-55 and the crowd were out of breath.

Well done to both teams on delivering such an exciting spectacle and providing evidence that the legacy of the super successful veteran team era will be continued in some style by this remarkable young bunch. A very proud day for Portlaoise Basketball Club.